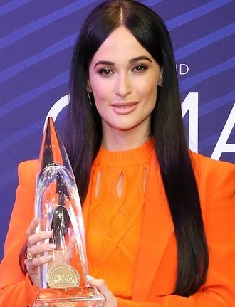 Kacey Lee Musgraves is known as American singer and contemporary country music songwriter. She was born on August 21, 1988 in Golden Texas. She garnered various music awards such as: six “Grammy Awards”, “four Country Music Association Awards” and three “Academy of Country Music Awards”. In 2007, she joined the 5th Season of Nashville Star of USA Network and finished seventh place. Before joining the said singing competition, she self-released three albums. Musgraves had two recorded singles for Triple Pop in the year 2008.

In year 2018, Kacey Musgraves Golden Hour was released and became popular across the world, thanks to her trademark Kacey Musgraves songs. The said album won the “Album of the Year” of the three major awards: Grammy Award, Academy of Country Music (ACM) and the Country Music Association (CMA) Award making Musgraves the 6th artist to win all three prestigious awards for the same album. On top of that, it won the Grammy Award “Best Country Album”, “Best Country Solo Performance” for the single “Butterfly”, and “Best Country Song” for her single “Space Cowboy”.

Kacey Lee Musgraves was born in Golden, Texas on August 21, 1988. Her father Craig Musgraves is the owner of M-Prints Printing Inc., a small printing business in Carthage, Texas, while her mother, Karen, works as an artist. Her younger sister, Kelly Christine Sutton is a professional photographer. Musgraves is a premature baby and weighed only 5 pounds.

Musgraves starts writing songs at a very young age. She was only 8 years old when she wrote her first song “Notice Me”, a song written for her elementary graduation. She learned to play music on the string musical instrument called Mandolin. At the age of 12, John DeFoore, a local musician, helped her to learn how to play the guitar which she considered as the one of the most important thing that happened in her life.

Her mother used to bring her to local music festivals where she sings western swing music. Her family supported her not only morally but also financially on her first-released album. In 2006, she finished her secondary education at Mineola High School. At the age of 18, she moved to Austin, Texas.

Musgraves continued her passion in music when she moved to Austin, Texas. She wrote songs and сomposed music on her own and created hits. She also took the chance to join the televised musical competition on the 5th Season of Nashville Star wherein she won the 7th place. Her performance on the said singing competition as well as her self-released recordings made way to sign the recording contract with Mercury Nashville in 2012. On the same year, her debut single “Merry Go Round” was released and she placed the number 10 spot on Billboard’s Country Airplay chart in March 2013.

Also in March 2013, she co-produced “Same Trailer Different Park” with Shane McAnally and Luke Laird and ranked second on Billboard's Top 200. The album is one of the most acclaimed contemporary country music and was certified gold. The two singles in her album “Blowin' Smoke" became a hit while "Follow Your Arrow" won the Country Music Association Award (AMA) Award “Song of the Year”.

The success of her album paved the way for her to be one of the hottest stars in the country music and raised anticipation for her second album “Pageant Material. In June 2015, the album “Pageant Material” was released and reached number three on the Top 200 and gained favorable reviews. It features the lead single, "Biscuits" which placed 41st on the Country Airplay chart and “Dime Store Cowgirl”.

In October 2016, Musgraves released her Christmas-themed album “Very Kacey Christmas”. In 2017, she started to work on her third album of “Original Material”. Her multi-awarded album “Golden Hour” was released on 2018. In 2019, the album won the three esteemed Grammy Award, Academy of Country Music (ACM) and the Country Music Association (CMA) Award for “Album of the Year”. In addition to that, it won the Grammy Award “Best Country Album”, “Best Country Solo Performance” for the albums single “Butterfly”, and “Best Country Song” for her single “Space Cowboy”.

Kacey Musgraves’s awards in the music industry are tremendous. In the year 2013 she got nominated in “Choice Female Country Artist” of Teen Choice Award. Then, in 2014, she garnered awards and nominations on Grammy Awards. She bagged “Best Country Album” with her world-renowned album called “Same Trailer Different Park”. Her song “Merry Go Round” garnered the “Best Country Song” while “Mama’s Broken Heart” is a nominee for the said award. In addition, she got nominated as “Best New Artist” Grammy Award.

Finally, after of the number of times of being a nominee, she won the “International Artist Achievement Award” of the Country Music Association (CMA) Award as for the year 2019.

In 2014, Musgraves admitted during her interview with ABC Radio that she had a relationship with her friend and band mate, Misa Arriaga, for a couple of years but broke up thereafter.

In May 2016, Kacey Mustgraves and her future husband Ruston Kelly started dating. The song entitled “Butterflies” from her album Golden Hour was written and inspired by her courtship with her boyfriend, Kelly. The two got engaged on December 24, 2016 and got married last October 14, 2017 in Tennessee.

Kacey Musgraves’s tour and albums made her one of the most popular and unique contemporary country music songwriters and singers. According to Celebrity Network, Musgraves has a net worth of around $10 million.