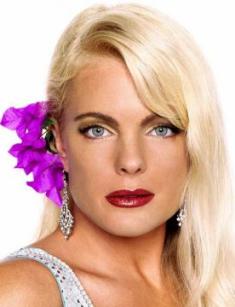 The American actress Erika Eleniak debuted on the big screen early: the 12-year-old artist appeared in Steven Spielberg’s E.T. the Extra-Terrestrial. She also received one of the lead parts in the series Baywatch at 20. However, the promising start turned out to be the peak of the career.

Overall, Erika has appeared in more than 40 movies and series, none of which brought the same success as she had in the early 1990s. Today, Eleniak continues to play, teaches drama, and brings up her “main project”, the daughter Indyanna.

Erika was born on September 29, 1969, in Glendale, not far from Los Angeles. The girl was the first child in the family. Her father came from Canada and had Ukrainian roots; the American mother’s ancestors lived in Estonia and Germany. Later, Erika’s three younger sisters and a brother were born.

Erika’s parents divorced, and the mother was anxious about her daughter’s education. For this reason, the girl did not take more than two projects a year. She debuted in the 1980 commercial video for Star Wars Underoos that produced children’s underwear. Soon, the young actress played in several videos and successfully auditioned for Steven Spielberg’s E.T. the Extra-Terrestrial; she had an episodic part there.

Before Erika graduated from school, she played only minor roles. She participated in five TV movies and series including the sitcom Charles in Charge; her future Baywatch colleague Pamela Anderson also appeared in this project. Besides, young Eleniak played in the 1988 horror The Blob.

In July 1989, Playboy editors selected Eleniak the Playmate of the month. The actress was wearing the famous red swimsuit – by that time, she had joined the cast of Baywatch. The role of Shauni McClain made the artist internationally famous; however, she left the show at the beginning of the third season.

The media and fans were proposing various theories. Some believed that Eleniak wanted more money, and the producers did not give it to her. Others were convinced the woman did not like provocative outfits: her character often wore a jacket over a swimsuit.

In 2012, Erika gave an interview to Esquire and confessed she did not appreciate the show format changes. It used to be a serious project, like those about doctors or police officers who saved people’s lives; later, it was more about sheer amusement. Pamela Anderson replaced Erika.

Following the long TV period, Eleniak appeared in the action Under Siege. Steven Seagal personified the main character; Tommy Lee Jones got the role of his opponent. Erika played the woman who became the Playmate of the Month in July 1989.

1994 was marked with the comedy Chasers starring Erika Eleniak, Tom Berenger, and William McNamara. However, the audience gave the project a cold shower.

The actress was still popular in cinematography and television and worked on many projects in the 1990s and early 2000s. Still, they either passed by unnoticed or failed. This is what happened to the sci-fi fantastic horror Dracula 3000 (2004). The legend about the vampire is set in the high-tech future where people travel across the galaxy. Van Helsing (Casper Van Dien) is a captain of a spaceship; 35-year-old Eleniak personified the vice-captain Aurora Ash. Despite the original idea, the movie was a failure; the majority of critics gave unfavorable reviews.

In the second half of the 2000s, the artist participated in reality shows mostly. In 2005, one could see her in The Real Gilligan’s Island. The next year, Erika joined the fourth season of Celebrity Fit Club that consisted of two teams competing: overweight actors, singers, and TV personalities were trying to lose some weight faster than their opponents.

In 2010, Eleniak came back to episodes in movies and series. She played in CSI: Miami and Desperate Housewives. 2014 brought the movie The B Team.

Erika Eleniak often had romances with her colleagues. When Baywatch was filmed, the woman dated the actor Billy Warlock; the press speculated about her affair with William McNamara when Chasers was premiered. The rumors became even more frequent when the couple co-starred in Girl in the Cadillac the next year.

The woman met her future partner Roch Daigle at the movie set of the thriller Snowbound (2000). Roch was a crew member. The first pregnancy failed; however, Erika gave birth to the daughter Indyanna in 2006. The family used to live in Daigle’s home city, Calgary, but Eleniak moved to California later.

Erika’s height is 5.51 feet (168 cm.); her weight is changeable, and the artist tries to lead a healthy life. The celebrity often shares pictures on Instagram. However, there are no photos without makeup except for some childhood moments with sisters.

The movie Marilyn Monroe Back? is on the pre-production stage now; Erika Eleniak will play the main character. The melodrama will tell the story of the Canadian singer Sherrie Lea Laird who is considered to be the reincarnated famous blonde.

The actress spends all free time with her child. The actress confessed in one of her interviews she used to dream about having a daughter when she was a little girl. Besides, the artist teaches acting.