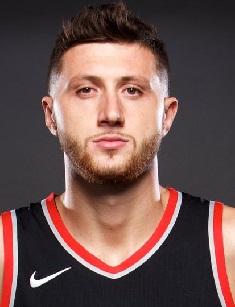 Jusuf Nurkic is an American professional basketball player from Bosnia and Herzegovina. The sportsman is currently playing for the "Portland Trail Blazers" in NBA. The Chicago Bulls team chose him in the 2014 draft. Also, Nurkic represents Bosnia and Herzegovina in international competitions.

Jusuf Nurkic was born in Bosnia and Herzegovina on August 23, 1994.

Jusuf's father is a policeman in Tuzla, Bosnia an Herzegovina. According to the basketball player's words in an interview, his dad, Hariz Nurkic, is a massive man whose height is 7ft 2in (2,15m) and weight is 353lb (160kg). Hariz himself was interested in sport and wanted to play basketball in youth but couldn't find sneakers of 56 size. That's why he left the basketball fantasies.

When Nurkic was 14, the sport agent from Bosnia Enes Trnovčević took him to Slovenia and allowed him to try out playing. Due to it, the boy became interested in basketball.

His first professional contract Nurkic signed in 2009. According to him, earlier he had never left his home, family, and parents for such a long time. But then he had to live in another country, learn a foreign language and get to know a new culture.

Being a teenager, he played in the youth categories for the Slovenian team Zlatorog Laško.

In February 2012, he played for the Union Olimpija in the international youth competition Nike which took place in Belgrade.

At the beginning of the career, Nurkic recorded 18,8 points and 11 rebounds per 5 games. Later, after playing in Belgrade, he left Zlatorog Laško. He announced his decision to play for the Slovenian team Cedevita.

In October 2012 the player signed a four-year contract with the Cedevita club. In his debut season, Nurkic's coacher was Aleksandar Petrović. In the Euroleague, the sportsman averaged 1,8 points per game. In January 2013, Nurkic was transferred for some time to Zadar. In the next season, he trained with the coacher Jasmin Repeša and purposefully improved his results. So, in the regional Adriatic League, he averaged 11.6 points and 5.6 rebounds per game. In 2014, the player was nominated for the FIBA Europe Young Player of the Year Award.

On June 26, 2014, Chicago Bulls chose Nurkic in the NBA draft. One month later, the team sold the player.

After the trade, on July 31, 2014, Jusuf signed the contract with the Nuggets team. On October 29, 2014, he played his first NBA game and managed to record 6 points and 7 rebounds. It was the match against the Detroit Pistons, Jusuf's team defeated it with the score 89-79. On January 1, 2015, Nurkic made his first career double-double: 10 points and 10 rebounds. However, the team lost this match.

The next game happened to be successful for the player: 2 days later, Nurkic made the second double-double: he recorded 11 points, 10 rebounds, and 5 blocks and helped the Nuggets defeat the Memphis Grizzlies with the score 114-85. In February Jusuf made two more double-doubles.

The team's government hoped Nurkic to participate in the 2015 Rising Stars Challenge as a replacement for Steven Adams, the player of the Oklahoma City Thunder. Nevertheless, Nurkic denied for some personal reasons.

In the final season game against the Golden State Warriors, he recorded 17 points. Later the player injured a knee and had to undergo surgery. The treatment went successful, and Jusuf could come back to games. On October 11, 2015, Nuggets signed a one-year extension with the player. On January 12, he made his debut in the 2015-2016 season but injured left patellar tendon.

April also brought the sportsman suсcess: he made 21 points in the win over the San Antonio Spurs

Half a year later, Nurkic set a new career record: he recorded 23 points in the match against the New Orleans Pelicans. His results helped the team win the Pelicans over. 5 days later, in the game with the Toronto Raptors the basketball player made 18 rebounds.

Nikola Jokić, a team's player, became a starting center, and Nurkić was demoted to the bench. The sportsman didn't agree with the measure and tried to change the situation by voicing his displeasure. However, the team's government granted Nurkić wish only ten days before the 2017 trade deadline

On March 9, 2017, in the match against the Philadelphia 76ers, the player made 28 points and 20 rebounds. As a result, he became the first NBA basketball player to record not less than 28 points, 20 rebounds and 8 assists since Charles Barkley did it in November 1986

On March 28, 2017, Nurkic set a new career record of 33 points and 16 rebounds. Three days later, he got a non-displaced fracture in his right leg and was ruled out for the rest of the regular season.

Subsequently, Nurkic missed 9 games and got back to the playing on 22 April 2017. In the match against the Golden State Warriors, he recorded 2 points and 11 rebounds

On July 6, 2018, Jusuf signed a contract with the Trail Blazers again. His current salary is evaluated at $11,111,111. On October 28, 2018, the player made 22 points and 18 rebounds in the match against the Washington Wizards. On November 20, Jusuf Nurkic recorded 13 points and 11 rebounds and made his best fifth straight double-double

On January 16, the player recorded his first career triple-double of 10 points, 10 rebounds and 10 assists in the match against the Cleveland Cavaliers.

On March 25, 2019, highlights of every sport media reported: Nurkic got a compound fracture of his left tibia and fibula in the second overtime of the Trail Blazers, 148–144 win over the Brooklyn Nets. According to the latest news, the sportsman underwent a serious surgery, and now his health is stable. However, there is no information about his return. Before the injury, the player had recorded 32 points and 16 rebounds.

The sportsman played a minor role in the senior team of Bosnia and Herzegovina during the FIBA EuroBasket 2013 qualification.

Nurkic represented the national basketball team of Bosnia and Herzegovina during Eurobasket 2017 qualification. His average results were 19,2 points, 13,5 rebounds and 1,0 blocks per game.

Today Jusuf is not married. However, he has a girlfriend – Emina Duric. The woman is also from Bosnia.

Nowadays the shirts and jerseys with printed Nurkic's name are trendy. American teenagers and football fans wear clothes with pleasure; the prices vary from $20 to $150.

He came from Bosnia

He’s got the game

We call him Bosnian beast

He can assist, he can score

In the box, he’s amazing

Nurk is on fire

At present it's not known for sure how much is Nurkic's net worth.

In his career, Nurkic showed perfect stats and was nominated for several titles such as: