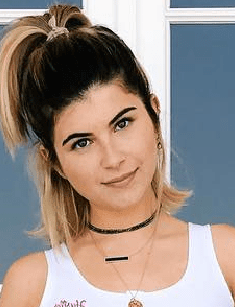 Isabella Rose Giannulli is a social media person, model, and actress. She is an elder daughter of Lori Loughlin and Mossimo Giannulli who are occupied in acting and fashion fields. Isabella’s first role was Mia Walker in the movie “Every Christmas Has a Story” (2016) in which she starred with her mother.

Isabella Rose was born in 1998 in Los Angeles. Her parents are Mossimo Giannulli, a fashion designer, and Lori Loughlin, an actress. She also has an older half-brother, Gianni Giannulli, and a younger sister, Olivia Jade, who has a popular YouTube account and she is considered to be a beauty influencer. So, as we can see, every member of Giannulli family is talented and famous. Isabella’s dad shared with her the sense of style, her mother always helps her with auditions, and she was the one who suggested both Isabella and Olivia to go to the acting classes.

Isabella graduated from Marymount All Girls Catholic High School in Los Angeles, California, where her sister also studied and then went to the University of Southern California, where she got in an unpleasant position; about this, you can read a little bit below.

Isabelle certainly follows in her mother's famous footsteps in both in modeling (her body measurements are 32-25-34 inches) and acting career. She appeared in movies “Every Christmas Has a Story” (2016) and “Homegrown Christmas” (2018) together with her mom. There is no long list of movies where Isabella has starred, but she is so young now, so we are sure that her acting career will develop more and more.

Isabella has a net worth of $500 Thousand that she gets mostly from her acting in movies and appearing on television shows.

In 2018, Giannulli’s family was involved in the college admissions bribery scandal. This scandal has been going from 2011 to 2019, and the fact is that parents paid a lot of money to the college admissions counselor who arranged the fact of their children entering the top universities. Lori and Mossimo paid $500,000 to the Key Worldwide Foundation as a donation, but, in fact, that was a bribe. It is unknown whether Giannulli’s kids had any relations to this conspiracy or maybe they did not know at all.

Both Olivia and Isabella are currently the students at the University of Southern California, but, of course, this accident had some kind of impact on the whole family’s career. Lori Loughlin was cut of the Fuller House by Netflix, and also the company named Hewlett Packard refused to continue the advertisement company with Loughlin and Olivia. Besides Hewlett Packard, Sephora that used to collaborate with Olivia all the time stopped their work with her too. Also after that, Isabella’s rather popular Instagram profile became private, before that the number of her followers was around 262 thousand.

Olivia did not make her account private; generally, she seems more wild and open that her older sister. On Olivia Jade's Instagram, we can see a lot of photos in fancy dresses on parties, in a bikini somewhere in Italy and so on. And if we compare the attitude of two sisters to education, we can make a conclusion that Isabella is much more full-grown in that case. We say that because on Olivia's YouTube channel you can find a video where she and Isabella are answering questions from admirers, and one of the questions was how to balance the social media life and school. Olivia responded that she didn't balance at all, she made YouTube more priority than school, and Isabella said that this kind of prioritization is not right and she though in the opposite way.

If we continue the topic of the relationship between Isabella and her sister, Olivia, it can be said that they are almost the same age, and they are rather close. We can see Isabella appearing from time to time in some of Olivia's YouTube videos, and she also had her own fashion blog named “Because I’m Bella," which she stopped running after the bribery scandal connected to her family. By the way, Bella is Isabella’s nickname.

When sisters were kids, people always used to think that they were twins: they had the same color of hair, the same smile and so on. In some time, they grew up and changed, of course. They have different life goals: Olivia Jade likes running her YouTube channel, making overviews on cosmetics and one day, she wants to open her own skin-care company. Speaking about Isabella, she is less open about her thoughts at all, but what we know for sure, is that she would like to continue developing an acting career and graduate from university, because, as we said before, she thinks education is essential.

Speaking about Isabella’s love life, we do not really know anything. She prefers to keep her private life in secret, so she has not ever posted any photo with a guy who looks like her boyfriend, and there have never been any rumors about her. However, she seems to be close to her friends Andrew Beyer and Nick Penske, but that’s all. Well, maybe there is a boy who has a tattoo with Isabella’s name on his shoulder, we do not know… Anyway, Isabella is more focused on her acting career, friends and family and also on her main hobby – traveling.

Isabella’s family has been moving a lot: in 2015 her parents sold their residence in California for $14 million and house in Beverly Hills for $18 million, then, in 2018 they put on sale another house in Bel Air for $40 million. Well, if Isabella likes traveling, then moving should not be a problem for her!