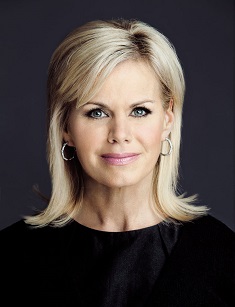 Gretchen Elizabeth Carlson is an American commentator, journalist, and writer. In 1989, she became Miss America, and in 2017, the Time Magazine included her on the list of the 100 Most Influential People In The World. For now, she has written books titled Getting Real and Be Fierce, which profits go to her charitable fund.

Gretchen Carlson was born in Minnesota in 1966. Her parents were Karen Barbara and Lee Roy Carlson, who owned a car dealership. Gretchen also has siblings: two brothers and a sister. By the way, one of Gretchen's nannies was Michele Bachmann who later became a Republican congresswoman. Speaking about her education, she graduated from Anoka High School and Stanford University. When Gretchen studied at her university, she spent a year studying abroad, at Oxford University.

As a child, Carlson started playing the violin. She had success while winning various local and national competitions and performing as a soloist with Minnesota and Saint Paul Chamber Orchestras.

In 1988, Gretchen became Miss Minnesota, and later she turned out to be the third woman from Minnesota who won the Miss America title.

Carlson's television career started in Virginia when she was a political reporter for WRIC-TV. She gained recognition on TV after becoming a co-author of The Early Show on CBS together with Russ Mitchell. In 2002, Gretchen started working on this show. Before her job at the CBS, she worked as a reporter for KXAS-TV in Texas and WOIO-TV in Ohio.

Later, Carlson became a weekend host for the news and talk program Fox & Friends. But soon enough, she also took the weekday spot. Gretchen was a co-host together with Steve Doocy and Brian Kilmeade. In 2013, she left the Fox & Friends and took The Real Story with Gretchen Carlson. Her place was taken by Elisabeth Hasselbeck who had left The View.

In 2016, Carlson announced about her end of the contract with Fox News. Also that time, she filed a lawsuit against its chairman, Roger Ailes, due to the sexual harassment. Gretchen also wrote about it on her social media pages like Twitter and Instagram. This situation gained huge media coverage and also got a lot of attention from the attorney, Nancy Erika Smith.

After Gretchen's announcement, six more women came to the New York magazine and told about Ailes' actions with them. Eventually, Ailes resigned and 21st Century Fox settled the lawsuit with Gretchen for approximately $20 million.

In January 2019, Carlson started hosting her own documentary specials called Gretchen Carlson: Breaking the Silence. It is focused on various stories about workplace sexual harassment. The story with Roger Ailes is demonstrated in The Loudest Voice, a television miniseries, where Carlson is played by Naomi Watts.

By the way, it is often asked if Tucker Carlson is related to Gretchen. Well, in some way – they have the same last name, and they both worked with the Fox News. Besides, Tucker is also a political commentator, a conservative one.

Carlson has a net worth of approximately $16 million which she mostly got from her work at TV and the lawsuit. Speaking about her current job, Gretchen works on her Breaking the Silence.

In 2018, Carlson was elected to be on board of directors at the Miss America Organization. In a few months, 22 states voted that they did not have any confidence in Gretchen and demanded her resignation. This started after some of the board members had resigned by force. Former members named similar reasons like toxic atmosphere and Carlson's actions that were exceeding authority.

Not only Carlson was demanded to resign but also Regina Hopper, a Chief Executive Officer (CEO). It was claimed that they both had changed the leadership while other board members had not agreed. Eventually, in June 2019, Gretchen resigned.

Since 1997, Gretchen has been married to Casey Close a sports agent and also a former basketball player. She and her husband have two children: a daughter Kaia and son Christian.

Both Gretchen and Casey are active members of society. They are teachers at the Sunday school at First Presbyterian Church in Greenwich, where they live, by the way.

Carlson actively supports various organizations which are connected to the rights of women. She founded the Gift Of Courage Fund in 2017 and created the Gretchen Carlson Leadership Initiative, a program that had an aim to make American women more involved in promoting legislation and policies with benefits for women and children.

Besides, Carlson has been a supporter of Miss You Can Do It for a long time. It is a non-profit organization for women with special needs which was founded by Abbey Curran, a former Miss Iowa who was born with cerebral palsy.