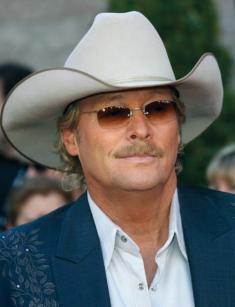 Jackson, a musician creating music in country style, has never betrayed the traditions of this genre. Being devoted to the genre, he has managed to become one of the most famous country singers. In spite of ordeals life gives him pretty often, the musician keeps doing his favorite thing – writing songs and performing them for fans. Are you interested in Jackson’s life? Read below his full biography!

Alan was born and raised in the family of Ruth Musick and Gene. He was not the only kid of them – he had four siblings. The family has always had financial problems, and the children had to take up jobs at an early age. So, Alan served at a local store and studied at the same time.

As for Alan's ethnicity, he was generally of English ancestry.

He became interested in music due to the gospel – he liked listening to divine songs from the very infancy. As a result, it became his favorite music genre. Besides, he had an idol, John Anderson – his style of music influenced Alan's creativity hugely.

Young celebrity left for Nashville to put his dream of becoming a recognized musician into reality. Having moved there, Jackson was hired to a TV channel which promoted music by country singers. So, he was responsible for managing the post office.

Around that time, Jackson got acquainted with Glen Campbell – a prominent country musician – he contributed to the start of Alan's career. So, he introduced the musician to a music label – and they signed a deal. In 1989 Jackson, under the label's guidance, presented the songs' Blue Blooded Woman' and 'Here in The Real World.' That time he got his first fame for publishing the collection 'Don't Rock The Jukebox.'

At the beginning of the 1990s, Alan Jackson presented a new album 'High Lonesome.'

Several years later, the musician pleased his fans by one more album entitled 'A Lot About Livin' (And a Little 'bout Love)' – the project is thought to be one of the best his works.

The year 1994 was full of events for the singer. Firstly, he presented his new collection, 'Who I Am.' Besides, due to a deep meaning of the track 'If I Could Make A Living' advanced to the top of a famous music countdown.

The following year, he published a compilation of his legendary tacks – it was named 'The Greatest Hit Collection.' In 1996 fans could listen to his new album under the name 'Everything I Love.' That time his single 'Little Bitty' dedicated to Tom. T. Hall came out.

1999 brought the musician his 7th collection. That time there was a popular tendency in music – rock style was merged with country one. However, Jackson didn't follow this all the rage creating his projects in country style only.

2002 was marked by Alan Jackson's new collection 'Let It Be Christmas.' The following year, he introduced the track 'Timeless and True Love' co-written with Jeannie Kendall and the song 'Remember When' to the world.

Jackson's repertoire was mainly full of country music albums. That time he decided to diversify his creativity and presented his first album consisting of gospel singles – it was named 'Precious Memories.' The work, released in 2006, was dedicated to his mom.

At the beginning of 2011, the musician left the label he had been working with for a long time. Several months later, he was signed to another recording company.

2012 brought him a new project – the collection under the name 'Thirty Miles West.' Its most popular singles are 'Long Way to Go,' and 'You Go Your Way' – however, they failed to get to the top 10. The following year, he embarked on a tour as a promotion of the album.

The year 2014 was Jackson's career 25th anniversary. In honor of the date, the singer went on a tour named 'Keeping It Country.'

Autumn 2017 brought him new tracks 'The Older I Get', 'Boats to Build' and 'Amazing Grace.'

Currently, Jackson is touring the country – his next concert will take place in Charlotte, North Carolina.

Alan Jackson’s net worth is evaluated at $80 million.

As for Jackson's relationship, he has a wife – Denise. They tied the knot in 1979. The two got acquainted while being school students and began dating. Nowadays, they are parents of 3 kids.

In 2018 Jackson had to get through a horrible tragedy - one of his children, Ben Selecman (his son-in-law), was killed in a boating accident. Having fallen from a boat dock in Florida, the man died.