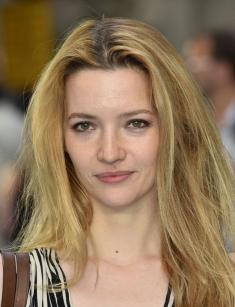 The British actress is known for the films Pride & Prejudice, Inception, the TV series Doctor Who, Westworld and others. She is the ex-wife of the billionaire and founder of SpaceX Elon Musk.

Talulah attended Cheltenham Ladies' College, Berkhamsted Collegiate School and then studied for a degree in Natural Sciences at the Open University.

Her father helped her to perform in the movies. He changed his activity and began to write scripts for the series.

In 2005, Talulah Riley starred in the movie Pride & Prejudice, which is based on the novel of Jane Austen. The actress played the role Mary Bennet, one of the sisters of the main character, Elizabeth Bennet. The girls were born in a family of small nobles, they have no brothers and it worries their parents, who do not accept their daughters as heirs. Their mother tries to put the girls in good hands and send them to the dance.

The aspiring actress starred in two detective series Agatha Christie’s Poirot and Agatha Christie's Marple at the same time. Both roles were episodic. The actress appears in a series The Moving Finger, where Miss Marple investigates the case on insulting anonymous letters, that are sent to the villagers by the unknown.

The character of Talulah is a girl Meghan, the daughter of the wife of a village lawyer, who is a constant source of experiences for her mother. Talulah appears in the episode "Five Little Pigs" in the series Poirot, where she plays the 15-year-old Angela Warren, the sister of Caroline Crale, accused of killing her husband.

The actress appears twice in the British science fiction series Doctor Who in the role of the researcher Miss Evangelista. The main characters of the fourth season face with Evangelista in Silence in the Library, the largest repository of books in the history of humanity, where there is something wrong. The first episode, where Riley's character appears, is called Forest of the Dead and the second is called Silence in the Library. Evangelista is killed in the second episode.

Talulah starres in the series of comedy films St. Trinian's, where she plays Annabelle Fritton, the head of St Trinian's School and the niece of the headmistress. Annabelle is a shy girl from a good family, which connects with the world of art. The heroine gets to a boarding school for difficult teenagers, where her eccentric aunt runs everything.

The girl faces with the glamorous girls and the mafia at school, her clothes are stolen and someone puts a video on Youtube where Annabelle showers. The girl wants to escape from the mad school but joins this semi-criminal team.

Talulah also starred in the musical comedy The Boat That Rocked in the role of Marianne, the girlfriend of Carl, one of the main characters. Carl meets Marianne thanks to his godfather, who has a girl niece. The young man falls in love with the heroine and tries to drag her to bed immediately but Marianne is offended. Later, the young people put up but DJ manages to seduce her, while Carl is looking for a condom to have sex with Marianne.

In 2010, the actress appeared in the sci-fi thriller Inception, where she played the role of a blonde, the image of the girl Eames. This guy is a professional thief and imitator, who can create an image of any person. Eames is a part of Dominic Cobb's team, which is engaged in stealing ideas directly from the victim's subconscious or "implanting" foreign ideas in people on the customer's order.

A year later, the actress starred in a minor role of a model in the comedy-drama The Dilemma of Ron Howard's. The film is about two best friends, Ronny and Nick. Ronny caught Nick's wife with her lover. Both friends work on an unusually important project for their joint business at this time, so Ronny hides this fact from Nick, fearing that the news of treason will not allow the partner to work usually.

At the same time, Ronny tries to force the wife of a friend to confess on her own and she threatens to tell about the student adventures of Ronny, which can spoil the relationship with his girlfriend, Beth. In the end, the whole company is in a group therapy session.

Talulah Riley plays an episodic role in the Asgardian Nurse in the superhero action movie Thor: The Dark World. This film is a continuation of the film Thor, which was released two years earlier. The series is based on the comics of the same name published by Marvel Comics. The protagonist is God of Thunder Thor, Odin's son, falls in love with a human woman, Dr. Jane Foster. In the second film, the doctor's body is possessed by an evil force from another world, which is called the Aether. This power harms Jane Foster and Thor takes his beloved to Asgard to heal her there.

In 2010, Talulah Riley married Elon Musk — an entrepreneur, engineer, inventor and billionaire, founder of SpaceX, which produces space technology. The future spouses met in 2008. The wedding took place at Dornoch Cathedral in Scotland.

Two years later, the actress divorced with Mask but the couple got married again just a year later, in July 2013. Musk and Riley claimed in an interview that they reconciled and are going to live again as a family, along with five children of Musk from his previous marriage to the writer Justine Musk, whom the billionaire left for Talulah.

However, at the end of 2014, Musk divorced with her again. The spouses couldn't divorce immediately but Riley lived separately for six months and filed for divorce yet. The final breakup took place in 2016.

Elon Musk tried to have an affair with another actress in between marriages with Talulah, Amber Heard. In 2013, nothing came of this attempt. It pushed Musk to the second marriage with Talulah. However, Musk had an affair with Heard after the final break.

Talulah continues to appear in the series Westworld. The series is based on the science fiction film, which was released in 1973. Talulah Riley has an estimated net worth of $16 million.

In the story, the series Westworld is a futuristic amusement park, which is inhabited by androids. Rich and high-ranking guests of the park come there to realize their secret desires without fear of consequences. Talulah Riley plays the role of a robot Angela in this series, who invites visitors to the park.