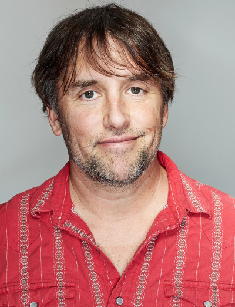 Richard Stuart Linklater is an American director and screenwriter, who has won more than fifty awards for his work. He is an author of the “Before” trilogy (Before Sunrise, Before Sunset and Before Midnight), comedy films like Dazed and Confused (1993) and Bad News Bears (2005) and drama like Me and Orson Welles (2008) and Boyhood (2014). In his films, Richard is mostly focused on suburban culture and realism.

Richard was born in 1960 in Texas. His parents were D Charles W. Linklater, III and Diane Margaret (née Krieger), who was a teacher at the Sam Houston State University.

Linklater went to the Huntsville High School, where he was a football player in a team, and then he changed his school to the Bellaire High School because of sports: in his previous school football was the main kind of sport, and Richard was better at baseball which was rather developed in his new school. Besides sports, he also received a Scholastic Art and Writing Award.

After school, Richard attended Sam Houston State University, where his mother worked, but dropped out and went to work on an off-shore oil rig. He used to read a lot on this rig and go to the theater in Houston, and that was the moment when Richard understood that he wanted to become a filmmaker. He saved money for a new camera, projector and other equipment and moved to Austin, where he still lives. In 1984, Linklater entered the Austin Community College for studying film.

In 1985, Richard founded the Austin Film Society with Lee Daniel, who was also interested in cinematography. For some years the young director has been writing scripts and making short films to gain experience. His first feature film became It's Impossible to Learn to Plow by Reading Books in 1988. It has a non-traditional plot; the main character travels around the country and makes some dialogs with others; there are no rising actions. His next project became Slacker (1990), which budget was $23,000 and the box office was $1,228,108. Linklater was entering the independent film world, when he created his third movie Dazed and Confused (1993), which, by the way, became a breakout for Matthew McConaughey.

However, Linklater's were not always as successful as you might think. For instance, his comedy-drama SubUrbia (1996) got mixed reviews and a box office of $656,747.

In the 2000s, Linklater gained wider recognition. In his films Waking Life (2001) and A Scanner Darkly (2006) the director used Bob Sabiston’s program Rotoshop to create a unique effect of animation. This feature got positive reviews for being original and well-showing the aims of the films. In 2006, Richard created Fast Food Nation, an adaptation of the bestseller that is focused on the local and global influence of the U. S. fast food industry. This film was entered into the 2006 Cannes Film Festival.

All Richard's admirers are happy because his new movie Where'd You Go, Bernadette is coming! It will be released that year, in summer.

Linklater has a net worth of $12 million which he earns from his career as a filmmaker and sometimes an actor.

Speaking about Linklater’s style and his inspiration, as he says himself, it was the film Raging Bull (1980, by Martin Scorsese) that made his career way clear. That’s what he said about it:

“It made me see movies as a potential outlet for what I was thinking about and hoping to express. At that point, I was an unformed artist. At that moment, something was simmering in me, but Raging Bull brought it to a boil.”

In 2016, the film Richard Linklater: Dream Is Destiny was released; it is dedicated to Linklater’s career and his unique directorial style. The main Richard’s specialties which were firstly shown in his debut film It's Impossible to Learn to Plow by Reading Books (1988) are lack of narrative and a minimal movement of the camera. Another documentary about Linklater was called St. Richard of Austin and released in 2004; it was produced by Channel 4, the British TV network.

In Linklater's movies, he often demonstrates the part of himself: life in Texas, the baseball that he was always fond of and so on.

Although Richard is a really popular producer and he has directed many Hollywood projects, he refuses to move to Hollywood and stays in Austin, Texas with his family. The thing is that Linklater really loves his state, and it is even shown in his works like Dazed and Confused, based on his life in high school, baseball movie Everybody Wants Some!! and others, where the life in the state is shown by the person who really understands it. That is why Richard cares so much about politics – because he cares about his state. In 2018, he even produced the attack ad that was paid by an anti-Cruz PAC and it was directed against Ted Cruz, the U. S. senator for Texas.

Richard’s wife name is Christina Harrison. It is unknown when exactly these two got married, but they have been dating since the 1990s. In 1994, their daughter, Lorelei Grace Linklater, was born. By the way, she follows in her father’s footsteps: she is also occupied in the cinematography; Lorelei is an actress who has appeared in Linklater’s movies Waking Life (2001) and Boyhood (2014). The second one has brought the young actress a lot of success and popularity.

At present, Richar's networth is estimated at $12 million.

Generally, Linklater has been nominated for 128 awards and has won 55 of them, including:

Besides, the director got his first nomination for the Academy Award for Best Director, received the Golden Globes, Critics' Choice Movie Awards, and BAFTAs for Best Director and Best Picture. Boyhood gained the most critical acclaim.