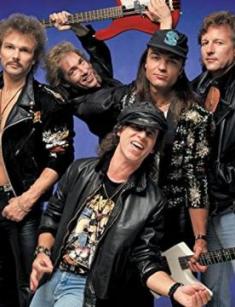 Scorpions is a band that blew the wind of change around the world. The Germans who sang lyrical rock ballads to the artificial bass reefs in English. In the early 1970s, they were skeptically written about by English rock lovers, and in 2017 Scorpions was included in the Hall Of Heavy Metal History and continues to collect stadiums.

The young German talented guitarist Rudolf Schenker founded his first band called Nameless in Hannover in 1965 and invited his younger brother Michael to join him. Soon the band was renamed Scorpions.

Schenker Jr. had a violent temper, but amazing musical talent, as did his older brother, who first picked up an acoustic guitar at the age of 5. Michael did not stay in Rudolf's band and soon joined Copernicus, where Klaus Meine was the lead singer.

The founder of Scorpions, understanding that he couldn't manage to work as a guitarist and vocalist on stage at the same time, started looking for a songwriter. In 1969, the older brother returned to Michael back to the band, and Klaus joined the band as well, becoming since then the author and performer of almost all the hits of the rock band.

The vocalist remembered that young musicians devoted all their efforts and resources to the development of the band and the struggle for a place on the musical Olympus. The money earned was spent on the group's needs until the last cent. Schenker even persuaded Maina to quit smoking to save more. For the first savings, the guys bought Merchess, on which they toured.

In 1972, the musicians first made a name for themselves on the hard rock scene with the debut album Lonesome Crow. Almost at the same time, the band's intense touring life began. The English press and music experts bayoneted the Germans singing in English, calling such an invasion of the international rock scene a blitzkrieg.

Although this attitude hurt the musicians, they did not stop striving for the goal and continued climbing the stairs to popularity. In 1973, Scorpions were accompanied on tour by their favorite London rockers UFO. Englishmen highly appreciated Michael Schenker's skill and offered the guitarist to be a part of their band, to which he agreed.

Michael asked Uli Roth, who was playing in Dawn Road at the time, taking the vacant position. The joint performance was successful, and the musician was invited to Scorpions on a regular basis, but Roth refused. Then Rudolf himself joined Roth's team, dragging Klaus Meine into the band a little later.

As a result, the musicians decide to take the name Scorpions as already known to rock fans. In the new line-up, the band recorded the next album Fly to the Rainbow. In the same year, Rudy Lenners became the band's new drummer instead of Jürgen Rosenthal, who left the band.

The popularity of Scorpions in Europe and Asia grew exponentially. The musicians recorded two more albums and spent all their time on tour, increasing the number of concerts played. The USA remained an unrealized dream country.

In 1977, the younger brother called Schenker from the United States, saying that he was watching the famous American band Van Halen performing Scorpions at a concert. When Michael asked why his brother and his colleagues were still not in America, Rudolf replied that they were leaving immediately.

By that time, the rockers had recorded Taken by Force and replaced the drummer with Herman Rarebell. After the concert tour in support of the record, Uli Roth left the band because of creative disagreements and the desire to play a different style of music. In 1978, Matthias Jabs became the winner of the guitarist casting, but he was only able to start the band's work a year later. Michael Schenker, having quarreled with UFO, returned to Scorpions, recorded three songs with his brother and the team.

The musicians who interacted with Michael, who had an undeniable talent, noticed that it was challenging to work with the guitarist. In addition to his challenging nature, he was also known for his alcohol and drug problems. Schenker often brought himself to an unconscious state. In Scorpions, the fickle guitarist did not stay long, having founded his own rock band. Since 1979, Matthias Jabs has been the band's permanent solo guitarist.

In the '80s, the group had a stunning and long-awaited global success. Finally, the unattainable, but desirable America has also conquered. 1980-1981 years, according to the memories of the musicians, resembled an endless party with concerts, fans, and recordings of new songs. It is noteworthy that the rockers managed to get past the problems with drugs, which suffered most of the stars of that time. However, the musicians couldn't avoid some offense from their colleagues on stage.

So, in 1983, the same Americans Van Halen, acting as a leader at the festival in California, forbade Scorpions playing in front of them to use light effects on the stage. The Germans brilliantly got out of the situation and hired five fighter jets flying over the audience. At the end of the '80s, the rockers gained popularity in the world and got a chance to take a break and have a short rest. And already in 1989, the Germans took part in the Moscow International Peace Festival, being one of the few western stars to have visited the Soviet Union.

In 1992 a new bass player Ralph Riekermann appeared in the line-up, and in 1996, drummer James Kottak joined the band. At the end of the '90s, the band caught up with the creative crisis, which led the Germans to record an experimental album for their music that was passed unnoticed in Europe and America. According to the group's leaders, the band was exhausted after decades of success and was on the verge of collapse.

The album surprisingly succeeds in Asia, the band went on another world tour, and received an invitation from the king of pop music, Michael Jackson, to participate in a charity concert in Munich. In 2004 the band again renewed the line-up and invited Paweł Mąciwoda to join the band.

The Germans repeatedly go on tours to Russia and the CIS countries in the new millennium, without stopping their concert activities in Europe and America. In 2006, Scorpions performed at the Wacken Open Air festival in honor of the 41st anniversary of their band. The concert was also attended by former musicians of the legendary band's golden compositions. In 2012, the German rockers assured their fans that they were not going to leave the stage, but only planning to cut their touring activities. According to the musicians, they saw interest in their own creativity, including from young people, which gave them an incredible impetus and inspiration. In 2016, James Kottak left the band. Motorhead drummer Mikkey Dee took his place.

From the very beginning, the band's founders staked on the international stage, not wishing to limit themselves to German experimental rock music, which was mainly played by the bands in Germany in the early '70s. The first album defined the musical genre of the band, characterized by virtuoso guitar losses and lyrical vocals.

Rock ballads became the hallmark of the band that brought love to the fans. The album Lovedrive became a breakthrough of German hard rockers and brought them worldwide fame. Thanks to the album, Scorpions was also known in America.

In 1980, the lead singer and songwriter Klaus Meine faced vocal cord inflammation. The voice of the Scorpions risked disappearing. The musician underwent two surgeries, and after the recovery period, Meine's vocals have suddenly improved, and the range of sounds widened. The band's albums are at the top of charts and the world's press list.

After performing in the USSR, the rockers who were inspired by the concert and the country recorded Wind of Change, which became the anthem of Perestroika. The video, which was filmed for the song, also reminds us of the upcoming changes not only in a particular country but also in the world, including the fall of the Berlin Wall. "The Wind of Change" is part of Crazy World, the most successful album in the band's history.

In the new millennium, the legendary Germans with their inexhaustible ideas managed to cooperate with the Berlin Philharmonic Orchestra and recorded a joint album. Scorpions now Despite the age of the musicians, the band continues to delight fans with new concerts, which are amazing, spectacular and energetic.

In 2017, the team was included in the Hall Of Heavy Metal History. The participants from the current and previous line-ups were recognized as the best in their genre.

In 2018, the group didn't intend to slow down and was working on re-recording old compositions and regularly went on tours around the world. Klaus Meine hinted in May 2019 that "there might be a new album out in 2020."