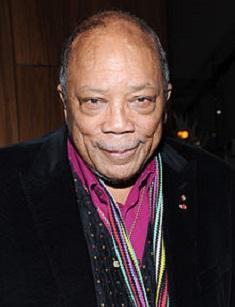 Born 1933, Quincy Jones is an American record and film producer, musician and composer, as well as the most Grammy-nominated musician in history and the second-highest Grammy winner of all time, with 80 nominations and 27 wins since 1961. He also won a Grammy Legend Award in 1992 and was named by Time Magazine as one of the most influential jazz musicians of 20th century.

His successful career lasts over seven decades and spans across many fields. According to his official website, he is a composer, artist, arranger, conductor, instrumentalist, record company executive, magazine founder, multi-media entrepreneur, humanitarian, investor; and record, film, and TV producer. He has been inspired by pop, soul, hip-hop, jazz, classical, African and Brazilian music, bringing it all into his own, original fusions.

He was born on the Southside of Chicago, where his family had moved as a part of the Great Migration (a massive migration of African Americans out of the Southern States to the urbanized North and West between 1916 and 1970). Quincy admitted that when he was a boy he used to dream about being a gangster. In that environment, violence was a norm. He later explained that:

‘’You wanna be what you see and that’s all what we ever saw’’.

Luckily, Quincy was introduced to music during his early years thanks to his mother who would sing religious songs and a neighbor who would play piano next door. However, his mother soon suffered from schizophrenic breakdown and his father divorced her, remarried and moved to Seattle with the entire family shortly after the II World War. In Seattle, Quincy attended Garfield High School when he would further learn playing trumpet and music arrangement.

He was informally tutored by a famous trumpeter Clark Terry (they also played together in 1960). At the age of 14, Quincy played with a National Reserve band together with his classmate Charles Taylor. He would also work in night clubs. Quincy later admitted that it was easier to start his career in a smaller city where the competition was not that strong.

At 14, he also met Ray Charles for the very first time, who was 16 years old back then and blind. However, it did not stop him from pursuing his dreams what made him a great inspiration for the young Quincy. Charles interested him in music arranging. Quincy later continued his education at the prestigious Schillinger House (now Berklee College of Music) in Boston.

However, he left the school for a music tour with Lionel Hampton, where he was offered a role of the trumpeter, pianist and arranger at only 20 years old. He would further his music education not earlier than in 1957. He travelled with Lionel Hampton to Europe and claimed that the European experience changed his views on racism in the US.

After having learnt the history of conflicts between various European and Asian nations, he started to understand them as a basic part of human nature and not unique to anyone, what helped him to ‘’open his mind and soul’’.

He would later settle in New York and work as a freelance arranger on various jazz sessions. He played the second trumpet in the studio band that supported Elvis Presley and served as a musical director for Dizzy Gillespie’s overseas big-band tour in 1956 in the Middle East and South America. He signed a contract with ABC-Paramount and started recording as a leader of his band and also worked with Louis Armstrong, Count Basie, Sarah Vaughan and Ray Charles.

Despite his many successful arrangements, his advancing career would often be challenged by racial prejudices. In 1957, he decided to go to study in Paris instead together with a famous French composer Nadia Boulanger.

He later admitted that Paris made him feel free as a musician and a black man. He also took a job with Barclay Disques, Mercury’s French distributor, and recorded many European and American artists, to sustain his studies. In 1960, he formed a big band called ‘’The Jones Brothers’’ with eighteen musicians, but their tour around North America and Europe became an economic disaster due to the size of the band.

Consequently, Quincy decided to record pop music in order to get out of his debt, however, it resulted harder to do as he initially had thought. He learnt to apply a very strict approach towards finding new songs, listening to hundreds of demos in order to find few perfect ones. The entire business, he would later say, is about creating a great song.

The head of Mercury helped Quincy with a personal loan and gave him a musical director’s job in the company’s New York division. In 1961, he was promoted to vice-president of Mercury, becoming the first African American on a high-level position in a recording company.

The 60’s and early 70’s was the period when his career kickstarted significantly. He decided to try his hand at film music, composing soundtrack for The Pawnbroker in 1963. In the same year, he also won his first Grammy Award for the best instrumental arrangement of a song by Count Basie I can’t stop loving you.

In overall, he created around 50 major motion picture and television scores throughout his career, including The Deadly Affair, In Cold Blood, Cactus Flower, The Bill Cosby Show, In the Heat of the Night or Ironside, which theme was the first synthesizer-based pop song. He also produced all four million-selling singles for Leslie Gore, including the famous It’s My Party and You Don’t Own Me, which were the US No. 1 and No.2 songs for several weeks in 1964.

He worked as an arranger for Dinah Washington, Billie Holliday, Ella Fitzgerald, Sara Vaughan and Frank Sinatra and also worked with Basie on Sinatra’s famous Fly me to the moon, which was a first recording played on the moon by astronaut Buzz Aldrin, after he landed there in 1969.

His partnership with Sinatra was one of the most fruitful ones. Quincy would recall how, when they arrived together with the entire band to Las Vegas, Sinatra had to hire him as his personal bodyguard to let him in to racially segregated casinos. They worked together until Sinatra passed away in 1998.

In 1975, Quincy found Qwest Productions and arranged successful albums of Frank Sinatra and others. In 1978 he produced music for The Wizard of Oz, where he first worked with Michael Jackson. Jones met Michael for the first time when he watched the show of the Jackson 5 in Los Angeles, starring a 12 years old future pop superstar. However, The Wizard of Oz was the very first time when they worked together and Quincy saw him as a kindred spirit.

He recalled that Michael was so teachable and humble when he received criticism that he absolutely knew he wanted to work with him. As a very hard-working person, he would show up at five in the morning for a four-hour makeup, and would know everyone else’s songs, steps, lyrics and lines.

The two artists befriended each other and Jackson insisted that Quincy produced his album Of the Wall, despite the objections of Epic Records that Jones was ‘’too jazzy’’. In 1982, Quincy produced Jackson’s Thriller, the bestselling album in the history of the music industry, with over 100 million copies sold worldwide. In 2009, he said to be devastated by the Jackson’s premature death, who he regarded to be his little brother.

In 1985, Quincy also co-produced Spielberg’s The Color Purple, starring Whoopi Goldberg and Oprah Winfrey, which received 11 Oscar nominations. He, Thomas Newman and John Williams are the only composers to write scores for Spielberg’s theatrical films. In the same year, he recorded the famous song We are the world, written by Michael Jackson and Lionel Richie, to raise money for victims of famine in Ethiopia.

It can be said that Quincy pioneered the model of using celebrities to raise money and awareness for a cause. He is widely known for his charitable activities. He supported Martin Luther King in 60’s and is one of the founders of the Institute for Black American Music (IBAM).

He founded Quincy Jones Listen Up Foundation, aiming to reduce poverty and connect youths with education, technology, music and culture. It built over 100 homes in South Africa in 2001 and sponsors intercultural exchange between teenagers from Los Angeles and South Africa.

In 1980’s, when hip-hop became popular, Quincy, despite the rejection of hip-hop by the most artists of his generation, created in 1989 his own album Back on the Block, aiming to show the musical connections between rap and jazz. He brought legends like Ella Fitzgerald, Miles Davis, and Sara Vaughan together with Ice T, Big Daddy Kane and Melle Mel to create a fusion of jazz and hip-hop.

The record was named ‘’Album of the Year’’ at the 1990 Grammy Awards. In 1990 Quincy also founded Quincy Jones Entertainment and signed a contract with Warner Brothers and NBC Productions. He produced The Fresh Prince of Bel-Air (1990-96), which introduced Will Smith to the industry.

In 1993, together with David Salzman he produced the concert An American Reunion to celebrate the inauguration of Bill Clinton as the president of the United States.

In 2001 he published his autobiography and started the Quincy Jones Video Podcast in 2007, sharing his knowledge about the music industry. He says he likes contemporary artists like Bruno Mars, Drake or Kendrick Lamar, but admits he is no fan of Taylor Swift.

In September 2018, a documentary about his life Quincy, co-directed by his daughter Rashida Jones, was released on Netflix. Apart from numerous Grammy Awards and nominations, he has also won an Emmy Award, seven Oscar nominations, the Academy of Motion Picture Arts and Sciences’ Jean Hersholt Humanitarian Award, and a N.A.R.A.S.’ prestigious Trustees’ Award.

In 1990, France recognized Quincy with its most distinguished title, the Commandeur de Legion d’Honneur; he is also the recipient of the French Ministry of Culture’s Distinguished Arts and Letters Award, and has gained honorary doctorates from several American universities. He also met with Pope John Paul II in 1999 as a part of the Jubilee 2000 delegation to end third world debt. Quincy Jones’ net worth is $400 million.

Jones has been married three times and has seven children with five different women. Among his children there is another music producer, two actresses (including Rashida Jones) and a fashion model. In 1974, he suffered a dangerous brain aneurysm that required two neurosurgeries.

He recovered, despite the facts that doctors gave him 10% chance of survival. However, that event what made him unable to play trumpet ever again. He also stopped drinking alcohol because of a recent stroke.