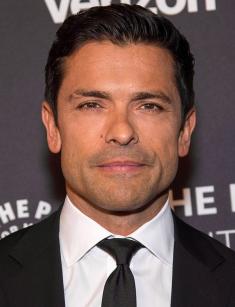 The American actor Mark Consuelos became famous after his filming in a serial melodrama All My Children, after which he began to receive offers from other directors. Today, there are more than a dozen films in the filmography of the man; he continues to act in films and plays a variety of characters.

The biography of the future artist began in the Spanish city, Zaragoza, where he was born in late March 1971. His father is Mexican and his mother Italian. In addition to him, parents raised two children, the older brother and sister. The boy spent his childhood in constant moving from Italy to the USA and back. He lived in Lebanon, Illinois and Tampa, Florida in America, he finished school in the same state but in the city of Valrico.

After receiving a school certificate, the young man decides to continue his education and enters the University of Notre Dame but soon transferred to the University of South Florida. Whatever it was, he did not manage to work in the field of marketing (he had this specialty at the University). When it came time to study the market in its different directions, the guy starred in films successfully and he was not even going to work by his profession.

The first role in which Mark appeared on television, immediately brought him success. The actor appeared in the image of Mateo Santos in the series All My Children in 1995 and starred there for 15 years. Although it was a minor role, Consuelos appeared in the shot in 104 episodes. He received significant film awards, including the Soap Opera Digest Awards, the ALMA and the Emmy. As a result, the project became the largest in the artist's career.

While working in the film All My Children, Mark begins to appear in other series. His filmography includes the series Friends, Law & Order: Special Victims Unit, Third Watch and Law & Order: Criminal Intent. In his youth, the actor did not give up even small roles because he hoped that he would be noticed and invited to the star in more significant roles.

In 2002, Consuelos was invited to star in the film Pride & Loyalty, where he worked with Charles Durning, Rebecca Budig, Gina Tognoni. He got one of the main roles. He appeared in the image of a police Bill.

Then the man appears in several TV series and gets a job in the military action film The Great Raid directed by John Dahl in 2005. The plot of the film takes the audience in 1945 and tells about Colonel Henry from the American army, who is entrusted with a critical mission. He must go to the Philippines and save the imprisoned in the death camp of American soldiers.

In 2006, the man played several roles in films and also appeared in the comedy Wedding Daze of Michael Ian Black, which tells about a young man, who cannot arrange his personal life. After the parting with his ex-girlfriend, he falls into melancholy for a whole year and only a close friend tries to help him come to himself. He offers a friend to marry the first counter as a way out of the situation. And he uses this advice, proposing to an unfamiliar waitress in the restaurant.

After that, Consuelos worked in the films Killer Hair and Husband for Hire and starred in the series The Protector in 2011. In the period from 2012 to 2013, he appeared in 5 episodes of the series American Horror Story: Asylum in the role of the guy Spivey. It is a serial horror film, consisting of several seasons.

In the first season, the life of a family that lives in an old mansion, former residents were killed in this house and their souls could not find peace after death. In the second season, the events unfold around the girl – journalist, who came to the mental hospital to shoot a special report about the bloodthirsty maniac. The second season tells the story of witches, who learn and live in an elite boarding house under the guise of gifted girls.

Later, a few small series appear in the career of Consuelos and the guy played in the crime thriller A Walk Among the Tombstones of Scott Frank's in 2014. After two years, Mark is invited to the role of Vic in the drama All We Had directed by Katie Holmes.

It tells the story of a girl and a mother, who live on the edge of poverty, although a woman works hard at two jobs. Rita tries to find a boyfriend, who would take her with the child to solve this problem when she and her daughter are deprived of the house. They stop in a small town on the way to another city, where they have luck.

In 2017, the audience appreciated the work of Consuelos in the series The Night Shift in the role of Dr. Cain Diaz. And later he began to appear in another project.

Mark met with his future wife, actress Kelly Ripa on the set of All My Children. They worked on one site until 2002, then the actress decided to leave the series, as she started working in another project.

Young people hid their relationships from all for a long time and they married secretly in Las Vegas in 1996. The closest people of the actors knew about it.

Although it is often said that two creative people do not get along well under one roof, these artists have a successful personal life. The couple has three kids, two sons and a daughter.

Now, Mark starres in the American TV series Riverdale together with K.J. Apa, Camila Mendes, Lili Reinhart in the main roles. He plays Hiram Lodge. A few episodes came out on the screens with the participation of Consuelos. Fans of the guy hope that they will see their favorite actor much more often than before in 2019. Mark Consuelos has a net worth of 40 million dollars.

Mark supports communication with his subscribers through the social network "Instagram," however, the man often puts a photo from the shooting there, rather than personal shots with his family and children. However, the page has a lot of pictures with his wife; they often appear together on television, show their subscribers pictures from a joint holiday.

The sports figure of the actor is well visible in such photos. Despite the tight schedule, he manages to keep his figure, although his weight is unknown, he looks quite pumped with the growth of 5,7 feet (175 cm).

At present, Mark Consuelos has a net worth of $40 million dollars.