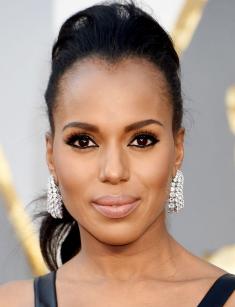 Kerry Washington is known as a profound drama actress in Hollywood. Indeed, she rarely appears in top-grossing blockbusters or romantic comedies: her talent manifests itself in dramas, biopics, and thrillers. Kerry earned her popularity after the lead role in the movie Ray, the biographical picture about the outstanding musician Ray Charles; the splendid performance brought her many prestigious prizes.

Kerry Washington was born on January 31, 1977, in the Bronx, New York, US. The girl’s father, Earl Washington, worked as a real estate agent; the mother, Valerie, was a college professor. She is not related to the famous actor Denzel Washington.

The parents paid much attention to their daughter’s upbringing and personal development. For instance, they took the 13-year-old girl to the stadium where Nelson Mandela, who had just been released, delivered his speech. When the family gathered together at Kerry’s 18th birthday dinner, they talked about a candidate the young lady was going to vote for during the next elections.

The future actress went to the Spence School, the elite girls’ school in Manhattan. She gained her first acting experience there and participated in school concerts and performances.

Kerry was an energetic teenager: she swam, participated in the activities against the spread of HIV/AIDS, and played in short sketches for children that explained how important it was to be aware of the horrible disease.

“I didn’t grow up thinking I was pretty; there was always a prettier girl than me. So, I learned to be smart and tried to be funny and develop the inside of me, because I felt like that’s what I had”, the artist confessed in one of her interviews.

The young woman considered careers in teaching and psychology but finally decided to enroll at George Washington University to study acting.

At the age of 21, Kerry graduated from the university. She received the first significant role in the movie Save the Last Dance at 24. It is the story about the interracial romance between a white girl and a black guy. Kerry personified Chenille, the main character’s friend; Julia Stiles played the lead part. The project grossed more than $131 million, and the artist won Teen Choice Awards.

Since that time, the actress has been showered with new offers. In 2002, she participated in the movie Bad Company with Anthony Hopkins and Chris Rock. However, critics were not much enthusiastic about it; the project failed.

In 2003, Kerry played in the crime drama The United States of Leland. This psychological drama reveals the reasons that can make a teenager commit a brutal murder. The script was exciting, and the woman accepted the offer gladly, yet the movie failed again. However, both critics and the audience emphasized Washington’s acting. The movie The Human Stain brought an episodic role and also failed.

Bad luck seemed to be everywhere. The actress wanted to take her mind off sad thoughts and became a social and political activist. She contributed to the work of The President's Committee on the Arts and the Humanities during Barack Obama’s presidency and delivered many lectures all over the country. Besides, Kerry took some TV projects and appeared in the series Boston Legal and Law & Order.

In 2004, the director Taylor Hackford invited the actress to his new movie, the biopic about the legendary pianist and musician Ray Charles. Jamie Foxx personified the jazzman while Washington played his beloved one, Della Bea Robinson.

The movie was a tremendous success and won six Academy Awards as well as other prizes. Kerry got the NAACP Image Award for Outstanding Actress in a Motion Picture.

The next wave of popularity came with the movie Fantastic Four (205), the screen adaptation of the comics under the same title. Kerry took the role of Alicia Masters. The director changed the initial character, the blue-eyed blonde, for the actress. The same year, Washington appeared in an episode of the action movie Mr. & Mrs. Smith; Brad Pitt and Angelina Jolie started their romance at the movie set of this project.

Soon, Kerry’s popularity increased so much that about three movies were released every year. 2006 brought the comedy Little Man, the thriller The Dead Girl, and the historical drama The Last King of Scotland where Washington played the wife of the Ugandan dictator Idi Amin.

In 2011, the director and producer Shonda Rhimes was looking for an actress for the role of Olivia Pope in the TV series Scandal. Dozens of black artists auditioned for this part, yet it was Kerry who impressed Rhimes: intelligent, charming, and, most importantly, politically sophisticated. Thus, the woman collaborated with Tony Goldwyn and turned into the star of the series. She became the first African-American woman to play the lead role on American television.

Eight years after the success in Ray, Kerry participated in another Academy-Award winner project, Quentin Tarantino’s western Django Unchained (2012). She personified the slave Broomhilda who was separated from her husband, Django, by slave-traders. The lovers have to face many ordeals before they reunite.

Critics welcomed the movie. It gained five Academy Awards and other 15 prizes including the Golden Globe and BAFTA. The lead actors, Kerry Washington and Jamie Foxx, reached the new level of glory and acting.

The more successful the actress got, the more interest in her personal life people took.

The press reported about only one romance with the actor David Moscow. In 2013, the woman married the football player Nnamdi Asomugha who was four years younger than Kerry.

The couple has two kids. In April 2014, Washington gave birth to the first baby, the daughter Isabelle Amarachi. In October 2016, the son Caleb Kelechi was born.

Although the actress was pregnant twice, her body is perfect. One can see her pictures in a swimsuit in many fashion magazines; there are no nude pictures, though. Kerry likes to practice yoga in her free time: she indulged in this hobby when she traveled to India, before the beginning of her acting career.

Apart from her acting career and social activism, Kerry became the spokesperson for L'Oreal along with Scarlett Johansson and Eva Longoria.

The artist has an Instagram and often posts bright moments of her life. Besides, she has a Twitter page.

In April 2018, the seventh season of the series Scandal finished. The same year, the artist appeared in two episodes of the series How to Get Away with Murder.