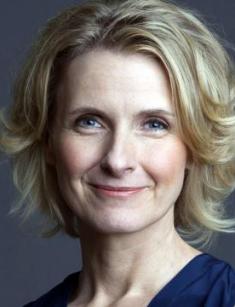 Elizabeth Gilbert is an American writer and the creator of the bestsellers Eat, Pray, Love and Big Magic.

Elizabeth was born on July 18, 1969, in Waterbury, Connecticut, into the family of a chemical engineer and a nurse. The girl had a sister Catherine who studied History and also became a writer.

The family lived like hermits: they had no neighbors. The father turned the near-by field into the place to grow Christmas trees. There were no gadgets in the house, including TV sets and tape recorders. However, Elizabeth had enough entertainment: the family liked to create short stories and plays. There is little wonder that the girls, who grew up in this atmosphere, devoted their lives to literature.

The young woman studied politics at New York University but failed to practice her profession. She did not want to live off her parents and worked part-time as a waitress, cook, and, later, journalist. This experience proved to be valuable when the writer created her bestsellers: for example, she talked about cooking in her short stories.

Elizabeth’s first works were published in 1993. The short story “Pilgrims” appeared in Esquire. The audience was surprised to see the beginner in the magazine that had never published unknown writers’ texts before.

Thanks to this start, many publishing houses invited Elizabeth to work as a journalist: SPIN, GQ, The New York Times Magazine, Allure, Real Simple, Travel + Leisure. Little by little, the woman earned more money and could relax: she did not have to be a waitress to earn her living in expensive New York.

Seven years after the first book release, the movie Coyote Ugly about the life of the saloon came out. The story is based on the articles that Gilbert had published in GQ; she described her personal experience of working in a New York bar.

In 1998, GQ published the article about the naturalist Eustace Robinson Conway; she asked the magazine to adapt it to the screen, and the movie The Last American Man appeared.

The journalist not only wrote stories for magazines but also created books. In 1997, her short story collection Pilgrims was presented; it brought her recognition and the Pushcart Prize; besides, Elizabeth was nominated for the PEN/Hemingway Award.

It took the writer three years to present the new novel, Stern Men; it became the bestseller of the year, according to The New York Times.

No sooner than 2002 the National Book Award experts saw the woman’s talent in the article about Conway; she was nominated for the prize but did not receive it.

All these works did not give the writer international fame. Eat, Pray, Love changed everything. This book portrayed Elizabeth herself: the woman who divorced and went to a spiritual journey looking for the meaning of her life and herself. She chose fascinating places: Italy, India, and Indonesia. The book describes some events that happened to Gilbert; she did not conceal any emotions from her readers and made her text a part of her actual life. Elizabeth shows that people who have everything may be unhappy, but it should not be so. Every woman has the right to be happy; perhaps, it will take a journey across the ocean and a thousand kilometers.

In February 2010, the woman presented the next book, Committed: A Skeptic Makes Peace with Marriage. According to the journalist, it was the sequel of bestselling Eat, Pray, Love. It demonstrated why Elizabeth decided to marry Jose Nunes (Felipe in the story). As Gilbert mentioned in her interviews, she tried to study marriage as a social institution, look at the married life from the scientific point of view, and comprehend why women did not want to have their relationships registered officially.

Three years later, the writer’s new book, The Signature of All Things, came out. In 2015, Big Magic: Creative Living Beyond Fear was released. Once again, Elizabeth promoted the idea that a person could do anything in their life: there is something previous inside them. Nature gives it to people, and self-improvement is people’s primary task.

One can see the details of Elizabeth’s personal life in her stories: she has never made them secret. Michael Cooper was the woman’s first husband; they met at the Coyote Ugly Saloon that appeared in the writer’s book later.

At some point, Gilbert realized she could not live her life the way it was; she left everything and started a big journey. She met Jose Nunes in India; they married in 2007, moved to New Jersey, and opened a store with Asian goods. Eight years later, the spouses sold the business.

In 2016, Elizabeth and Jose divorced because of the writer’s friend, Rayya Elias. They knew each other for a long time; Rayya was supporting Gilbert as she was developing as a journalist and writer.

One day, Elizabeth realized that their relationship was more than friendship; she found romantic feelings toward her friend when Elias was diagnosed with severe disease. The writer wanted to spend time with her lover without keeping it secret from her relatives and fans. Rayya Elias passed away in January 2018.

In 2019, the writer presented her new book, the novel City of Girls.

Fans can follow their favorite on social networks: the woman shares pictures and personal thoughts there.