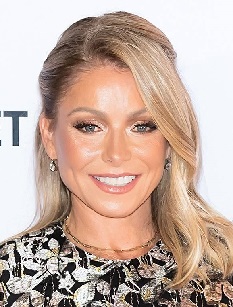 Nowadays Kelly Maria Ripa is a successful American TV host and producer, also well known for her actress career. She is the native of Berlin, New Jersey, small town, which population is about 7,000 people. She was born there in 1970. Kelly was recognized as one of the most powerful people in media in 2014.

She is the winner of a lot of different awards. Kelly has three children and is married to Mark Andrew Consuelos. They have their own production company. Kelly’s annual salary is $22 million, and her net worth is $120 million. Her salary per show is not known precisely.

The family of Joseph and Esther Ripa, little New Jersey’s family, became larger on October 2, 1970. That day Kelly Maria Ripa drew the first breath. She was born in a family of a bus driver, a labor union president, and a housewife. From an early age, Kelly was unlike other members of her family. She was the first who became interested in acting. At the age of three, she started doing ballet, playing the piano, and singing a little. At the same period, Kelly’s sister Linda was born. They had Irish and Italian origin and were brought up as Roman Catholics.

Kelly studied at High school of her native state in Voorhees Township. Its name was Eastern Regional High School. During studying, she was a cheerleader. Kelly’s drama teacher became a good friend to her. He advised her to become an actress, and nowadays, she is very grateful to him.

Kelly started to take parts in local theatre’s performances and showed outstanding abilities, playing in the Ugly Duckling. It was her senior year. After high school graduation, she entered Blackwood’s Camden Country College (CCC). Later Ripa decided to move to New York City to become a professional actress, that’s why she didn’t finish studying in college.

As a teenager, Kelly participated in some local TV shows. However, her first appearance on national television succeeded in 1986. She was a dancer on teen pop TV show Dancin’ On Air. Later Kelly became a regular dancer on Dance Party USA. In 1990 she got her first major acting role, which gave her wide fame. She played Hayley Vaughan on All My Children. Kelly was the part of this soap opera for twelve years.

On February 5, 2001 Kelly Ripa officially became the co-host of Live with Regis and Kelly. Regis Philbin couldn’t hide the enthusiasm about the appointment of Kelly for this role. Since her first appearance, the show began a new life. Ripa coped with her work so easily and resourcefully that it seemed she was born to become the host of Live! Philbin and Ripa made a strong alliance; their communication’s way helped to increase the rating of the show and number of audience. They worked together for ten years, and in January 2011, Philbin announced his retirement. Their last episode was on November 18, 2011. It was very touching, full of memories and fun moments.

Ripa became the head of the show, called Life with Kelly. She was looking for a replacement for Philbin, and the new show appeared on TV on September 4, 2012. Michael Strahan became the co-host of Kelly Ripa, and their program got the title of Live with Kelly and Michael. In 2016 the story of the show’s renaming repeated, because of Strahan’s retire. And on May 2, 2017, Live with Kelly and Ryan premiered. Ryan Seacrest got the position of Ripa’s co-host. Nowadays Kelly continued to be the head of this show.

At the same time, Ripa appeared in some sitcoms and movies, playing small roles or cameos. She also was the producer of TV shows and voiced some movie roles. In 2018 she took on the voice-over role of Whitney in ABC’s American Housewife.

There is no doubt that Kelly Ripa is a versatile person. For example, last year she was singing on American Idol. In a hilarious clip from Live with Kelly and Ryan, Ripa boasted about her “voice of an angel”, so Ryan Seacrest ran the potential for an audition by American Idol judges Lionel Richie, Katy Perry and Luke Bryan. Then Ripa walked into her audition and asked music icon, Richie, to hold the lyrics to her audition song, Peggy Lee’s “Why Don’t You Do Right?” After her performance, judges called her performance “interesting”, and “unique”, and handed her an expired ticket to Hollywood.

Kelly Ripa is the mother of three children. She married her shooting partner Mark Consuelos, Spanish-born American actor, in 1996. They both starred in All My Children. One year later, after their marriage, their first son Michael Joseph was born. In 2001 they became the parents twice. Lola Grace was born.

And in 2003 Kelly gave birth to a child, named Joaquin Antonio. All the family lived in SoHo, Manhattan until 2015. Then they sold their housing on Crosby Street for $20 million and moved on East 76th Street, where they bought a townhouse in 2013. It was the second expensive townhouse sold in New York City in 2013. The recent owners sold it for $27 million.

In 2019 a lot of various events have already happened in a couple’s life. In February they shook the red carpet of 91st Annual Academy Awards. The Ripa’s Oscar show dress was so beautiful that it claimed to be the best dress of the evening. Unfortunately, soon in March, the close friend of Kelly and Mark, Luke Perry, died. The pair was grieved for loss a lot. Kelly even got paid an emotional tribute to him on the episode of her show.

Ripa and Consuelos founded their own production company, called Milojo, in 2007. This title is the abbreviation of their children’s names. The company is engaged in the creation of documentaries, short movies, which are popular at movie festivals. Milojo was connected to Discovery.

Kelly also is an ambassador of several brands. In the past, she worked with 7 Up, TD Bank, Tide, and Pantene. Nowadays, she works with Rykä and Electrolux. Recently Kelly told about her intense fitness routine. She is working out nearly every day to stay healthy. She was so inspired by fitness that she designed her wear line. Kelly also reported that TV show The Bachelorette, loved by a lot of fans, disgusted her. Also, she loves to play dress up on Halloween. She imitated Beyonce, Miley Cyrus, Donald Trump, Brad Pitt, Wonder Woman, and many others.

Some events of Kelly’s life have affected her a lot. In 1999, her sister Linda was almost killed by a drunk driver. This fact became a reason for Kelly’s participant in MADD (Mothers Against Drunk Driving). Also, according to Linda’s speech, she lost a close friend because of his ovarian cancer. Since then, Kelly, in cooperation with Electrolux, collected money for the Ovarian Cancer Research Fund (OCRF). She hosts different charity events. For example, thanks to her, there were raised over $3.5 million.

Once she won $250,000 for charity fond on Who Wants to Be a Millionaire?. All in all, Kelly supported twelve charitable organizations, including UNICEF, Breast Cancer Research Foundation, and St. Jude Children's Research Hospital.