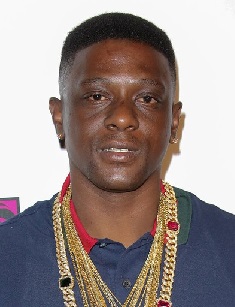 Torrence Hatch Jr., an American rapper, is famous under the pseudonym Boosie Badazz or simply Boosie (formerly Lil Boosie). The musician started his career in the 1990s and in several years got immense popularity due to popular hits, such as “Never Let Nobody”, “Savage Holidays”, “Trust Nobody”, and many others. Being a real gangster, he has already served 5 years in prison. Are you interested in his life now? Let's know more about Boosie Badazz!

Boosie was born on November 14, 1982, in Baton Rouge, Louisiana to Connie and Raymond Hatch. The boy lived in inadequate housing in South Baton Rouge. His mother was a school teacher. In his childhood, Badazz was interested in poetry and basketball. He played in the basketball high school team and got the title of the most improved player in 1997. When Boosie was 14, his father died of drug addiction. The tragedy influenced the future musician: then he turned his interest in lyrics into songwriting and started a rap career.

In the late 1990s, Boosie's cousin Young Dee, also a musician, introduced him to Baton Rouge rapper C-Loc who would later become his mentor. Other Boosie's mentors were Young Bleed and MD. In 1996 Baddaz joined the group Concentration Camp. Except for him, the youngest band's member, the group consisted of other musicians: Young Bleed, C-Loc, Happy Perez, Boo, Max Minelli, J-Von, Lee Tyme and Lucky Knuckles.

In 2000 Boosie did his debut work: he took part in the fifth C-Loc's album called "It's a Gamble" and in the third studio album of the Concentration Camp. Then the rapper sang under the former name Boosie. At the age of 17, the musician recorded the first album “Camp Life Entertainment.” Musicians Happy Perez, C-Loc, Max Minelli and Donkey helped Badazz with the album production.

In 2001 Boosie was included in the Trill Entertainment backed by its CEO the late Pimp C of UGK. Later, in 2002, he re-named himself and published a new album “For My Thugz.”

Subsequently, several representatives of the Universal Music Group paid attention to the young star. Badazz took part in the rapper's Trill Shit album “I Smoke, I Drinked”. The album also featured Young Bleed. On January 1, 2005, Boosie released the song “United We Stand, Divided We Fall” which was created in collaboration with the Lava House Records. He also published “Street Code” with Pat Lowrenzo. At the end of January, Boosie signed a contract with the Warner Bros. Records.

At the beginning of 2006, Boosie released his label debut album “Bad Azz.” The album included the song "Zoom" with Yung Joc. Later he published A Bad Azz DVD. There the musician told about his father's death due to drugs and his struggle against diabetes.

In December, DJ Drama (Gangsta Grillz), Webbie and Boosie released the joint single "Streetz Iz Mine." In 2007 Lil Boosie and Webbie took part in the remix "Wipe Me Down" by Foxx. Boosie himself released “Bad Azz Mixtapes Vol. 2.” The song was included in the Trill Entertainment compilation album “Survival of the Fittest.” Boosie's mixtape “Da Beginning” was published in 2008.

At the party in 2008, the rapper introduced his next mixtape “4th of July Bash.”

In March 2009, the singer released the mixtape “The Return Of Mr. Wipe Me Down” which was produced by The Runners and V-12. At his ordinary party on July 4, he introduced some songs of the mixtape again.

In general, 2009 played a remarkable and important role in Boosie's career. So, he released the next major album “Superbad: The Return of Boosie Bad Azz”. Its first single was "Better Believe It" where such rappers as Webbie and Young Jeezy starred. Badazz recorded the music videos for the songs "I'M A Dog" and "Loose as a Goose."

In 2010 Boosie and his former CEO C-loc released “Unbreakable” - the Compilation CD. This year he was accused of murder and conspiracy and was sentenced to the death penalty. However, the musician made plans for his future career. On September 28, the musician released the fourth studio album “Incarcerated” on Asylum Records. The musicians Webbie, Foxx and Lil Trill took part in its recording. Later the rapper released the mixtape-album called “Gone Til' December.” It consisted of such singles as "Be Careful" featuring Money Bag$, "I Did You Wrong" feat. Lil Quick, "I Been Icy," "My Children," and "I Ain't Mad At Cha." Also, the rappers Lil Jas, Hatch Boy, Yung Giga of Bad Azz Entertainment appeared in the songs.

In his interview in 2014, Lil Boosie confessed that the prison sentence influenced well on the career. Sitting in prison, the rapper managed to create near 500 songs. According to his words, he improved his pitch and way of singing.

In 2013 the prisoner was allowed to use computers and hard drives. There was a lot of music which the musician had created before the sentence. Due to the allowance, Boosie's attorneys thought that Badazz would be released within the next half a year. It happened to be the truth.

After the rapper's reveal in 2014, he started working hard: he released a string of singles, such as “Show Da World" with Webbie. Lil Boosie was featured on "Wuda Cuda Shuda" by 2 Chainz, "Beat Up the Block" by Dorrough Music, "Face Down" by DJ Mustard, "Beez Like" by Young Jeezy, "Jet Fuel" by T.I., "Made Me" (Remix) by Snootie Wild,“BooPac”, “Set It Off”, “Mind of a Maniac”.

In October 2014, the rapper re-named himself: now his pseudonym is Boosie Badazz. In the interview he admitted that he became tired of being “Lil” - the prison made him grow up.

In April 2014 the rapper published his first post-prison mixtape called "Life After Deathrow" with Yo Gotti, Trey Songz, LIV and Shy Glizzy.

Bad Azz Entertainment, but they made a re-branding several years ago.

The rapper has a criminal background. So, in October 2008, the police found marijuana and a gun in his car and arrested him. One year later, on September 22, 2009, the rapper confessed that he had committed another crime linked to marijuana. The next day he got the sentence of 2 years in prison.

Judge James Moore found that Boosie had violated probation while awaiting sentencing and doubled the sentence on November 10.

On November 29, 2011, Boosie was sentenced to eight years in state prison after pleading guilty to the drug charges. On May 11, 2012, a jury found Boosie not guilty of first-degree murder.

On December 7, 2012, after it seemed Boosie was to remain in prison for seven more years due to drug charges, his attorneys were able to argue that the drug ring charge was a setup.

On April 8, 2019, Boosie was arrested in Newnan, Georgia and accused of possession with intent to distribute narcotics and gun possession.

The rapper prefers to keep his personal life in secret. Today the musician is thought to be single. However, some sources report that he has eight children. According to rumors, all the kids are from different women.

After his reveal from prison, in November 2014, the rapper shared in Social Media that he had kidney cancer. In December he underwent the successful surgery, and now his health is in no danger. His lousy experience Badazz expressed through the short gloomy album «In My Feelings (Goin’ Thru It)» released on December 31, 2014.

Continuing the record, in January the musician released the song “Out My Feelings (In My Past)”.

According to Boosie's admissions, when he got back home after prison, he started understanding music more profound. Now in the songs, he tells more about real situations – about things happening in life.One of the quotes from the speech he made in an interview:

I have about 500 songs at the moment. I feel that I'm making the best music I've ever made. The more I go through in life the better my music gets and it's been crazy the last three years. I keep my music heartfelt and stick to making real music. I wouldn't even say it's hip hop music. My music is 'reality rap'. Hip hop music can make you dance and bob your head, but it can't make you cry or touch your heart like reality rap.

Answering the question “If you were the president of the USA, what would you change?” he said that he would stop wasting money the way the governments of today do it. He would give money to the poor; he would help them. Secondly, he would cut taxes. The musician is angry about the fees: why should he share his money with the authorities?

At present, Boosie has a net worth of about $750 thousand.