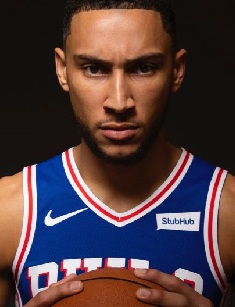 Benjamin David Simmons is a professional basketball player from Australia. Currently, he is playing for the American basketball team Philadelphia 76ers of the National Basketball Association (NBA) on the point guard position. His love for the sport was born in his infancy. Now the player is known for perfect skills which let him set high stats.

Simmons was born in the Melbourne suburb of Fitzroy, on July 20, 1996. He is of mixed-race: his father Dave Simmons was American, mother Julie is from Australia. Ben has five siblings. 4 of them, Melissa, Emily, Liam, and Sean, are his mother's children from the former marriage. Their age difference is 15 years: the eldest is Melissa, the youngest is Ben. Even though they were not relatives, the parents tried to bring all of them up with love and without discrimination.

Ben's dad, Dave Simmons, is a former basketball player for the Oklahoma City University team. Later, in 1989, he started performing for the Melbourne Tigers in Australia's National Basketball League.

When Ben was 18 months, the family moved to Newcastle. At the age of 7, he started playing basketball for the Newcastle Hunters. He spent there five years; later he became the player for the Lake Macquarie and Newcastle. Also, in his childhood, Simmons was keen on playing junior rugby. So, he was a precious player in the Newcastle Rugby League.

In 2006, 10-year Ben Simmons returned to Melbourne. He joined the Knox Raiders team. Besides, he was interested in Australian rules football, performing for the Beverley Hills Junior Football Club. Being a 7-grade student, Ben was named MVP.

As a teenager, Simmons had to choose which sport is better to dedicate himself to. He was looking for advice among his mates and even asked his football coacher for help. His words influenced on Simmons: eventually, he decided to focus on basketball, to train it harder, but sometimes helped his former football club. In his later admissions, the player would claim that football, in his opinion, is "an amazing game."

When he was 15 and studied in the 9th grade, he played basketball in the Box Hill Senior Secondary College team. In 2011 the player took part in the Australian Schools Championships with this club. In 2012 Ben Simmons was awarded by a significant scholarship at the Australian Institute of Sport in 2012. In the same year, Simmons attended the Pangos All-American Camp for basketball prospects. Later the considerable success fell on his head: at the age of 15, he was selected as a representative of Australia at the 2012 FIBA Under-17 World Championship. Despite his age, Ben showed a perfect playing and led the national team to several medals. One of the most astonishing his results at the Championship was the score in the game against the Czech Republic: he recorded 26 points, 10 rebounds and 5 steals.

In January 2013, at the age of 16, Simmons moved to the USA. He studied at the Montverde Academy in Montverde, Florida. There he joined the basketball team of the academy.

So, in April 2013, he helped the Montverde team defeat New Jersey's St Benedict's team in the High School National Tournament. This match made his team the champion.

In June 2013, the player took part in the Big V competition, playing for the Bulleen Boomers. While performing for the team, he scored 12,3 points, 8,5 rebounds, 2,5 assists, 1,3 steals and 2,3 blocks per game on average.

In the 2013-2014 season, Ben's average results were 18.5 points, 9.8 rebounds and 2.7 assists per game. In general, he scored 88 blocks. The Montverde team's best result of the season was the score 28-0 in the match against the Oak Hill Academy. Simmons made 24 points and 12 rebounds. As a result, he got the title of the America's top high school junior and was voted MVP at the National Basketball Players' Association Top 100 camp.

In 2015, Simmons took part in the 38th annual McDonald's All-American Game and was subsequently named the Morgan Wootten Award winner. Only the best, outstanding, skilled and talented male McDonald's All-American players get this title. On March 24, playing for the Eagles in the High School National Tournament, he made 28.0 points, 11.9 rebounds, 4.0 assists and 2.6 steals per game and managed to record 24 double-doubles.

Having entered the college, Simmons joined the LSU Tigers men's basketball team on a four-stop national tour in Australia. His debut performance was on August 15, in the match against the Newcastle All-Stars. Ben's double-double of 22 points and 10 rebounds led the team to the victory. By the way, his father played for the Newcastle All-Stars in the late 1990s. Tigers' best result they made during the tour was the score 3-2. In 5 games, Simmons himself averaged 20 points and 9 rebounds.

On November 13, 2015, Ben took part in the successful game with the McNeese State: so, he recorded a double-double of 11 points and 13 rebounds what helped his team defeat the opposers. In the next game (against the Marquette), on November 23, the sportsman made 21 points, 20 rebounds, 7 assists, and 2 steals. On December 2, playing against North Florida, he improved the results and got 43 points, 14 rebounds, 7 assists and 5 steals. His 43 points became the historical record for the Tigers. Before only Shaquille O'Neal made 43 points on December 28, 1991. On January 5, 2016, in the fight with Kentucky, Ben Simmons made 14 points and 10 rebounds.

The regular season Simmons where took part became a real disappointment: the record of LSU was only 18-13. Simmons played 33 games in the season. His average results were the highest among the mates: so, he recorded 19,2 points, 11,8 rebounds, 4,8 assists, 2,0 steals and 0,8 blocks per game (in 34,9 minutes)while shooting 56.0% from the field, 33.3% from 3-point range and 67.0% from the free throw line. In the SEC, he ranked fourth in points, first in rebounds, third in field goal percentage, fifth in assists, and second in steals.

On March 21, 2016, Ben dropped out of the college and announced the decision to apply for participation in the NBA draft. The sportsman moved to Phoenix, Arizona and signed a contract with American sports agency Klutch Sports owned by Rich Paul.

Before the NBA draft in 2016, the news in media questioned Bens's skills and attitude. Philadelphia 76ers head coach Brett Brown, former Australian national team coach and a friend of the Simmons family, repudiated the claims being made and was content with Simmons' pre-draft behavior. However, on June 23, Brown and the 76ers chose the player.

On September 30, 2016, the player got injured: he rolled his right ankle. Due to an X-ray and MRI, the doctors stated that he had suffered a fracture of the fifth metatarsal bone of his right foot. The poor sportsman had to miss 3-4 months of playing. His return date was declared to be in January. However, the injury turned out to be serious. In February 2017, the analysis showed that Ben still had problems with a knee. Because of it, on February 24, 2017, it was stated that Simmons would miss the whole 2016-2017 season.

Due to Ben's trauma, many experts hesitated over his strength and ability to play. However, having recovered, the sportsman showed all the haters who he is: in his debut NBA game, on October 18, 2017, he recorded 18 points and 10 rebounds. It was the fight against the Washington Wizards. On October 21, fighting with the Toronto Raptors, Simmons made 18 points, 10 rebounds and 8 assists and became the second player after Oscar Robertson to score 10+ scores, rebounds and 5+ assists.

On October 23, Simmons played the fourth game and made the first career triple-double of 21 points, 12 rebounds, and 10 assists. By the way, due to this match, he got the title of the third rookie to record triple-doubles in the first four games after Robertson (1960) and Art Williams (1967).

In general, Simmons started the season with 170 points, 100 rebounds and 80 assists in the first team games. On November 29, the player got 31 points and 18 rebounds in the winning match against the Washington Wizards. On February 22, he had 32 points which helped the 76ers defeat the Chicago Bulls.

The game against the New York Knicks on March 15 brought success to the player: Ben Simmons made the 8th his triple-double. Later, the NBA news reported that Simmons was the third rookie in the NBA history who has scored 1000 points, 500 rebounds, and 500 assists after Robertson and Magic Johnson.

On March 19, there was the fight with the Charlotte Hornets. Ben succeeded to record 11 points, 12 rebounds, and 5 assists. On March 24, playing against the Minnesota Timberwolves, he made the 10th triple-double of 15 scores, 12 rebounds and 13 assists.

On April 6, in the match with the Cleveland Cavaliers, the sportsman showed an astonishing result of 27 points, 15 rebounds, and 13 assists. On April 10, Simmons helped the 76ers set a record of the15th consecutive victory. Their season record was 52-30.

In his debut playoff game, in the match against the Miami Heat, Simmons recorded 17 points, 14 rebounds, and 10 assists what led the team to the victory. In Game 4, Simmons helped the 76ers take a 3–1 lead in the series with 17 points, 13 rebounds and 10 assists in a 106–102 win. He became the first rookie since Magic Johnson in 1980 to have a playoff triple-double, and became the fifth rookie with a triple-double in the playoffs, joining Johnson, Kareem Abdul-Jabbar, Jerry Lucas, and Tom Gola. Simmons helped the 76ers get to the second round of the playoffs with a 4–1 defeat of the Heat, as he recorded 14 points and 10 rebounds in a 104–91 win in Game 5.

In 2012, at the age of 15, Simmons was a representative of Austalia at the 2012 FIBA Under-17 World Championship. The talented teenager helped the team get to the final. Unfortunately, in the final match, the United States national team beat them.

In the next year, Simmons took part in the 2013 FIBA Oceania Championship, playing for Australia against New Zealand. Having scored 4 points in the two-game series, he gifted the team a gold medal.

In summer 2014, Simmons joined the Boomers extended squad for the 2014 FIBA Basketball World Cup. However, he did not perform there: the government of the club made a list of 12 people, Ben was not included.

In spring 2015, Ben announced his decision to perform for Australia at the 2016 Rio Olympics. His main aim was to get a medal. However, later he denied the words, having decided to focus on preparing for his rookie season in the NBA.

In October 2017, the sportsman said that he would represent Australia at the 2020 Summer Olympics in Tokyo.

Ben Simmons' personal life has always been the subject of people's discussion. Let's know more about his girlfriends!

Ben had a first serious relationship with Brittany Renner, an Instagram star with 1.5 million followers. The woman became famous due to the hot body, beautiful appearance and sexy photos. She has her own business: she sells hair products and has her clothing line. Besides, Brittany makes money on Instagram advertising.

Their love story ended in 2016 when Simmons became tired of her responsibility.

The next Ben's girlfriend's name was Dylan Gonzalez. She is also an Internet star. Interestingly, the woman has a twin sister Dakota. The couple started dating in summer, 2017. Some rumors said that they met each other in 2015 when Simmons dated Brittany Renner.

The reason for their break-up was not reported.

In 2018 Ben Simmons had a short relationship with Tinashe, an American actress.

Later the sportsman met his current girlfriend, Kendall Jenner, Kim Kardashian's sister. Their photos together have already appeared in magazines, their relationship was on every highlight. Their love seems to be serious: Jenner has acquainted Ben's mother, they spent New Year's Eve together. Maybe this year the world will see Jenner as Ben's wife?

Ben Simmons owns a vast amount of awards and nominations.

So, at the college, he was named a consensus first-team All-American and the USBWA National Freshman of the Year. Considered a five-star recruit by ESPN.com, Simmons was listed as the No. 1 power forward and the No. 1 player in the nation in 2015. In 2014 he was featured on the Blue Ribbon College Basketball Yearbook 35th anniversary cover, was named the SEC's Preseason Player of the Year, and earned Associated Press preseason All-America team honors.

In 2018 Simmons was named Rookie of the Year after a long competition with Donovan Mitchell.

What about Ben's net worth, it is estimated at $50 million at present.