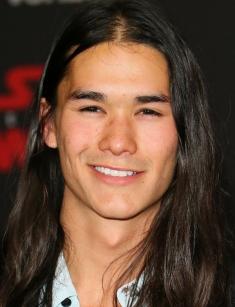 Booboo Stewart is one of the brightest and charismatic actors of the American cinema. He is talented in everything – in wrestling, where he showed good results, in music and acting profession. Stewart has a large army of fans, who monitors his work and each role becomes a confirmation of the status of a superstar.

Booboo was born on January 21, 1994 in California. His father Nils Allen Stewart is a professional actor. The couple has four children. In addition to Booboo, there are daughters: Fivel and Maegan, Sage. The boy's father is a professional stuntman. He was engaged in the acting profession after a career in wrestling. He plays in films, is engaged in producing. Booboo`s mother starred in film projects but she spends more time on her family.

The real name of the movie star is Nils Allen Stewart Jr. When people asked why his name is Booboo, the actor explains that the nickname was given when he was a child by his parents, so it has since taken root.

Looking at the appearance of Booboo, it is difficult to understand what nationality the actor. He has Scottish, Russian and Indian roots on his father's side. The mother also has a mixed origin, her ancestors were Japanese, Koreans and Chinese.

All the children of the Stewart family are known in show business. The eldest daughter and son are established actors. Booboo's younger sister takes her first steps in the acting profession. According to Stewart Jr., the father inspires and supports each of the children to try new things, to look for themselves. It is the main reason for the success of their family.

Booboo manages to study music and performs in the group TSC (The Stewart Clan) together with his sisters Fivel and Maegan. In 2006, he became a member of another musical group T-Squad. He participates in the recording of soundtracks for films, including with the participation of himself.

The first role in the biography of Stewart Jr. was in an episode of the series ER. In 2004, the young actor starred in the film Skeleton Man, where he plays the role of a child warrior. He starred in the movies Dante's Cove, Everybody Hates Chris, Good Luck Charlie. The participation in small roles in major projects affects the professional growth.

The turning point comes in 2010 when Booboo gets the role of the werewolf Seth Clearwater in the movie The Twilight Saga: Eclipse. The participation in the project brings Stewart the international recognition.

Fans of the vampire saga noted the unusual appearance and athletic character data (his height 5,6 feet (173 cm), weight 154 lbs (70 kg). In addition, the werewolf Seth had the special interest of the audience through friendship with the main character of the film, the vampire Edward Cullen.

During the final fight, he fights with vampires of other type Riley and Victoria, who want to destroy the family of Cullen and Bella. Seth can be immediately recognized by the color of the coat, his wolf has a sand color.

In this episode it is possible kill only one enemy - Riley and the threat for vampire family remains open. Seth goes along with the main saga werewolf Jacob from the wolf pack to continue accompanying and protection of the family Cullen.

After the successful role, Booboo Stewart starred in a number of films that strengthen his interest in the work of the actor. Among them the film X-Men: Days of Future Past, where the guy plays the role of James Proudstar.

In 2015, Booboo plays Jay in the musical fantasy Descendants. After a successful premiere and positive reviews of film critics in 2017, viewers receive a continuation of the film about the adventures of teenagers in Auradon. In 2019, the 3rd part of the fantastic musical with the participation of Stewart Jr. will be released.

Booboo was asked in an interview for the website WAMG (We Are Movie Geeks) in which franchise the actor wants to star.

"I would like to participate in the movie The Lord of the Rings. Even if I was just killed in the background, I don't care. I could be an elf," the star shared his creative dream.

Like most celebrities, Booboo Stewart's personal life is under the constant attention of the press and fans. There were rumors that in the period from 2010 to 2012, his girlfriend was a Canadian actress Jodelle Ferland. Then there was talk that the young actor was dating Samantha Boscarino.

It is known that Stewart has a strong relationship with his girlfriend, the American actress Meghan Trainor since 2014 (according to other information, from 2016). After the publication of joint photos on the official page of the girl on the social network Instagram there were rumors about the close relationship of artists.

The public received a confirmation when Trainor wrote that she will post joint photos with Booboo on a separate page on Instagram.

The actor has an opened official page on the "Instagram", where he puts photos from the filming and his drawings. In addition, the star of Twilight has a page on Twitter.

Booboo has many fans, who created numerous fan groups on Facebook.

The guy works hard and gives all the best on the set of movies. Stewart's efforts were not in vain. Now the star is on the list of the highest paid actors in the world, where he occupies a leading position. Booboo Stewart has a net worth of $4 million dollars.

The magazine "Glamour" recognized Stewart as the sexiest actor in 2019.

The singer continues to be involved in musical creativity. There was information that he would like to pay more attention to the work in the recording studio for the preparation of his album. The star plans a world tour.

The artist prefers to watch his favorite movies and play video games in his spare time. He likes his dog Labrador Spinee and he is upset when the animal is sick. The actor shares his worries on his personal Twitter page. He tries to be in the circle of his family and friends, as possible in the tight schedule of the star.