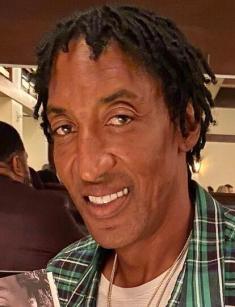 Scottie Pippen is an American basketball legend. He's an NBA star and he was instrumental in popularizing the association on a global level in the 1990s.

The future celebrity was born on September 25, 1965, in Hamburg, Arkansas, as Scotty. Later on, he switched to an alternative variant of his name's spelling.

He's the youngest of 11 siblings and the tallest of them.

His mom's name was Ethel and his dad's name was Preston. They have both passed away. Preston was a paper mill worker. He got paralyzed on his right side as a result of a stroke. He became unable to walk and could hardly speak. Because of the financial strain, the family couldn't provide a college education for all the kids.

Scottie used to play basketball in high school. He turned out to be a talented sportsman but he failed to get a college scholarship. Eventually, a coach from a university discovered him. Even then, Pippen stayed away from the media limelight. His career started in 1987 and embraced three decades. He played for five teams:

In total, Pippen spent around 12 years with the Bulls. After he retired, the team retired his no.33 jersey as well.

Scottie's all star card has become one of the most coveted collectibles among basketball fans.

This sportsman was appointed the face of the renowned Air shoes by Nike. Plus, he released his own shoes with his brand.

This celebrity became a member of the basketball team that represented the US at the Barcelona Olympics in 1992. Michael Jordan was there as well. They won the gold medal.

In 2010, the star became the Chicago Bulls' team ambassador. He retained this role for 10 years and left because they failed to agree on the financial remuneration.

In 1988, Scottie tied the knot with Karen McCollum, a musician. A few months earlier, she gave birth to the sportsman's first son, Antron. This marriage lasted for two years.

In 1997, Pippen went down the aisle with Larsa Marie Younan, a TV star. The couple welcomed four children: Sophia, Justin, Preston and Scottie Jr. Their eldest son, who was named after his father, followed in his steps and became a basketball player too. Their only daughter is a well-known dancer. Pippen spent nearly 25 years with his second wife. Now, he's single.

The star has two daughters, Sierra and Taylor, from ladies whom he has never officially married.

Scottie has appeared in various TV shows and also in cameo roles: