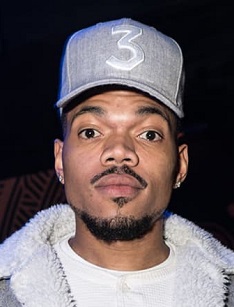 The native of Chicago, Chancelor Jonathan Bennett has become one of the biggest breakout stars of the past few years. He is known as Chance the Rapper. Achieved fame and success by avoiding the major labels that want to sign him; he released the first streaming-mixtape, which could win Grammy Awards.

Chance the Rapper makes outstanding music, pleasing both the backpacker fans and a much demanding audience through interesting collaborations with hip hop stars, for example, Kanye West and Lil Wayne. Also, he participates in political life and dedicates time to charity. Recently he donated $1 million to Chicago public schools. He has a daughter. The rapper’s net worth is roughly estimated at $9 million.

Chancelor is from Chicago, the state of Illinois. He came from a middle-class family. Lisa Bennett, his mother, gave birth to Chancelor on April 16, 1993. Then she assisted the state attorney general. His father, Ken Williams, also assisted politicians, especially senator Barack Obama. Young Chancelor often met the future president. He even told him about his dreams.

Chancelor’s grandmother brought him up as a Christian. However, later, he fell out of faith. In high school, Chancelor was an active member of JSU. He studied at the Jones College Prep High School. As a kid, Bennet started listening to Michael Jackson. It was his first music interest. Also, there was often playing jazz in the Chancelor’s home. That also influenced him to learn music deeper.

The final reason for Bennett’s wish to become a singer was Kanye West. Then-teenager listened to all singles and albums by Kanye, which he could find. Taylor, the younger brother of Chancelor, was also interested in rap. Both brothers tried to make their first songs.

Currently, Chancelor says that Kanye was their idol. The brothers were inspired by his music, and Chancelor even dropped out of college after a week to become a professional musician.

A turning point that made Chance’s drive and passion for music real was his ten-day suspension from high school. It was his senior year. Some of his teachers ridiculed his aspirations for music. So, he set off to make a mixtape as a course of action against the school’s administration. Initially, the project known as “10 Day” was a simple act of youthful rebellion. Later it became a rapidly growing movement and got wide recognition among thousands of followers.

Chance made his first waves on the Chicago music scene in early 2011 with the track and video for “Nostalgia” gaining him recognition on the Chicago hip-hop blog Fake Shore Drive. In 2013 Chance toured with Eminem, but he had not met him. He said that he appreciated Em’s contributions to music. Chance also appeared as an opener on Eminem’s “Rapture Tour” in February 2014.

In 2015 Chance made a cameo in Kelly’s “Backyard Party” video and collaborated with the singer on “Somewhere in Paradise”. However, in an interview that featured in Surviving R. Kelly, Chance said that in hindsight he regretted working with R Kelly.

In 2016 Chance released his mixtape “Coloring Book”. It achieved the mainstream success that year and was on a wildly successful streak. Chance even was a leader of the annual National Christmas Tree Lighting concert at White House on December 1. Chance the Rapper’s “Acid Rain” was even included in the president’s summer playlist.

In 2017 Chicago-born rapper scored big at the Grammys. He won his first ever Grammy Award for Best Rap Performance for the track “No Problem”. During the primetime ceremony, he also took the home the prestigious awards for Best New Artist and Best Rap Album.

In 2017, Chance was invited to Saturday Night Live as a guest host, where he sang his outstanding track “Come Back Barack”. Then he celebrated it until Sunday morning. Chance rolled into hip East Village bar Professor Thom’s for the “SNL” after party with an entourage of about 25 people. Witnesses said that Chance was drinking beer with his crew, but by 6 a.m., “security had to escort him out as the throngs of people became too much”.

Chance the Rapper was a leader of the concert at Ford Amphitheater at Coney Island Boardwalk in Brooklyn on September 29, 2018. In 2019 Chance The Rapper performed during the 2019 Coachella Valley Music And Arts Festival.

Chance the Rapper's sheer existence eschewed the norms of hip-hop and the music industry. He’s found success without the help of a record label, releasing his music directly to fans for free. But even with firsts within the industry aside, his performances were also entirely rare in his genre.

He's more of a frontman than an MC, moving with the ebbs and flows of the band. He improvises, performing tight arrangements of his songs that change from show-to-show. His music was estimated as uplifting and even versatile. His songs contain jazz melodies. They are often connected to the questions of his religion, faith, and childhood. Many of his songs he referred to Jesus.

Chance dedicate much time to his image. He looks incredible, breaking down all rules of fashion. He created some clothes for his concerts and Grammy ceremonies. Chance designed some suits for his daughter and girlfriend. The rapper even hit up Disneyland for an exclusive fashion event.

There was a marching band, characters on the loose and a full-on fashion show that featured Mickey-inspired clothing in celebration of the mouse's 90th birthday.

In 2013 Chance started dating Kirsten Corley. His girlfriend gave birth in 2015. They became parents of a daughter, named Kensli. Bennet showed their daughter only on December 31, 2016. The couple wanted to break up in 2016, and Kirsten went to court, demanding payment of alimony. The pair reconciled in July 2018 and Bennet began to live with his kid and wife again. In March 2019 Bennet and Corley tied the knot.

"I've been doing this for 20 years. All you have to do is really just smile, be relatively sexy, just read some numbers and you're good to go!"

And Chance definitely heeded that advice! He talked about Chicago's cold temps, cracked some jokes and even put on a "cloak of invisibility" that briefly blended him into the weather chromakey green screen. He did so good that WGN has already offered him a full-time job! Watch his forecast in the player above.

The same year Chance was asked if he would run for president ever. He revealed that he didn’t feel like he could do it.

Chance the Rapper didn’t release any studio album. He is the author of 18 singles and five mixtapes. Also, He made 11 music videos. His debut album is scheduled on July 2019.