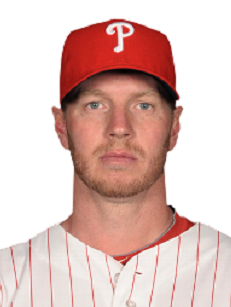 Roy Halladay was a famous American professional baseball player who got the nickname “Doc.” In the period between 1998 and 2013, Roy played for two teams: the Toronto Blue Jays and Philadelphia Phillies. He made a brilliant career in sports and has become very popular around the world. The athlete died when his plane crashed in 2017.

The future sports star was born in Denver, Colorado, the U.S. His father, Roy II, was a pilot for a food-processing company. His mother's name is Linda; she was a homemaker.

Halladay was known to be interested in baseball from childhood. He started to play baseball at a very early age. A 14-year-old boy attracted the attention of major league scouts. When Roy was 13 years old, he started training with Colorado baseball guru Bus Campbell. The trainer helped him a lot in becoming a professional baseball player.

Roy Halladay graduated from high school in 1995. Soon after that he was invited by the American League to play for the team Toronto Blue Jays after he decided to deny his college baseball commitment to Arizona. At the beginning of his career Halladay had some problems with pitch control, although he was called a hard thrower.

The sportsman became one of the most dominant pitchers in baseball playing for the team Philadelphia Phillies. The baseball player retired after finishing the season in 2013.

In 1996, Roy started to play in Toronto’s High Class A team with some of the most talented sportsmen, including Ryan Freel and Kelvim Escobar. Roy led all Blue Jays minor leaguers in wins with 15. He also got the title of the organization’s Minor League Player of the Year. In July, he was honored as the organization’s Pitcher of the Month and was named to the Florida State League All Star team. Roy successfully finished the season and was given a name of Toronto's top prospect by Baseball America.

In 1997, Roy rapidly earned a promotion to Triple A Syracuse. At the age of 20, the player became the youngest sportsman to play in the International League.

In 1998 the sportsman was sent back to Syracuse and made his major league debut in September.

At 21, Halladay was the third-youngest pitcher ever to start a game for the Blue Jays. Two weeks later, going against the Detroit Tigers, he took a no-hitter into the ninth inning.

In 1999, Roy spent his first full year in the big leagues.

The 2000 season appeared to be challenging for the player. He even wanted to think about retirement. Roy felt disappointed after the series of failures although he decided to trust Toronto’s authority. He also made up his mind to make mechanical changes. The player had several consultations with a sports psychologist before he returned to the big leagues. The team promoted Roy to Knoxville and everything started to get better. After five starts and three complete games, he found himself back in Toronto. Roy came back to the team in the perfect form.

In 2005, the sportsman was again the leader in the team. He was among the top starting pitchers in the league. The player had to miss two weeks in May after undergoing an appendectomy but was back in the team by the All-Star Break.

Roy had a breathtaking 2008 season: he made his seventh and final Opening Day start for Toronto in 2009 and was named the AL All-Star starter.

Roy had a solid start at first significant highlight in the game against the Florida Marlins. Roy showed good results playing for the Phillies. The team took the first place in the NL East.

The year 2010 became very productive for the player. He pitched well all season, earning a starting nod in the All-Star Game.

During the 2012 season Roy suffered a muscle strain in his back. Because of the trauma he missed two months and had a high ERA, but he managed to gut out 11 wins against 8 losses.

In 2013, the player won his 200th career game, but could not continue playing due to the problems with health.

The athlete announced his retirement in December, 2013. Roy left sports when he was 36 years old. In the interviews, Halladay named the cause of his retirement: a back injury. He also added that he wanted to spend more time with his family and relatives.

The following years the sportsman appeared in baseball as a guest instructor to minor leaguers. In 2017, the Phillies invited Halladay as a "mental skills coach". Halladay also volunteered as a baseball coach at Calvary Christian High School in Clearwater, Florida where his oldest son played baseball.

After leaving baseball, Roy found himself a new outside interest: piloting the airplane.

Halladay was a married man. He had two children with his wife, Brandy. During the offseason, Halladay lived with his family in Tarpon Springs, Florida. Halladay's oldest son, Braden, committed to play baseball after his death. Braden was invited to Baseball Canada's U18 spring training camp in 2018, and pitched a scoreless inning in the Canadian Junior team's exhibition game against the Blue Jays. In the 2019 Major League Baseball draft, as a tribute to Halladay, Braden was selected by the Blue Jays in the 32nd round.

Roy made a lot of donations. Being a member of the Toronto Blue Jays, he and his wife invited children from the Hospital for Sick Children into "Doc's Box" at Rogers Centre during Blue Jays games. As part of his contract with the Blue Jays, the sportsman donated $100,000 each year to the Jays Care Foundation. He also worked with underprivileged children and was given several awards for that.

However, the player was known to have problems with drug addiction. An American sports magazine Sports Illustrated published an article in which it shared details of his struggle with drugs. The article also contained details of Halladay's battle with fame and restlessness. It was reported that the player was addicted to lorazepam, an anti-anxiety medication. He had been prescribed it after he got injured, but finally he began taking it too much.

One of his idols in sports was Mariano Rivera. In one of his final interviews, Roy was happy to recall a tutorial with Rivera at the 2008 All-Star Game. Roy asked him how he threw his signature cutter. In response, Rivera used a pen to trace his grip onto the ball, then gifted it to Roy.

The stats of a baseball player can be found at Baseball-Reference.com. The biggest fans of the player can buy Roy Halladay's blue jays jerseys and bobbleheads which are sold on the official sites.

The net worth of a baseball legend is estimated at $70 million as of 2017. All his earnings came from sports and numerous endorsements.

Halladay died on November 7, 2017, on the airplane accident. Roy was piloting the plane that crashed into the Gulf of Mexico. A sport plane had crashed upside-down into shallow water. The plane was said to be Halladay's, and he had tweeted four weeks earlier about his joy about buying the plane. He felt happy to make his dream come true.

In 2018, after the release of the death cause report, it was said that the player had high concentrations of morphine and amphetamine along with the presence of an antidepressant and trace amounts of alcohol in his blood. Halladay's widow, Brandy, paid emotional tribute to her husband during a funeral that was held in Florida one week after his death.