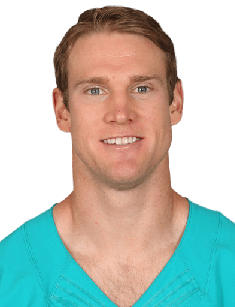 Ryan Timothy Tannehill III is a 30-year American football star currently playing on the quarterback position for the Tennessee Titans of the National Football League (NFL). His interest in this kind of sport appeared in the childhood, and he got immense popularity after being chosen by the Miami Dolphins in the 2012 NFL Draft.

Ryan Tannehill was born on July 27, 1998. At the time his family lived in Lubbock, Texas but several years later they moved to Big Spring, Texas. There the boy studied at Big Spring High School, joined high school football, basketball, and athletic teams.

Being a sophomore, he played 10 matches as a defensive back. One year later, he passed for 2,510 yards and rushed for 922 at quarterback. Next year, the player led his team to the playoffs passing for 5,258 yards and rushing for another 617. In the last studying year, he got injured: he suffered a separated shoulder. However, the football judges noted his skills and awarded him by second-team District 4-4A honors for two seasons. Ryan Tannehill graduated as a 3-star recruit according to Rivals.com.

Speaking about his successes in athletics, it should be noted that as a participant in the hurdling and jumping event such as 2006 District 4-4A Championships, he finished 3rd in the 300m hurdles (41.24 s) and earned a second-place finish in the triple jump event (13.19 m).

Tannehill graduated and got a bachelor's degree in biology in May 2011. He had planned to become an orthopedic surgeon specializing in knee injuries.

In 2007 the University of Houston, TCU, Tulsa, and UTEP proposed Tannehill join their teams, but the player turned down the invitations.

In 2008, Mike Sherman became a coacher of his team. Ryan visited a sports summer camp where his opposers were veteran quarterback Stephen McGee and redshirt sophomore Jerrod Johnson. They competed for the starting quarterback position. Unfortunately, Tannehill finished third after Johnson and McGee.

In his 5th game, Tannehill showed the results which were better than the freshmen's ones: he recorded 210 yards on 12 catches. Having made 6 receptions for 78 yards in the Iowa State game, the sportsman beat a previous record for receptions and receiving yards. Tannehill closed his redshirt season with 844 receiving yards. This result, by the way, beat Robert Ferguson's record set in 2000.

Ryan was yearning for development and announced the decision to become the starting quarterback at A&M. So, he publicly said:

"I still think of myself as a quarterback, I still want to be a quarterback here at A&M. Hopefully, that's the way it turns out. But if things don't happen that way, and Coach thinks I can better help being a receiver, then I guess I'm okay with that."

In 2009 there was a competition between him and Jerrod Johnson for this position. Johnson became the winner and began performing as a starting quarterback.

In total, in the season 2009, Tannehill's team made 46 receptions for 609 yards and four touchdowns. The player performed with excellence. Professional experts noted him more.

In the first 6 games of the season 2010, the team played wide receiver. In these matches, Tannehill scored 11 catches for 143 yards.

Both Tannehill and his former opposer Jerrod Johnson performed admirably, leading the team to a high rate.

Eventually, the player reached his goal: he got the quarterback position in the Aggies. And the team was not mistaken in choosing him: so, he did not fail, leading the team to the victory in the match against Texas Tech. Additionally, the player set a new school record, having passed 449 yards. Also, Ryan scored a 33-yard pooch punt, his first career kick.

Another victory the Aggies reached due to such a perfect quarterback was in the match against the No. 11 Oklahoma. Also, they beat Baylor, and No. 9 Nebraska and took hold in the top 25. In the last ring of the regular season, they defeated Texas. Tannehill subsequently got All-Big 12 Honorable Mention honors.

In the next 2011 season, Ryan Tannehill went on performing as a quarterback and a head for the Aggies. He threw for 3,744 yards and 29 touchdowns, with 15 interceptions. Unfortunately, the team lost the final game against Texas A&M's rival, the University of Texas. Interestingly, it was Thanksgiving Day.

In 2012, in the NFL draft, the Miami Dolphins selected the sportsman. He became the 17th starting quarterback since Marino. On July 28, 2012, Ryan signed a four-year $12,688 million contract with the team.

Ryan's debut match for the Miami Dolphins was the game against the Houston Texans on August 2012. In the ring, he made 219 yards, zero touchdowns, and three interceptions, but the team lost.

Two of his three interceptions were tipped at the line of scrimmage by defensive end J. J. Watt of the Texans. In response to Tannehill's performance, Dolphins head coach Joe Philbin stated

"We've (also) got to do a better job in (pass) protection, and at times the receivers have to protect the throw from the quarterback. So I would say, as is usually the case, there is a little bit of culpability across the board."

In the next games, the player improved the results: so, he made 200 yards, one touchdown and zero interceptions in the match against Oakland Raiders and led the team to victory.

Playing against the Arizona Cardinals, Tannehill set a new single-game record of 431 yards. This result exceeded the previous one set by rookie Dan Marino in 1983. However, the Dolphins lost the match with the score 24-21.

Several weeks later, Tannehill made the longest run of 31 yards. It was a complete record. The previous person to show a run of 30 yards was Pat White in the 2009 season. In total, in this season Ryan made 3,000 passing yards.

Ryan Tannehill began the next season with fighting against the Cleveland Browns. His 272 yards, a touchdown, and an interception helped the Miami Dolphins win. One week later, they faced Andrew Luck, also a second-year QB. The match took place in Indianapolis. Tannehill scored 319 yards for a touchdown, but he was sacked five times. However, the Dolphins defeated the opposers with the score 24-20.

In Week 5, Ryan's team faced the Falcons. Interestingly, the match was held in his home city. The fight happened to be successful again: the team won with the score 27-23 due to 236 yards and a touchdown by Tannehill. He led his team to a 3–0 start for the first time since 2002.

In the next game the Dolphins faced the Saints. Tannehill made 249 yards and also a touchdown pass, but it did not help the team: they lost the match with the score 38-17.

In Week 6, Ryan's team fought against the Ravens. They lost the match with the score 26-23.

The Miami Dolphins later had a match against the Bills. Tannehill went 19/37 for 194 yards and threw 3 touchdown passes, 2 interceptions, but his team was beaten.

In Week 8, there was a match against the Patriots in Foxborough. The sportsman went 22/42 for 192 yards throwing 2 touchdowns, 2 interceptions. The Dolphins lost again.

Week 9 gave the Dolphins a long-awaited victory: they won the match against the Bengals. The sportsman made 208 yards with a 1-yard touchdown, improving the score in his team's favor. So, they won with the score 22-20.

In Week 10, the Dolphins fought against the Buccaneers. Ryan Tannehill made 229 yards, threw 2 touchdowns, one interception, and two sacks in the 22–19 loss.

Dolphins faced the Panthers. In the match, Tannehill recorded 300 yards, but his team lost with the score 20-16.

In Week 14, the Dolphins had a winning match against the Steelers. Tannehill's 3 touchdowns, one interception, and 2 sacks helped the team finish the game with the score 34-28.

In Week 15, Ryan's team faced the New England Patriots. It was the best Tannehill's game in the year, he went 25 of 37 for 312 yards with 3 touchdowns and no interceptions.

The Dolphins fought against the Buffalo Bills – this game was successful both for the team and for the player: Ryan Tannehill went 10 of 27 for a small 82 yards, the team won with the score 19-0.

When Ryan performed for the Miami Dolphins, his coacher was Mike Sherman. However, in 2014 he quit, and the team hired new offensive coordinator Bill Lazor.

In the first match of the next season, Ryan's team faced the New England Patriots. He recorded 178 passing yards, two touchdowns and led the team to the victory.

In the penultimate match of the regular season against the Minnesota Vikings, Tannehill had a season-high 396 passing yards, four touchdowns, and one interception. The game was finished with Dolphins's victory with the score 37-35.

In the final game between the Dolphins and the New York Jets, Ryan's team was beaten and missed the playoffs.

On October 25, 2015, they beat the Houston Texans. Tannehill scored a perfect rating of 158,3 passers and set an NFL record for consecutive completed passes with 25. The next games were unfortunate for the player: so, in the match against the New England Patriots, he made only 2 interceptions and 0 touchdowns. In the next three games with the Patriots, Bills, and Eagles he fumbled one ball in the end zone for an opposition safety.

On December 6, Tannehill was called the fourth quarterback in NFL history to throw for more than 3,000 yards in each of his first four seasons in the league.

On December 15, the Dolphins lost to the New York Giants and, subsequently, missed the playoffs again.

Dolphins closed the season with the record 6-10. In the season Ryan made 4,208 passing yards, 24 touchdowns, and 12 interceptions.

The season 2016 started successfully for the Dolphins: they won the first 6 games. Tannehill himself managed to take par only t in 13 season games because of an injury. In 2016 the Dolphins reached the playoffs for the first time since 2008. The season was good for Ryan also: he made in total 2,995 yards (one of the best his career stats), 19 touchdowns, and 12 interceptions.

Before the season 2017, in summer Ryan Tannehill injured the left leg. The team was afraid that he tore his MCL or ACL and would require season-ending surgery. It turned out to be the truth, and Tannehill underwent surgery on August 11. He was temporarily substituted with quarterback Jay Cutler.

After his recovering, the team's coacher Adam Gase said that they were not going to replace Tannehill permanently.

Ryan played the first game after the trauma with 230 passing yards, 2 touchdowns and led his team to the victory with the score 27-20.

In Week 6, the news reported that the player got a shoulder injury and would miss the fight with the Chicago Bears. He was replaced by Brock Osweiler and recovered several weeks later.

He got back in Week 14 to face the New England Patriots and helped the Dolphins win.

The sportsman closed the season with perfect season stats: he had 1,979 passing yards, 17 touchdowns, and 9 interceptions.

Tannehill met his future wife Lauren in Panama City, Florida in 2009, in a spring break. Interestingly, they studied at the same high school. The couple had been dating for three years and married in January 2012.

Ryan and Lauren have a lot in common. For example, both of them are very religious.

The woman is a model. In this industry, she is most famous for becoming the face of Levinson Jewelers. Earlier she had worked as a cardiology nurse.

Now the couple has a little son Steel and is waiting for a daughter. They announced Lauren's pregnancy on Instagram in Autumn 2018. The news site rotoworld.com reports that family lives in their own house in Fort Lauderdale, the USA.

Ryan's game number on his jersey – “17”. So, in their photos together we see Laura wear the shirt with the same number which demonstrates their strong love.