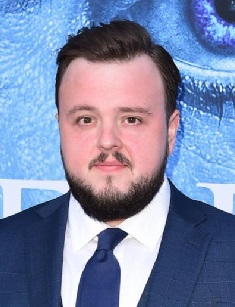 John Bradley is an English actor, he graduated from Manchester Metropolitan University with a Bachelor of Arts degree. His career started in 2011 with a big role which spread his fame all around the world. Since that time, he appeared in some movies and continued to play his biggest role of Samwell Tarly in HBO fantasy TV series Game of Thrones.

Besides John is an accomplished drummer and also tried his hand in stand-up comedy. He is English by nationality and Caucasian by ethnic group.

He is a second child in the family, his sister is 13 years older. Bradley grew up in a Catholic family in the south of Manchester. The actor attended St Paul's Roman Catholic High School. He studied Drama in Loreto College, which he graduated in 2007. In 2010 he got a degree of acting. He loves his parents and has a good memory of his childhood. As Bradley says, when he was a boy he loved Spice girls and has a poor number of friends among boys.

Since childhood, Bradley enjoyed the performance and did a little scene at home grabbing parent’s clothes. His family always encouraged his interest.

“I think I was inspired to be a performer before I was inspired to be an actor. There was just something about being in a different world. I found certain images and certain visual motifs very interesting. I was obsessed with Oliver. The musical. And what I used to do—and my dad still loves to bring this up, to my eternal embarrassment—I used to disappear for a while, when there was family around, and I used to cobble together a costume from various different things I could find”.

2011 was extremely successful, as Bradley bagged one of the leading roles in TV-series Game of Thrones and this work became his initial debut. That was his first audition and he had to study as quick as he can. That was a real jumpstart to his career. As his character has a progression, John had an opportunity to display his acting skills and talent during this long-lasting serial. A shy and unassuming guy recovering from an abusive childhood, Sam has risen to become a trusted adviser to kings and queens, as well as a devoted boyfriend and father.

The actor is not a particular physical specimen. This fact helped him to obtain the role of Samwell Tarly. This feature helped him to play Sam, as in real life he had quite similar problems. John was teased because of his weight too. Thanks to his work he overcame his weight concern. In one interview he said that the playing the role of Samwell Tarly inspired him and helped to feel more comfortable in his own skin.

This role helped to define him as an actor and that opened a lot of opportunities to his beginning career. He was appreciated greatly and was nominated for several awards. According to media critics, he is one of the skilled artists of GOT.

Since the inception of the show, he lost some weight and looks slimmer, but it is not to such extent that it would be very eye-catching.

‘I’ve just been wondering, why are you still so fat?… I just don’t believe it. You’re right up north, you’re not eating anything, you’re trekking across landscapes and running from things all the time. You should be losing weight,’ “And I said, ‘OK, look. This is a fantasy show. We’ve got fire-breathing giant dragons, we’ve got ice zombies, we’ve got a woman giving birth to a cloud – why is it me still being fat that you just don’t buy?’ ”.

He took part in other major projects on TV and in films: Traders, Grimsby, Man Up, Shameless and others and continued to awe the crowd. In 2019th John finished his work on GOT, there was a premiere of the final season of legendary TV series in April on HBO.

In 2012, he made his feature movie debut opposite Keira Knightley in the Joe Wright’s adaptation of Anna Karenina. But the actor hasn’t any award despite his successful career and several nominations. The young actor continues to work on his acting skills and getting better and better.

He is not married and doesn’t have children. There were a lot of rumors that he dated with his partner Hannah Murray who played his wife on GOT. Both John and Hannah confessed that they enjoyed working with each other. But they didn’t comment and give any confirmation about their love affair. He was in a relationship with Emily Dean but it wasn’t a long-lasting affair.

Though the actor is not married, he has a pretty committed relationship now. His girlfriend is Rebecca April May, entertainment journalist. Besides his acting career, he is also the owner of his own brand “Bradley motors”. This is a big project making a lot of revenue. That is why he often travels on different cars. He lives in a small but luxury house with a swimming pool, a small lawn, and a car porch. His net worth is about $1 million.

He is a supporter of Manchester United and loves music, especially hip-hop, and plays drums. Bradley is registered in social networks and keeps a diary on Instagram.

John Bradley with ex-couch of MU.