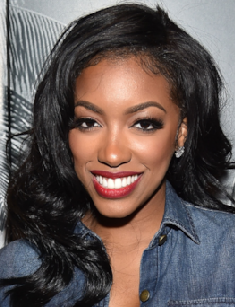 Porsha Dyanne Williams is an American social media celebrity, actress and model. She is mostly known for her participation in the television series The Real Housewives of Atlanta, where she started shooting in 2012. In 2011–2013 Porsha was married to the famous football player Kordell Stewart, and for now, she is engaged to the entrepreneur Dennis McKinley.

Porsha was born in 1981 in Atlanta. Her mother’s name is Diane and her father’s – Hosea Williams II. Porsha also has a sister Lauren and a brother Hosea. As we can see, Hosea is a popular name in this family. Another owner of that name is Porsha’s grandfather, Hosea Williams, who was known for being a civil rights leader, philanthropist, politician, and that’s not the end of the list of his activities.

She graduated from the Southwest Dekalb High School which was situated in her native state, Georgia. Then, she went to the American InterContinental University in Illinois, where she got her degree and majored in business information technology. When Porsha was a student, she worked in sales, and then she was at the Center for Disease Control. Generally, she always had one or two jobs mostly before her marriage to Kordell Stewart.

As Williams says in one of her interviews that if you are young, if you live in Atlanta and want to become a model, you need to start from music videos. So, at the age of 21, she did that, because she was interested in a modeling career.

"It's not like I danced on a tabletop naked. I was young and having a good time” – says Porsha about her appearing in videos.

In 2005, she was a model for the calendar of Atlanta Dymes, the company that is connected to the “print and online projects featuring the sexiest female models in ATL." There were no nude pictures of Porsha; however, her photos that demonstrate herself in the swimming suit and her long feet are very sexy.

As a model and celebrity at the same time, Williams cares about her appearance and wants to help others too. She has even opened her own company, Naked Hair that sells hair extensions made of virgin human hair, which can help women to have kind of hair that they always wanted. Porsha likes to change her hairstyles: she has been with long and short hair both.

Porsha’s first huge appearance on television was in 2011 on the reality television series Platinum Weddings, where her wedding with Stewart was shown.

Then, in September 2012, it was announced that Williams and Kenya Moore became a part of the fifth season of the TV series The Real Housewives of Atlanta, alongside returning cast members like Cynthia Bailey, NeNe Leakes, Phaedra Parks, and others. Porsha made her first appearance in the third episode in November 2012, where she was shown to have not a very nice meeting with Moore at the charity event for Feed the Homeless. The actress still stars in that show.

Williams has a net worth of $5 million for now. When she was married to Kordell Stewart, their net worth was about $16 million. Unfortunately, the pair had a prenuptial agreement that left Porsha with no support after the divorce.

In 2011, Porsha married Kordell Stewart, a sportsman, and their marriage was filmed for the Platinum Weddings. During their relationship, she was a stepmother to Stewart’s son Syre from his previous girlfriend, Tania Richardson. In 2013, the pair divorced, and the story is really extraordinary: Porsha found out that her husband had filed for a divorce through Twitter.

In September 2018 Williams announced that she was pregnant, and the baby father is Dennis McKinley, her boyfriend, but currently a fiancé. The process of the proposal was very sweet: Dennis took Porsha via helicopter to a particular place with all the candles, roses and even live performance of Lil' Mo who sang Williams' favorite song "4 Ever". On Porsha's Instagram, we can see her happy face after this day and also a huge engagement ring! The engagement became public in October. In February 2019 there was a big event thrown by Porsha’s fiancé – baby shower. Among Williams' closest friend and family, there were also her co-stars Cynthia Bailey, Eva Marcille, and Kenya Moore.

The pair’s baby, who got the name Pilar Jehna, was born in March 2019. By the way, the news about Porsha's pregnancy was kind of a miracle, because she had a miscarriage six years ago.

What’s good for Porsha’s admirers is that she is an active user of social networks, so we can see her lifestyle on Twitter and Instagram. Besides, Williams is a pranker some way. In 2014, she and Tom Joyner, a radio host, announced that they are a married couple, which, of course, was an April Fools’ Day prank. It is not the only time when what we see is not what it is, actually. In 2017, during the ninth season of Real Housewives of Atlanta’s Williams has been dating Todd Stewart but it turned out that it was just a ploy for the cameras.

However, sometimes being a social media celebrity is really hard. In August 2018, Porsha’s co-star Kandi Burruss made a birthday party for her husband, Todd Tucker. Williams was invited, but, eventually, kicked out of this event. Why? Well, there is an official version that Porsha started being aggressive and attacked another guest, Kandi’s friend, but Williams denied that. Maybe she was a little drunk and started dancing what somehow made others uncomfortable; perhaps she had a fight with that woman for a real reason, nobody really knows.