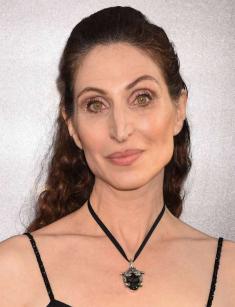 Anyone who has ever seen Bonnie Aarons will remember her for a long time. The actress's appearance can be described briefly. She is an extraordinary woman who does not correspond to Hollywood standards. Moreover, the titles of the films in which she starred are also catchy. For example, Drag Me to Hell, Hell Ride, I Know Who Killed Me.

The skepticism of other people influenced Aarons’s decision to devote her life to the cinema. They could not understand what characters the woman with such a nose and eyes can portray. But Bonnie’s acting career refutes the stereotype that the ideal appearance is one of the prerequisites for an artist to achieve success.

The details of Bonnie Aarons’s biography is unknown. The media representatives concluded seeing her Instagram page that the woman grew up in a large family. They can only say that she was born on June 3, 1979, in Los Angeles.

Bonnie studied in an acting school in New York City, after which she left for Europe, not receiving reasonable offers in her homeland. The actress appeared in short films and commercials abroad.

She made her feature film debut playing the role of a prostitute in the comedy Exit to Eden, directed by Garry Marshall who also shot Pretty Woman and Runaway Bride with Julia Roberts and Richard Gere.

A turning point in Aarons’s filmography was the thriller Mulholland Drive (stylized as Mulholland Dr.), named as the greatest film of the 21st century in a poll conducted by BBC Culture. Bonnie played only a bit part, but Naomi Watts, Laura Harring, and Justin Theroux got the leading roles. The film earned director David Lynch the Prix de la mise en scène (Best Director Award) at the 2001 Cannes Film Festival and the César Awards, as well as an Academy Award and Golden Globe nominations.

In 2001, Harry Marshall recalled the actress with an unusual appearance again, when he decided to shoot a modern Cinderella story. In melodrama The Princess Diaries and its continuation The Princess Diaries 2: Royal Engagement, Aarons portrayed nervous and insidious Baroness Joy von Troken, dreaming of the throne in the fictional country of Genovia. British star Julie Andrews played the Queen, and Anne Hathaway played a young American woman who suddenly became a royalty.

In the action movie Hell Ride with Dennis Hopper and Michael Madsen, Aarons’s character first got the name associated with black or spiritual forces, Mud Devils Ref. The film is full of bloody scenes and tells about a motorcycle gang, obsessed with revenge for their dead member.

The actress got two roles in the horror film Drag Me to Hell, directed by outstanding Sam Raimi. Fans have long appreciated Raimi's projects Evil Dead and the superhero Spider-Man trilogy. The new movie told about a bank employee who refused to help the gypsy who then cursed the woman. So, the heroine has to find her to get rid of the demon.

Later, Bonnie's credentials included the role of General Abogados in the comedy-horror film Dahmer vs. Gacy. In the project, the creators adapted the story of the serial killers, Jeffrey Dahmer, and John Wayne Gacy, who committed crimes in the 70s and 90s of the 20th century. Both men have been cloned in a secret laboratory; later, they escape and fall back into their old ways.

In 2012, Aarons wrote the script and became the producer of the series And You Know Who You Are. Bonnie invited Kimmy Robertson (the first season of Twin Peaks), Lorna Bennett (the fantasy action movie Torchwood) and Lisa Valenzuela (the comedy Valentine's Day) to work on the project. The actress also played a bit part in Valentine's Day which featured the outstanding cast: Patrick Dempsey, Ashton Kutcher, Jessica Biel, Jessica Alba, Emma Roberts, and Kathy Bates.

In 2016, director James Van filmed The Conjuring 2, the sequel to his film. In both horror films, Vera Farmiga and Patrick Wilson got the leading roles, and the second installment had a new character, Valak, the 62nd Christian demon of ancient magic (Aarons). Some websites were sarcastic writing that the tall and slim actress (Bonnie's height is 5.64 ft. (172 cm), and the weight is 123.45 lbs. (56 kg)) did minimal makeup to portray one more creep-hero.

The personal life of Bonnie Aarons is a closed book. There are photos of Bonnie with a man on social media. Reporters assume that his name is Howard Baumer. It is not known whether he is her husband or just a boyfriend.

Hollywood directors have liked to make prequels whose story precedes that of a previous work. For example, Star Wars Episode I: The Phantom Menace, Batman Begins, Indiana Jones and the Temple of Doom, etc.

In 2017, they released Annabelle: Creation which is the prequel of the horror film Annabelle. The last movie also precedes the action of The Conjuring. At the end of the movie, viewers saw the nun, possessed by the devil, which is a reference to another blood-curdling story.

In 2018, the spin-off of The Conjuring entitled The Nun was released. The title character, the demonic nun, first appeared in the sequel to the first installment. The popularity of both films made the producers create a separate story about the woman in a black dress.

Bonnie Aarons was offered the leading role. At first, David Leslie Johnson-McGoldrick, who created The Walking Dead, became the screenwriter, but then he was replaced by Gary Dauberman, the author of the famous thriller It. In the story, one more nun in her novitiate (Taissa Farmiga, the sister of Vera Farmiga) appeared in the monastery.