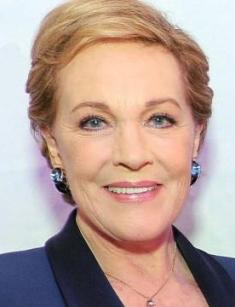 Delightful Julie Andrews started her creative career in the 50s as a music hall star. Her wonderful voice captivated the theater audience first in her native London, and then on New York Broadway, where she shone in the production of My Fair Lady.

Success awaited the actress on the screen too: the role in the movie Mary Poppins brought her an Oscar in 1964. Andrews knows firsthand what the finest hour means and how it feels to live through years of oblivion. With the reduction of interest for musicals, the career of the actress slowed down, and in 1997 she lost her beautiful voice completely. However, the celebrity did not give up and continued to act. She found a new vocation - voicing-acting in movies.

Julia Elizabeth Wells was born on October 1, 1935, in Walton-on-Thames, Surrey, England. Her mother, Barbara Wells, was a pianist, and her father, Edward worked as a teacher of metalwork and woodwork. As a 15-year-old girl, Julie learned that her birth father was another man, a family friend with whom her mother had an affair. The girl grew up with her stepfather, singer Ted Andrews, whom Barbara married in 1943.

In her autobiography book, the actress wrote that her stepfather was a bad man. Sometimes, when he got drunk, Ted tried to seduce the young stepdaughter. This forced Julie to put a lock on her room door. The Andrews lived very poorly and tried to survive in the London slums, but gradually the touring activities of the couple began to bring a good income. And it was partly because of Julie.

Ted could not help but notice the vocal abilities of his stepdaughter. He suggested taking the girl on tour and changing her name to Andrews to sell the performances as a family one. 10-year-old Julie stood on a crate of beer to reach the microphone. The song performances of the little girls touched the audience.

Soon the Andrews were able to save money and move to Hersham (Surrey), Ted's hometown, where they settled in a large house. Young Julie attended Cone-Ripman School (now known commonly as ArtsEd) in London, then continued her education at Woodbrook school, a state school in Beckenham.

In parallel with her studies, she began music lessons with an individual vocal teacher Lilian Stiles-Allen, who was impressed by the vocal range of her student in 4 octaves. At the age of 13, the girl became the youngest singer ever to perform before the Royal family. At 15 she made her debut on radio and television, and at 18 she played in the production of Cinderella in London's Palladium.

Julie's talent did not go unnoticed. In 1954 American producers invited the girl to New York, to play a significant role in Broadway The Boy Friend. The image of Polly Browne brought Andrews great success. But it was only a prelude to the recognition, which fell on the actress after the role of Eliza Doolittle in the production of My Fair Lady (1956).

Julie's partner was Oscar-winning actor Rex Harrison. This incredible tandem shone on the Broadway stage for about two years, earning the astonishing love of the audience. The star performance brought the actress a prestigious Tony award for best actress in a musical, the title of The Queen of Broadway and photos on the covers of leading magazines.

The next leading role was waiting for Julie in the musical Camelot in 1960. And she was again nominated for Tony, but Julie was not able to reach the same level of success this time. The girl's thoughts started revolving around movies more and more.

The actress wanted to embody the image of Eliza Doolittle in a screen production, released in 1964. But the producers gave the role to Audrey Hepburn, believing that her name would bring the audience in theaters. Julie got another exciting offer. Walt Disney Studio invited Andrews to play a part in the musical movie Mary Poppins (1964).

Julie enthusiastically plunged into the work and soon proved that it was able to bring the project to the leaders of the box office. The musical movie became one of the most commercially successful in the history of the Studio, and the incredible acting brought the actress a high award - an Oscar for Best Actress.

The following year, Andrews was again among the Oscar nominees for her role in the motion picture The Sound of Music (1965). This time the award bypassed the actress, but the movie was recognized as the best film of the year, and largely thanks to the acting skills of the British actress.

Miss Andrews played a simple girl Maria, who goes to serve in the house of the widowed Captain von Trapp (Christopher Plummer), becoming a governess for his seven children. Young pupils at first do not like the new nanny, but Maria gradually wins their hearts, introducing them to singing. And soon she conquers the heart of the captain himself.

Images of respectable nannies and governesses, appearing in her filmography, one after another strengthened the actress in this role. Moving away from the same type of characters, Julie starred in a dark spy thriller directed by Alfred Hitchcock Torn Curtain (1966), becoming a partner of the famous Paul Newman. A new project in the same year was the epic drama Hawaii about the origin of missionary work in Hawaii in the early XIX century.

Another success waited for the actress after working on romantic comedy Thoroughly Modern Millie(1967). The role of an ambitious stenographer, a hunter for a wealthy boss earned her a nomination for a Golden Globe.

In the '70s, the actress was predominantly occupied with starring on television. She had her own show, became a star presenter of the famous Muppet Show and other projects. But in the '80s came a fruitful period for her. Among the brightest films of the decade was the musical Victor / Victoria (1982) about a singer who, after a fruitless search for work, is forced to impersonate a transgender singer.

This role perfectly conveyed Julie's incredible voice, as well as her first-class acting. As a result, Andrews again became an Oscar nominee in the category Best Actress, as well as the winner of the Golden Globe and David di Donatello.

Then the Britt shone in a series of major roles, many of which were marked by prestigious film awards. In the melodrama The Man Who Loved Women (1983) her character, a psychoanalyst Marianna treats the main character (Burt Reynolds) for obsessive love for women. For her work in Andrei Konchalovsky's Duet for One (as a seriously ill violinist Stephanie Anderson), Andrews was again nominated for the Golden Globe as the best dramatic actress.

The early '90s were marked by the participation of the actress in the romantic comedy A Fine Romance with the favorite of all women, Marcello Mastroianni. In 1995, Julie Andrews returned to the time of her youth - to Broadway. After a 35-year pause, she performed a stage version of the musical Victor / Victoria, and then went on a world tour.

In 1997, a horrible thing happened. As a result of unsuccessful surgery on the ligaments (after the appearance of benign nodules), she lost her beautiful voice. At first, doctors assured the singer that it would recover within a few weeks. But after two years, the actress could not get rid of the hoarse voice. The woman sued the doctors, and in 2000 the case was settled for a certain amount of compensation (the sum is unknown).

In 2001, the British actress appeared in the movie the Princess Diaries starring Anne Hathaway in the leading role, playing Queen Clarisse Renaldi. It was Julie's second job in Disney projects after the success of Mary Poppins. Then Andrews played the part of the nanny in the Disney film adaptations of the adventures of Eloise (Eloise at the Plaza and Eloise at Christmastime).

In 2004, a new professional phase began in the life of the actress. She started dubbing animated films, which she continued to do now. Andrews voiced Queen Lillian in all parts of Shrek, Marlena Gru in the movie Despicable Me and the characters of other projects.

In 2016, Andrews, along with her daughter Emma Walton Hamilton and producer Judy Rothman created a series for preschoolers, Julie's Greenroom. The series premiered on Netflix in 2017.

The happy personal and family life of the actress did not come at once. Her first marriage to theater designer Tony Walton was short-lived.

The couple met at home in England in the late 40s and married in 1959. In 1962, their daughter Emma Katherine Walton Hamilton was born in London.

In 1969, the actress married screenwriter and director Blake Edwards. This union was a happy one.

The couple lived in harmony for 40 years, raised children from their first marriages Emma, Jennifer, and Jeffrey, and adopted girls Amy and Joanna.

Karathen, a mythical underwater creature, that helps the leading character to stop the war between the terrestrial and marine worlds, speaks with the voice of Julie.

The actress is full of creative plans for 2019 and promises her fans to surprise them with new projects.