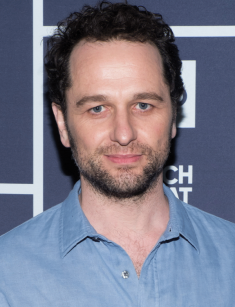 Matthew Rhys Evans is an actor with the Welsh ethnicity. He is mostly known for his role of Philip Jennings in the TV series The Americans (2013–2018), for which he got two Golden Globe Award nominations and a Primetime Emmy Award. Rhys is often called “the man of 1000 accents”, and this is true: he can demonstrate various accents from Welsh to American which can make anybody charmed. There is a video on the internet of Matthew getting his Emmy and telling the speech with his sweet Welsh accent.

Matthew Rhys was born in Wales in 1974. He lived with his family in Cardiff and attended schools here. When Rhys turned 17, he played Elvis Presley in a musical at school, and after that, he got accepted to the Royal Academy of Dramatic Art in London. This Academy was also attended by Matthew’s older sister, Rachel, who now works as a journalist for BBC.

During that time when Rhys was studying at RADA, he appeared in the series Back-Up and film House of America. After graduation, the actor came back to Cardiff, where he starred in the Welsh film Bydd yn Wrol (Be Brave). For that role, Matthew won Best Actor at the Bafta Cymru.

In 1998, Matthew went to New Zealand, where he starred in a television drama called Greenstone. Next year, he played the role of Demetrius in Titus, the adaptation of William Shakespeare's tragedy Titus Andronicus. After that, the actor returned to Wales again and starred in The Testimony of Taliesin Jones and Very Annie Mary (2001).

In 2000, Rhys played the lead role in Metropolis, a drama series about the lives of six young friends in London. As you can see, Matthew always travels to various places for filming. In 2002, he was in Ireland, where he starred in the 18th-century adventure movie, The Abduction Club. After that, the actor played the primary role in Tabloid and moved again to New Zealand to star in the drama series The Lost World for the BBC.

After starring in the show Brothers & Sisters, Matthew moved to Santa Monica. In 2012, Rhys starred in a two-part drama adaptation of Charles Dickens' The Mystery of Edwin Drood for the BBC.

In 2016, Rhys was a co-host of The Wine Show together with another actor, Matthew Goode. Their show got a lot of positive reviews because it was not boring. They used to sit at the luxury villa, taste some wine, and have a nice talk, which was extremely interesting for the audience. Besides his own show, Rhys also appeared on other projects as a guest, for instance, on The Ellen DeGeneres Show.

Rhys starred together with Keri Russell in The Americans, a 1980s drama about Russian KGB agents. In this project, Matthew showed his excellent American accent. By the way, Rhys and Russell portrayed partners on the screen while being the couple off-screen. In 2019, in the interview, Rhys announced that he would play the leading role in the upcoming series Perry Mason. Also this year, Rhys became the No. 1 on People With Money’s top 10 highest-paid actors with an estimated net worth of $75 million.

Matthew started his career at the theatre in 1997, but his first huge project was the stage adaptation of The Graduate at the Gielgud Theatre in London in 2000. In 2012, Rhys played the role of Jimmy in the Off-Broadway renewal of Look Back in Anger, a play of John Osborne. It can be called as his breakthrough after The Graduate.

Besides, Rhys’ theater credits also include King Lear and Romeo and Juliet at the Royal Shakespeare Company.

Since 2014, Rhys has been dating Keri Russell, his colleague who also starred in The Americans. Actually, they might start their relationship earlier, in 2013, but these two appeared as an official couple at the NYC’s The Public Theater in April 2014. Keri is not Matthew’s wife, and they are not married yet. In 2016, they welcomed their first child.