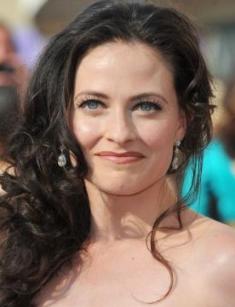 The Woman has won not only Sherlock Holmes’s heart – millions of people all over the world love Lara Pulver. The actress earned much fame after the BBC series Sherlock with Benedict Cumberbatch, where she played beautiful Irene Adler. Besides, the audience remembers her for the movies Edge of Tomorrow, Underworld: Blood Wars, and the series Fleming: The Man Who Would Be Bond, Robin Hood, Da Vinci's Demons.

The would-be artist was born on September 1, 1980, in Southend-on-Sea, Essex. The girl’s father was Jewish, and her mother converted after the marriage. However, the parents divorced when their daughter grew up a little; eleven-year-old Lara stayed with the mother.

Pulver proved to be a talented child from an early age: she gladly appeared on the stage without any sign of shyness. More than that, the future celebrity had an excellent voice and an ear for music. The artistry found its manifestation when she turned 14. Lara was working on her acting skills at the National Youth Music Theatre and learned how to dance at The Liz Burville Dance Centre, Bexley.

The young talent was noticed in 1997: she was admitted to the Doreen Bird College of Performing Arts.

Lara was one of the brightest and most promising students; the college has posted her story of success on its website. Three years later, the actress took her first steps.

Pulver started her career with a theater stage. She had been invited to West End musicals when she was a student; the woman also participated in regional events and received many invitations to national tours.

2008 brought the first prestigious achievement: the nomination for The Olivier Awards for Best Actress in a Musical for the role of Lucille Frank in Parade. The project was premiered in the legendary Donmar Warehouse, Covent Garden, and then toured in the United States, earning much success in Mark Taper Forum, Los Angeles.

Lara continued to work hard and developed her music career; she recorded a song for the 2008 album Act One – Songs from the Musicals of Alexander S. Bermange.

The TV audience made acquaintance with the British actress in 2009 when she played Isabella in the BBC’s Robin Hood. The success was even more solid when Lara personified the fairy Claudine Crane in the third season of the series True Blood. The next year, Pulver was given the lead part of the new sheriff, Erin Watts, in the spy drama Spooks.

The starry role of Irene Adler came in 2011: it was the new screen version of Sir Arthur Conan Doyle’s book about Sherlock Holmes. This part made the actress internationally famous. She collaborated with Benedict Cumberbatch in the second season (episode “A Scandal in Belgravia”).

The actress appeared naked on the screen in this project. Later, she told journalists she would not do anything for fame and money. Both critics and ordinary viewers appreciated the new celebrity’s talent.

Since that time, Lara Pulver has proved many times that her triumph was not accidental. In 2013, she joined the cast of the popular series Da Vinci’s Demons and worked on it for the next two years. All the actors were to work with personal coaches to keep fit; Pulver confessed it was terrible but helped her make her body almost perfect.

In 2014, fans welcomed the actress in another episode of Sherlock, “The Sign of Three”.

The same year, the artist played the female lead in the mini-series Fleming: The Man Who Would Be Bond; Dominic Cooper, Samuel West, and Anna Chancellor were her stage partners.

It is the story about the creator of legendary James Bond, Ian Fleming. The books about the agent are based on the author’s life and adventures. The producer of the project, Douglas Rae, marked that Dominic, who played Fleming, could become a candidate for next Bond.

In 2014, fans could also see Lara Pulver in the fantastic action Edge of Tomorrow; she had a secondary role of Karen Lord and collaborated with Tom Cruise, Emily Blunt, and Bill Paxton.

The artist’s first marriage to the American actor Josh Dallas did not last long. The couple met in 2003 when Josh studied at Mountview Academy of Theatre Arts; four years later, on Christmas, the lovers married in Devon.

The newlyweds spent their honeymoon in the Maldives. The marriage seemed spotless from the outside, but Pulver and Dallas divorced at the end of 2011. Rumors had it the actor’s affair with his stage partner Ginnifer Goodwin caused the break-up when they were working on the fantasy series Once Upon a Time. Prince Charming fell in love with Snow White on the screen and in real life as well; the artists married later and had two kids together.

In her turn, Pulver enjoyed a romance with Tom Hiddleston, who was, by the way, Benedict Cumberbatch’s best friend. Still, this relationship did not finish with a marriage.

The actress’s personal life improved in 2012: she began to date her colleague, Raza Jaffrey. They married in December 2014, and the son Ozias Jaffrey was born in February 2017.

Pulver mentioned in her interviews she made good friends with her Sherlock partner Benedict Cumberbatch; he even offered her to collaborate in a musical.

Journalists also asked Lara if she was a candidate for the role of the first female Doctor in the iconic series Doctor Who. Pulver confessed it would be a great honor for her but doubted fans would be ready for that. In summer 2017, it was announced that the 13th Doctor would be a woman: Jodie Whittaker took the part; fans’ reaction to the novelty was mostly positive.

In November 2016, the fantastic action Underworld: Blood Wars was premiered. Lara personified Semira, the leader of the Eastern Coven of vampires. The fall of the next year was marked with the series Philip K. Dick’s Electric Dreams; each episode was a screen adaptation of the writer’s stories. The actress played Paula in the episode “Real Life”.

In April 2018, fans could enjoy their favorite’s acting in the mini-series The City and the City.