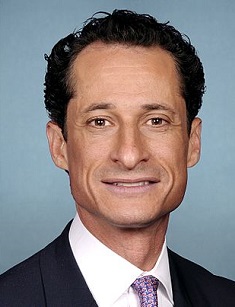 Anthony David Weiner was born on September 4th, 1964. He is widely known as one of the American former Democratic congressmen who won seven terms as a Democrat. He also came into limelight for the negative aspects such as a sexting scandal that led him to serve in the U.S Prison for 21 months. He was also charged with a fine of $10,000.

Anthony Weiner is the middle son of the Jewish parents Mort Weiner and Frances Weiner and was born in New York City. He lived in the Park Slope neighborhood of Brooklyn. His father was a lawyer and mother was a public high school math teacher. He has two brothers. His elder brother was killed in a hit-and-run case in 2000 whereas his younger brother is a chef and co-owner of a lot of restaurants in New York.

He attended P.S 39 The Henry Bristow School. He also took the Specialized High School Admission Test and was admitted to Brooklyn Technical High School. After graduating high school, he went to attend SUNY Plattsburgh and passed out with a Bachelors Political Science in 1985. During his college days, he started participating in politics and was named the most effective student senator.

Anthony Weiner is a former Democratic Congressman in America who served as the representative of the New York’s 9th district for over 12 years. He was really popular as a politician as he won 7 times as a Democrat and all of his votes were no less than 60%.

In the starting of his political career, he joined the staff of Charles Schumer who was the United States Representative. He worked for Schumer for three years in Washington, D.C and then transferred to the district office in Brooklyn. This was the time when he was encouraged by Schumer to join local politics.

He got his chance to be a part of active politics in 1991 when he participated in the Democratic primary elections. He won and became the youngest councilman in the New York City history at the age of 27. He remained in the city council for the next seven years and initiated many programs to address important issues that affected the lives of people. One of his major works in that period was to help revive the Sheepshead Bay area.

In 2005, Weiner participated in the New York City mayor election. He started a campaign against the current standing mayor but eventually came in the second place. In the 2009 elections, he was again nominated as a candidate, but the New York City Council wanted to extend the term limit for Mayor Bloomberg. In the 2013 elections, after resigning as a congressman, due to the scandals facing him, he decided to stand again for the mayor elections and requested the candidates to give him the last chance to work for them. His wife Huma Abedin was also with him during his election campaign that gave strength to his stand as he was with his family. However, he lost the election by receiving only 4.9% votes.

After resigning from Congress, he created a form called Woolf-Weiner Associates. This was a consultation firm that advice a lot of companies. In July 2015, he was hired by the MWW Group which is a PR Firm as a part-time consultant however his employment was ended in two months.

Anthony Weiner was born to a Jewish family. He got engaged to Huma Abedin who is also a long-time personal aide to Hillary Clinton. They got engaged in May 2009 and got married in July 2010. The ceremony was officiated by Bill Clinton. His wife Huma Abedin is a Muslim from Indian and Pakistani descent. They have a son named Jordan Zain Weiner who was born in December 2011.

Huma filed for divorce from Weiner after the scandal hit the media. In 2017 after he was charged guilty, Huma filed for a divorce. However after she filed the divorce in the court, the FBI further investigated the Sexting scandal and found out some new information from the 15-year-old student who claimed that Weiner had been exchanging messages with her over the time of several months. Following this news both Weiner and his wife withdrew the divorce case from the court in January 2018 saying that they did not want their son to face any more embarrassment. Since the divorce case in court was in the medial light, they decided to settle it in private for the sake of their six-year-old son.

However, despite the ongoing on and off relationship between Weiner and Abedin, it is being speculated by some media outlets that they might reconcile with each other like they have been doing in the past. But since the prison sentence of Anthony Weiner is about to end in the recent days, the speculation will be put to a stop when the couple comes out with the final decision for the media.

Weiner has an interest in baseball and is a fan of the New York Mets. He also played baseball during his college days. His interests also include ice hockey, and he loves New York Islanders. Some of his favourite songs are Excitable Boy by Warren Zevon, and The Harder They Came by Jimmy Cliff.

Anthony Weiner has been involved in a big sexting scandal that came into limelight in 2011. The scandal was big and was in the public eye for about half a decade. Weiner used his public Twitter account to send a link of sexually explicit photographs of him to a woman who was his follower on Twitter. The message was sent on May 27th, 2011.

The woman was a 21-year-old college student. Various media outlets including CNN described the picture as a ‘lewd photograph of a man bulge in underwear. The picture was immediately deleted from his Twitter account, but the woman named Dan Wolfe took the screenshots of the original message.

She sent these pictures to the blogger Andrew Breitbart who later published them. He denied the accusations in the beginning and went on saying that his account has been hacked by a political opponent. He even said that the picture was not him and that it could have been a plan against him. A lot of bloggers also accused the victim of planting the whole scandal.

On 6th of June 2011, another picture of Anthony Weiner came out which was a cropped picture of him shirtless. It was from a different woman from the internet. Apart from this, there was another picture that was much more sexually graphic.

Following the reveal of this picture, Anthony Weiner hosted a press conference where he accepted his faults and apologized to the media. He also accepted that the pictures that were sent to those ladies were him and he also accepted that he was a part of several other inappropriate conversations over Twitter in the past years. Media was outraged, and he apologized for lying in his previous statements.

A clear picture was also leaked through the listeners’ Twitter account of The Opie and Anthony Show. An investigation by the House Ethics Committee was set up o determine whether or not Weiner had officially violated the House rules. A lot of members wanted his resignation, and hence he was asked to resign. Following this reveal, he resigned from Congress on June 21. The party had to host a special election to replace him, and Republican businessman Bob Turner took his place in September 2011.

After the first sexting scandal, there was a second sexting scandal that took place on July 23, 2013. Weiner had returned to politics after and was a part of the New York Mayor race. It was found out that Anthony Weiner was operating a fake Twitter account under the name of Carlos Danger. He sent out sexually explicit pictures to a 22-year-old woman. He had contacted the woman in late April 2013 almost after a year he had resigned from Congress.

The woman named Sydney Leathers was a native of Indiana. She came in contact with Anthony after she showed her disapproval of his extra-marital acts and behaviours. In response to these allegations, Weiner said that he had already told the media that more such pictures will come out and that he will not be backing off from the election campaign.

After a while, the identity of the woman involved was confirmed, and a lot of articles were printed about him in different newspapers and magazines. On July 25th Anthony Weiner had a news conference where he admitted that he had sexted three more women after he had resigned from Congress and that there was a total of 10 women that were a part of the entire case.

The media was exaggerating when they said that there were dozens and dozens of women involved. This statement leads to the resignation of Danny Kedem who was his campaign manager. Weiner lost in the election and came the fifth place since his popularity had gone down excessively.

The next scandal was seen in 2016 when a report in New York Post said that Weiner was again involved in sexting another woman and he had sent her pictures on July 2015. The picture was of him laying with his toddler in the bed sleeping next to him. It was soon that the news broke out about him and his wife getting divorced.

Later in September 2016, it was reported that Weiner was again involved in sexting an underage girl who was only 15 years old. NYPD and FBI both started investigating Weiner and both the devices used by Anthony Weiner and his wife were seized. On May 2017, it was reported that Anthony Weiner had surrendered to FBI and he wanted to plead guilty on the charges of sending obscene material to a minor.

The case took into action, and Weiner was charged with 21 Months in prison. He seemed to be extremely apologetic in front of the judge during his court hearing and also reportedly cried. He said that he has a sickness, but it is not an excuse for his behaviour.

He began serving his sentence in prison in November 2017. On May 14th it was seen on the bureau website that Anthony Weiner will complete his sentence a few months earlier than his official release because of good conduct.

Apart from the sexting scandal, he was also named as one of the toughest bosses to ever work with. It was reported in 2008 by The New York Times that he was a workaholic and also made his staff work extra hours. Even when they were not working, he wanted them to stay constantly connected to him via blackberry. He also yelled at his staff and threw office furniture frequently. This was also the reason according to the Times that his staff turnover was the highest amongst all the other candidates.

To this controversy, Weiner admitted that he had pushed his staff to work hard, but in regards to shouting he said that it was his normal pitch of voice and style of talking. Some of his employees did criticize him for his work ethics, but the other praised him for his hard work as a congressman and the amount of time and effort he dedicates to it.

Anthony Weiner and Huma Abedin were featured in the 2016 documentary, Weiner which was based on his 2013 mayoral campaign. The movie was premiered at the Sundance Film Festival. He has also appeared in the movie Sharknado 3: Oh Hell No! This is a 2015 movie. He was seen in the role of the Director of NASA.

A Movie on Weiner’s sexting scandal was also premiered in Access Theatre in 2013. It was directed by Jonathan Harper Schlieman, and it showed the entire media coverage of the Weiner’s scandal. He also made a cameo appearance in an episode of Alpha House.