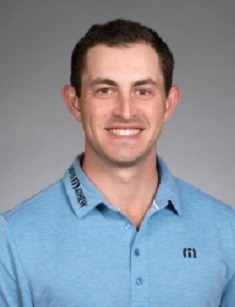 Patrick Cantlay is an American professional golfer who, according to the world rankings, is one of the best amateur players in the world. His life wasn't smooth: he had to get through a serious back injury and his friend's death but he didn't give up and keeps being a brilliant sportsman. So, let's know more about him!

Almost everyone in Cantlay's family plays golf. So, his grandfather, Big Pat, née Pat Neylan gave the boy love for this kind of sport. Besides Patrick, his mother Colleen Cantlay and dad have 3 more children: daughter Caroline, who plays golf at Cal Poly, son Nick playing on the Long Beach State Men’s Golf Team and the littlest son Jack.

When it came to choosing an educational establishment to study at, Patrick entered Servite High School. There he joined a golf team and became its head. The club's first match together was a nine-hole competition at Western Hills Country Club. Cantlay managed to defeat a senior from Long Beach Wilson and got the allowance to go to Loyola-Marymount.

In 2011 he entered University of California, Los Angeles. Already in his freshman year, he earned several titles and awards. So, he won the Haskins Award as the most outstanding college golfer in 2011, won the Phil Mickelson Award as the GCAA National Freshman of the Year, the Mark H. McCormack Medal. In the same year, Patrick was included in the list of the top amateurs in the world.

Patrick took part in the 2011 U.S. Open. He was among 5 best people to make the cut along. For example, besides him, Russell Henley and Brad Benjamin were selected. Rounds of 70 and 72 over the weekend ensured he was a low amateur player. His back nine 30 was the best in the tournament, and he finished in a tie for 21st.

The next week, on June 24, the player set a record: he shot the lowest amateur round in PGA Tour history.

Several days later, the player finished as the low amateur at the AT&T National. The next week, Patrick defeated the opposers playing in the Southern California Amateur at the San Gabriel Country Club.

Patrick Cantlay was a participant of the Western Amateur Championship and even got to the finals. Unfortunately, on August 6, in the final game, he was beaten by Ethan Tracy. The next match also brought him loss - in the final of the U.S. Amateur Kelly Kraft defeated the player. Cantlay was allowed to fight in the 2012 Masters Tournament – there he finished in a tie for 47th.

Cantlay performed as a representative of the United States at the 2011 Walker Cup.

In June 2012, Patrick Cantlay dropped out of college for the sake of becoming a professional. Because of this decision, he lost his spot at the 2012 Open Championship. So, his first professional match was at the 2012 Travelers Championship – there the player missed the cut.

Earlier Patrick had signed a contract with Mark Steinberg and Excel Sports Management Group (by the way, it is Tiger Woods's management).

The sportsman became one of the best professional players (besides his best amateur player title). So, he took the 415th place in the Official World Golf Ranking. Patrick managed to earn his first professional salary at AT&T National.

Patrick's first professional win was at the 2013 Colombia Championship, an event on the Web.com Tour. He got to the finals where he finished 11th and got a PGA Tour card for 2014. The player missed the majority of games because of back injury – so, he played only in 5 matches.

Interestingly, while having problems with his back, Patrick visited many doctors, and all of them had different solutions for the disease. The trauma even made Cantlay think about returning to college, but eventually, he decided not to give up.

In a recent interview, he said:

“I’d even considered going back to school, but I wasn’t finished with golf. I can’t imagine doing anything halfway. I thought, If I go back to school, I want to go back to school and only do school and get all A’s and spend my time making business connections so I can set up what I’m going to do after school. So I didn’t feel like I could do the physical therapy and get the kind of rest I needed to compete if I also had school going. Sure, there are 24 hours in a day, and yes, you can do multiple things. But not to do everything 100 percent.”

The sportsman had to undergo back surgery, later to go to the specialized medical gym, to take pills on a specific schedule and avoid excessive physical activities. He shared his thoughts with journalists:

“I found myself wondering if 75 percent was the best I would ever be, and what would that mean?” Cantlay said. “Then another nine months go by, and it was hard for me not to go see a different guy who says he can make me better in a week or two. The simple fact is this: Not knowing spent a lot of my mental energy. My progression back was very slow. I might hit 30 balls and then skip a day or two, but I had to be content to make small improvements and not go too fast. Being patient about my career wasn’t what I was thinking when I turned pro at 20, for sure. And it certainly didn’t get any easier when I was 23 or 24.”

In February 2016, Patrick's caddie, Chris Roth died in a hit-and-run accident in Newport Beach, California while Roth and Cantlay were in the countryside. The tragedy almost killed Patrick – Roth was his old mate, colleague, who always helped him in an amateur and professional career. The player even thought himself to be guilty in the accident. His current caddie is Mike Minister. Earlier he worked with Bae, Nick Price, Chris Smith, Joe Durant, David Eger, Chip Beck, Eric Compton, Jeff Sluman, and Chris Kirk.

Due to intense physical therapy and rehab, and a strong family support system, Cantlay eventually came back swinging to the PGA, and is high on the leaderboard in the 2019 Masters.

On November 5, 2017, Patrick Cantlay earned his PGA Tour card due to a second-place finish at the Valspar Championship.

On November 4, 2018, the player got the second place at the Shriners Hospitals for Children Open.

In 2019 Patrick took part at the WGC-Mexico where he scored the best result – hole-in-one.

Cantley's current net worth is evaluated at $17 million.

Patrick Cantlay has been a representative of the United States national team in different championships. So, in 2011 he played The Arnold Palmer Cup as an amateur for the U.S. Team. Also, in the same year, the sportsman took part in The Walker Cup representing America.

Patrick is thought to be single. Unlike other sports star, he prefers to keep his personal life in secret; he has never been noticed in a woman's social media profiles and in the news – what's why the world knows nothing about his dating history. Who knows, maybe he has a loved girlfriend who will soon become a wife, and he will introduce her to us?

The player has many career earnings. So, on November 5, 2017, he won Shriners Hospitals for Children Open Tournament. His next winning tournament also was in 2017 – it was called the Shriners Hospitals for Children Open where his opposers were Alex Čejka from Germany Kim Meen-whee from a South Korea. Earlier, in 2013 he became the winner of the Colombia Championship. His runner-up was Jim Renner, an American golfer.