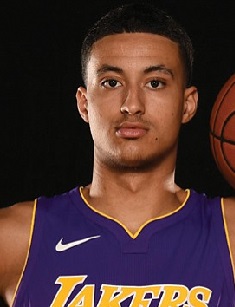 Kyle Kuzma is a professional basketball player for the Los Angeles Lakers. He was born on July 24th, 1995 in Flint, Michigan. His full name is Kyle Alexander Kuzma. He is considered as one of the rising stars in the Basketball field and has also been named the Western Conference Rookie of the month for the October/November game. Kyle Kuzma stands 6ft 9in tall and fits the description of any NBA forward. He has black eyes and black hair.

Kyle Kuzma is the son of Karri Kuzma. Karri was herself an athlete and played shot put in high school. She got pregnant with Kyle when she was studying at the Hillsdale College which she got admission on a track scholarship. The bond between Kyle and his mother is so strong because she ended her career and dreams to raise Kyle as a single parent when his father left his mother and got married to another woman.

Kyle has only met his father once, and he has never been in his life, so there is no mention of him. However, Kyle does have a stepfather named Larry Smith. Both Larry and Kyle have a harmonious relationship, and he also looks up to him as a father figure. Larry was the only person who put up a basketball rim in his living room when Kyle was two a couple of years old so that he could play. This is what ignited his passion towards basketball which he has made a successful career at.

Kyle Kuzma is biracial with an African-American ethnicity from his father whereas his mother’s ancestry is from the Ukraine, Germany, and England. His last name Kuzma belongs to the Slavic people and comes from Russian origin.

Kyle does not have any siblings from his real father, but he does have a half brother named Andre and a half-sister named Briana. Kyle does post pictures about his family on his social media, and he is pretty close to his mother. His mother is also seen cheering for him during his NBA games.

Kyle Kuzma was born and raised in Flint, Michigan. He went to the Swartz Creek Community Schools in the beginning, but later on, he transferred to Bentley High School in Michigan. He began his actual basketball career in high school only. In an interview, Kyle said that Flint is a violent place and there is a lot of temptation to get into the streets. However, he considers Basketball as his ‘safe heaven’ because it is the only thing that keeps him moving forward in life.

When Kyle Kuzma was in high school, he recorded himself while shooting at the YMCA and sent it to Vin Sparacio who was the then head coach at the Rise Academy, Philadelphia. The coach was impressed and immediately brought him in his team. He then went to the Rise Academy where he averaged seven rebounds and 22 points per game. His game was impressive, and he received many offers to play with many colleges including Iowa State, Connecticut, Missouri, and Tennessee. He finally chose the University of Utah.

Later on, he entered the 2017 NBA draft. He finally graduated with a degree in sociology from the University of Utah and made his career as a professional Basketball Player.

Kyle Kuzma has had a lot of achievements in his short career that is just developing. After playing for his college, he was drafted into the NBA. The team he got into was Brooklyn Nets. The same day, he was traded to the Los Angeles Lakers along with another player Brook Lopez in the exchange of Timofey Mozgov and D’Angelo Russell.

Again in November 2017, he played the match against Brooklyn and that match he scored 21 points and 13 rebounds. He played around 20 games, and in them, he has had an all team-high of 16.7 points per match. He consecutively scored double-double in two games that were held on November 3rd, 2017 and November 17, 2017. He was also given the title of the NBA All-Rookie First Team in 2018.

He is also the first ever rookie in the NBA history to get 330 points, 120 rebounds and 30 made three-pointers in a total of the 20 games that they played.

During the 2018 and 2019 season, he scores 37 points which are the season high against San Antonio Spurs. In another match in January, he scored 41 points against the Detroit Pistons which is the highest he has scored in his career. He was again picked for the Rising Stars game and scored the game’s high of 35 points. He was also given the MVP honor.

Up until now, he has played 147 games, and he has also been one of the most consistent players ever since he became part of the NBA. His career is on an all-time high right now.

He has been a part of two Rising Stars Challenges and has won MVP for one. He was awarded the NBA All-Rookie First team in 2018, and there are many more such awards to come his way.

Even though Kyle Kuzma is fairly loud on the basketball court, when asked about his personal life, he is often seen staying quiet. He prefers to keep his private life private, and this is the reason that there is not much information that has gotten out about his relationships. Whenever asked about his connections in the past, Kyle Kuzma has kept quite, but as of now, it is seen that this ace Basketball player is dating.

The name of his girlfriend is Katya Elise Henry, and they have been dating for a couple of months now. She became famous when she trolled Raelynn Inez on Instagram who is one of the Brandon Ingram’s girlfriends. She uploaded a post where she teased that Kyle Kuzma got her and her best friends the ticket in the 100s section whereas Raelynn was still stuck on the 200s.

Katye is an Instagram celebrity with over 5 million followers. She runs a fitness account and is known to date many other athletes in the past. Kyle Kuzma and Katye have been reportedly going on vacations, and she has been seen visiting his games whenever possible.

Kyle Kuzma is pretty active on his social media, and his Instagram account is regularly updated with his pictures and brand endorsements. In addition to this, he also uses Twitter and Snapchat. If you want information about his private life and games, you can definitely follow him on his social media accounts. However, in a recent interview, Kyle said that he is toning down on social media use and might ‘birdbox’ from social media for some time. This does mean that he will be posting less on social media sites, but you can still catch a glimpse of his life there.

Kyle Kuzma will be seen as the brand ambassador for GOAT which is one of the biggest marketplaces for buying sneakers. He also has a deal with Nike, and he will be seen in many Nike advertisements and posters in the future.

Kyle Kuzma is one of the most promising rookie players of the NBA, and we would like to see what games he brings forward in the years to come.

The salary of a Basketball player is not only the earning source, but there are also some other factors such as advertisements and other business ventures that the players indulge in. Kyle Kuzma has signed an endorsement deal with Nike which is one of the biggest sports company in the world. This means that his net worth has increased. He is currently the ninth best-paid player of the LA Lakers.

Kyle Kuzma also has a deal with GOAT which is one of the world’s largest marketplaces for sneakers. In addition to this, he has also signed a deal with Budweiser.

When it comes to his assets, he currently owns a Porsnche and drives a ’70 Cadillac DeVille. His net worth is estimated to be $5 million or more. He also has a two-year option to stay with the club, and with each consecutive year, his salary will increase. Also, it is seen that his brand endorsement deals are rising from time to time and hence in no time, his net worth will be higher than ever.