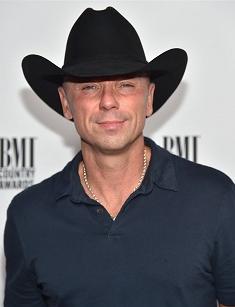 Kenneth Chesney is a popular American country music singer. He also writes songs, and is known worldwide as a record producer. Kenneth has produced more than 40 Top 10 singles, which made him one of the most successful country artists.

The singer was born in Knoxville, Tennessee, the U.S.

During his school years, Kenneth had interest in music and taught himself to play his first guitar, which he got for Christmas.

In 1989, Kenneth recorded a self-released demo album. He decided to use the earned money to buy a new guitar for himself. In 1990, he finished University and moved to Nashville to start a career as a singer.

Between 1996 and 1999, the singer issued several hit songs, which made him a famous performer among other country singers. His songs got colossal popularity, and Kenneth gained recognition through the country.

In 2001, the singer presented his first Greatest Hits album. Next year, he went on a successful tour.

Later he put out two new albums in 2005. Both recordings were smash hits and took top positions in the country music charts. The singer had real success in his music career that year, although he had some problems in his personal life.

In 2006, Kenneth made a concert album, Live: Live Those Songs Again. The album was recognized as his other successful work and took first places in music charts.

In 2007, the musician contributed to the album Just Who I Am: Poets & Pirates. The song "Don't Blink" had positive reviews and became a hit.

Chesney went on tour with his best songs during the summer of 2008 to support Just Who I Am: Poets & Pirates. It was a great tour with amazing shows.

In 2011, Kenneth recorded a song called "Live a Little". It was written by David Lee Murphy and Shane Minor. The song reached number one on the US Billboard Hot Country Songs chart in May 2011. Chesney told the Nashville Music Scene that this song defines him as a person. Co-writer David Lee Murphy told in the interview that the two were just sitting around and Minor said he had a good idea for a song called "live a little, love a lot."

In 2012, the song Come Over was put out. It was written by Sam Hunt, Shane McAnally, and Josh Osborne. It was released in May 2012 as the second single from Chesney's 2012 album "Welcome to the Fishbowl".

The singer has a fan club that is called "No Shoes Nation". For a select few members of his fan club Chesney is giving them a 9-pound coffee and a table book called "Living In Fast Forward." The singer is releasing a limited number of signed books only for his fan club members.

In 2014, the musician sang his next popular song "American Kids". He heard the tune during a writers' retreat with McAnally, and according to Chesney:

"It was unlike anything I'd ever heard... it just grabs you and holds on, but even more importantly, it feels really good." The singer also added that "American kids are so much more complicated, more fun, more real".

In 2017, the singer gave a great live concert at the Gillette Stadium in Boston, the U.S. He said that this city means a lot to him. He adores its soul, people, and atmosphere.

In 2018 the song "Better Boat" featuring Mindy Smith was released. Kenneth took inspiration from Hurricane Irma's aftermath when recording his album Songs for the Saints. In a press release, he said that he felt that "Better Boat" "really captures the emotion of that moment". Its lyrics are about finding positivity in life struggles, and are centered around a metaphor of building a "better boat" to navigate the sea.

In July, 2019 Kenny Chesney and Ed Sheeran gathered together for the very first time and wrote "Tip of My Tongue," the country hitmaker's next single. Kenneth said that the song is about the story of his life, and about connection.

The celebrity is giving concerts in 2020; shows start in the spring and will be held in the USA. The tickets are available on the official website of the singer: https://www.kennychesney.com.

The celebrity has made many collaborations with other popular music stars. In 2004, Kenneth sang with one of his personal heroes, Jimmy Buffett, on a remake of Hank Williams' single "Hey Good Lookin', and a second song "License To Chill". He also worked with Tim McGraw; they contributed to a version of Tracy Lawrence's single "Find Out Who Your Friends Are". In 2007, Kenneth sang with Neil Thrasher and Wendell Mobley. The same year, Kenneth Chesney was happy to sing in a duet with an American country singer, Reba McEntire.

Kenneth Chesney was married to the actress Renée Zellweger. They had a wedding ceremony in 2005. According to their words, they had met each other at a tsunami relief event. However, their marriage didn't last long. They broke up at the end of 2005.

After the divorce, the singer spoke out about his relationship with ex-wife. He admitted the fact that it was a failure. The musician said that he thought he knew a lot about the relationships but later he realized he didn't. He understood that it would be better for him to be single.

In 2017, the singer took part in helping the victims of Hurricane Irma. Kenneth has a mansion on St. John in the U.S. Virgin Islands. He offered a place to many people who then stayed to weather the storm. The singer is also engaged in charity work, he made a charitable fund. It was founded to help victims of the storm.

An interesting fact is that the singer has his own alcohol drink: rum that is called Blue Chair Bay Rum. There is a recipe for the cocktail with rum on the Internet, so everyone can try to make a refreshing drink.

The net worth of the country singer is estimated at $190 million. He earns mainly from his albums and concerts. Sometimes he appears in advertisements and TV commercials. For example, in 2015, he was offered to film in Apple music commercial as he is a successful country star for whom music is everything in life.