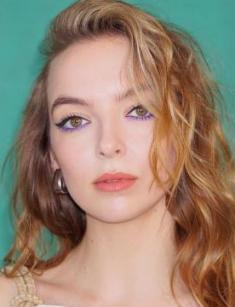 Jodie Comer is a young rising star, impressive drama actress, and a social activist. The English girl came to the TV screen right from the supermarket Tesco, where she worked as a cashier. Today, journalists and critics admire her diverse characters and the ability to reflect hidden emotions, showing empathy to anyone, even a cruel murderer.

The would-be actress was born on March 11, 1993, in Liverpool. The girl’s parents, James and Donna, were entrepreneurs and had two kids: Jodie and Charlie.

The young talent participated in school performances and took dance and acting lessons; her drama teacher was the first to recognize her abilities and invited her to a contest for young actors. Jodie won and participated in a radio show on the BBC. The channel directors were astonished by the school student’s gift and recommended the parents to go to an agency.

In 2008, Comer began to play minor roles in series; she was also an actress of the Yorkshire Theatre for the whole season.

In 2013, the teenage series My Mad Fat Diary brought the artist first fans. She personified the friend of the main character (Sharon Rooney); the project also starred Nico Mirallegro. The next year, Jodie had a bright part in the mystic drama Remember Me; the audience appreciated the duet of Michael Palin and the young actress.

Comer’s talent was flourishing more and more with every project. The role of the Russian killer Villanelle in Killing Eve brought the Female First Awards for Television Actress of the Year; her colleague, Sandra Oh, was nominated for the same prize for the part of Eve Polastri, but critics preferred to give the title to Comer.

The 2016 series Thirteen was marked with the role of Ivy; Jodie’s dramatic talent was sparkling there. The same year, the woman collaborated with Nico Mirallegro in Rillington Place: her character was the victim of the maniac. Mirallegro personified her husband executed because somebody reported on him. The historical series The White Princess (2017) also proved the actress’s mastery. Besides, the audience appreciated the harmonious figures of Elizabeth of York and Henry VII (Jacob Collins-Levy).

Doctor Foster, Snatches: Moments From Women’s Lives, and Inspector George Gently are among the artist’s recent works as well.

Jodie Comer does not talk about her personal life and only cracks jokes in her interviews:

“I wanted people to be scared of her. But when I am introduced to men sometimes, they are a little bit hesitant, and yes, maybe, they can be a bit frightened”.

The actress has not left her home city, Liverpool, and continues to live with her parents. One can see many photos with Jodie’s brother, Charlie, on her Instagram; their relationship is warm and friendly. Comer often takes his present, a bracelet with a Buddhist symbol, as a talisman that helps her during auditions.

The artist was going to star in the movie Death on the Nile scheduled for the end of 2020 but revealed in spring 2019 she left the project. Today, Jodie continues to work on Killing Eve. The sci-fi comedy Free Guy by Shawn Levy is expected in 2020; Comer will collaborate with Ryan Reynolds.

Popular magazines, such as Elle and GQ, frequently publish the actress’s pictures. She does not need to have a photoshoot in a swimsuit to increase her ratings; those photos have a different idea.