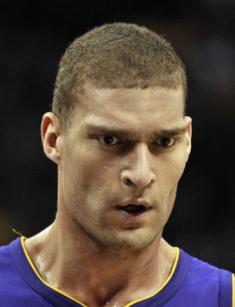 Born in North Hollywood, Brook Lopez started a basketball career in NBA in 2008 as a rookie of New Jersey Nets (current Brooklyn Nets). He was drafted after only two seasons in college with the 10th overall pick. Over the years, the center was playing for Nets in 2008 – 2017, for Lakers in 2017 – 2018, and joined Bucks in 2018. So, he has established himself as a veteran of the league, who has played over 700 games, starting almost all of them. In 2019, his twin brother, Robin Lopez, joined Brook in Milwaukee Bucks. Brook’s net worth is estimated at $23 million, including all of his properties and earnings.

The birthplace of Brook was North Hollywood. He was born to his Cuban father, Heriberto, and mom, Deborah, along with his twin brother Robin on April 1, 1988. The twins became the third and the fourth children in a family. There also were two elder boys, Chris and Alex.

Brook was lucky to grow up in a sports family, as his grandfather and two of his siblings played basketball. So, from an early age, Brook was inspired to be like his brothers and started playing the game too. Soon, the Lopez’s family moved to Fresno, where he entered San Joaquin Memorial High School.

The giant brothers led their school team to the top places in the state tournament, and Brook stood out for his skills more than Robin. Despite that, both received invitations to continue education at Leland Stanford Junior University. In 2005 they committed, becoming the second twins in the history of Cardinals.

Brook made a terrific start in a college career. In his freshman season, he started 18 of 26 games, scoring 12.6 points, 6.0 rebounds and 1.7 blocks on the average per game. Brook made 45 blocks in a season and was the second Cardinal after his brother with such a high number. The twins blocked more shots than seven Pacific-10 teams. Thanks to those stats, Brook became a third-team All-American and a first-team Pac-10 selection.

The season of 2007 – 2008 became more successful for Brook. He became the main player and started 25 of 27 games, playing 30+ minutes per game. Improved the number of scored points, he led the Cardinal in scoring (19.3 points per game) and rebounding (8.2), added 56 block shots. He scored the game-winning basket with 1.3 seconds left in an 82-81 victory over Marquette in the second round of the NCAA tournament to put Stanford in the regional semifinals for the first time since 2001.

Although Brook’s outstanding playing didn’t lead the Cardinals to the NCAA finals, he was included in the list of All-PAC-10 best players of the year. On March 31, 2008, the Lopez twins declared for NBA Draft. The announcement came through their parents. It was expected that Brook would declare himself eligible for the NBA, but Robin was not so certain. Brook hired an agent and thus forwent his remaining two years of college eligibility.

"After a great deal of thought and discussion with my family, I feel it is the appropriate time to enter the NBA draft," Brook Lopez said. "It is the dream of every basketball player to play and succeed in the NBA, and I feel I am ready to take on this new challenge."

Brook was considered to be the more well-known of the twins and was projected to go in the top five of the draft and was working out only for Minnesota (third pick) and Seattle (fourth). His draft profile reported:

“A big athletic center that rebounds and blocks shots well using his upper body strength to position himself well. Is developing a low post game and already shows a variety of basic moves around the basket, with the ability to step out and hit the 18 footer. Needs to work on his lower body strength, which will help improve his explosiveness around the basket at both ends.”

On June 26, 2008, Brook became the 10th Draft number and was selected by New Jersey Nets. Six days later, he signed his first professional two year $4.35 million contract. Brook debuted in a game against Washington Wizards, where he scored eight points and eight rebounds. Soon, the Nets’ starting center took an injury, and Brook entrenched in the main roster. Lopez appeared in all games of the season and became the fourth among NBA players in total blocks.

Apart from playing in NBA All-Star Rookie Game, Lopez became the third-best rookie of the 2008-2009 season and was named to All-Rookie selection. The Nets failed next season, showing one of the worst seasons in NBA history. The things went better in 2010-2011, and that was the third season when Lopez appeared in all season games. That year the head coach criticized Brook a lot for his manner of rebounding.

The player spent only five games in season 2011-2012, as one injury followed by another. However, the renamed Brooklyn Nets extended a player for a new four year $60.8 million deal. Brook returned after the injuries and began showing his best skills, scoring 20+ points in seven games in a row. In January, he was named to All-Star roster, and soon he led the Nets to the playoff first time in his career. The team lost in the first round.

The last year of Brook’s career as a Nets’ player was the season 2016-2017 when he reached 20.5 points, 5.4 rebounds, and 1.7 blocks per game. On the eve of the season’s beginning, Lopez began playing a three-point shooter and became the franchise’s leading scorer and blocker that year. After making just three three-pointers in his first eight seasons, the Stanford product made 246 three-pointers over the last two seasons combined, shooting 34.6 percent from beyond the arc in those two seasons.

In June 2017, the Nets traded Lopez to Los Angeles Lakers. That season he started 72 games, scoring only 13.0 points and 4.0 rebounds rep game. On July 17, 2018, a ten-year NBA veteran changed his jersey again and signed a one year $3.38 million contract with Milwaukee Bucks. Then their General Manager:

“Brook is a proven NBA center who bolsters our front line with his size and skill set. He has demonstrated the ability to stretch the floor on offense, as well as anchor the defensive end of the court. He’s a great teammate, and we know he will be a positive addition to our roster both on and off the court.”

On November 11, 2018, Brook wrote his name to the NBA records book. Then he finished a career night, connecting on 8 of 13 three-pointers, including 6 of 7 in the third quarter to help the Bucks to an impressive 121-114 win over the Denver Nuggets. Some players half-jokingly put Lopez in the same category as Warriors "Splash Brothers" Stephen Curry and Klay Thompson, two players who were among the best three-point shooters in NBA history.

As a proud member of the Bucks, Lopez couldn’t be one of the Splash Brothers. That’s why the Internet found a new nickname for Milwaukee's three-point bomber, “Splash Mountain.” In March 2019, Brook Lopez exacted some revenge over his former team, Lakers. He scored 28 points, matching his season-high.

The Lakers were one of many organizations that likely regretted not signing Lopez to an affordable deal the recent summer, as the Stanford product was ranked No. 13 in the league in made three-pointers (167) and second in total blocks (161). After Brook started 81 season games, he led the team to the NBA playoffs. Spent 15 games, the Bucks were beaten by future champions Toronto Raptors. Brook scored 11.2 points and 5.5 rebounds per game.

In summer 2019, Lopez stayed a potential fantasy free agent. And in July, the veteran signed a four year $52 million contract with Bucks, including $52 million guaranteed, and an annual average salary of $13 million. At the same time, his brother, Robin Lopez, joined the Bucks, and Stanford twins reunited again.

Brook’s favorite movie is Star Wars: Episode VI – Return of the Jedi. And his hidden off-court talent is that he is a karaoke superstar. Brook Lopez is private when it comes to sharing the details of his dating affairs. Most likely, he is not engaged to anyone.