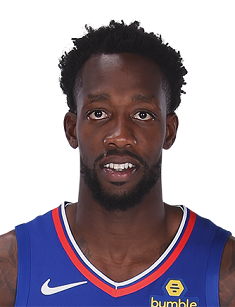 The Illinois native, Patrick Beverley started a basketball career in Ukraine as a player of BC Dnipro in 2008. Spent several seasons in Europe, Patrick got into NBA in 2012, signing a contract with Houston Rockets. Beverley was playing for Dnipro (Ukraine), Olympiacos (Greece), Spartak (Russia), Rockets and Clippers.

He represents the national team of the USA but didn’t win any awards. He plays at a shooting guard and point guard positions. Patrick’s net worth is roughly estimated at $12 million. He was previously signed with a four-year contract on $23 million with Rockets. Current Clippers’ player has an average salary of about $5 million annually.

The birthplace of Beverley was Chicago. Born on July 12, 1988, Patrick was brought up by his mother Lisa and his maternal granddad, Rhys Morris. As a kid, Patrick tried different actions. He played football, baseball, and basketball. Only at the age of 12, he figured out what he wanted to do with his life and started working towards it. Patrick dreamed of being a professional NBA player.

Initially, Partick studied at High School of Aurora, Illinois, but soon he attended Marshall High School. He immediately got into the school team. He came up with an eye-opening way of introducing himself to the world of high school basketball.

The Marshall guard started hitting shots from every conceivable distance and angle. In back-to-back games he scored 45 points against Corliss and 45 against Manley, highlighting a month in which he also lit up Carver for 40 points. Patrick was the state total points leader. He became the best player of the year and caught the attention of the University of Arkansas in Fayetteville.

The story of Beverley’s serious basketball career started in the Arkansas Razorbacks basketball team in 2006. He became the best young player in his rookie season, leading Razorbacks in a number of points, steals, and rebounds. Patrick won SEC individual awards.

Beverley played two seasons with the Razorbacks but was suspended in August 2008 because of the academic reasons. Patrick was forced to choose between two options – stay out his one-year suspension and then return to Arkansas as a junior or play elsewhere and earn money from it. He left Arkansas and moved to Ukraine.

In 2008 Patrick signed with BC Dnipro one-year contract. In Dnipro, Patrick participated in UBL All-Star game and won slam-dunk contest. As his contract came with a clause that stipulated he could leave after the season, Patrick decided to take advantage of the 2009 NBA Draft. He automatically entered it. LA Lakers selected him by 42nd number, but a day later traded rights to him to Miami Heat.

Not taking the chance to appear in the NBA, Patrick decided to move to Greece and join Olympiacos B.C. He won the national cup and played in EuroLeague Final. His stats were low. He scored only 3 points per game.

In August 2010 the Heat signed with Beverley, who was its member for Summer League. But Beverley faced long odds with making the final roster with Mario Chalmers, Carlos Arroyo, Kenny Hasbrouck, and Eddie House. He appeared in six preseason games, but Miami canceled the agreement in October. Patrick went to Europe again.

Beverley appeared in PBL League in 2011. He signed with St. Petersburg team a-one- year deal, which was later extended. He became the best player of EuroCup 2012 and didn’t want to stay with Spartak for the next season. However, Patrick’s contract allowed him to move away in case if he received an offer from the NBA team. In December 2012 he moved to Houston, where started his NBA career.

Signing multi-year deal with Beverley, Rockets hoped they got a reliable player. However, Patrick missed a large part of his NBA career because of injuries. He spent several games in the development league in his debut season, made some career highs with 16 points and 12 rebounds. Patrick appeared in 55 regular games.

In 2014 Beverley was included in the list of the second best defensive players team, spent 56 games, according to basketball reference. He took part in All-Star Weekend and won a Skill Challenge Award. The best year of Beverley’s career was season 2016-2017 when he was included in the roster of All-Defensive Team and scored 26 points in one game. It was his career high.

Beverley was traded to Clippers in exchange for Chris Paul in summer 2017. He missed almost all games of his debut season in LA because of various injuries. In 2018 – 2019 Beverley started improving that he was rightfully called one of the best defensive players during his Rockets career. After the Clippers’ miraculous win over the Golden State Warriors in Game 2, which saw them make the biggest comeback in NBA playoffs history, Patrick Beverley was being championed as the Man Who Can Stop Kevin Durant.

Durant had been ejected from Game 1 following an altercation with Beverley and then fouled out in a Game 2 performance which only saw him take eight shots, and hadn’t been himself. Beverley, who is eight inches shorter than Durant, was doing the impossible. Everyone loved it. Everyone made a big old deal out of it. However, the Clippers lost the round in six games

KD dropped 95 points in two games on the Clippers and scored a playoff career-high 50 points in the last game. There was simply nothing that Patrick Beverley or any other Clippers defender could do to stop Durant from his onslaught. During the post-game interview, Beverley and Lou Williams admitted that they tried everything possible to stop the two-time Finals MVP.

Beverley has always kept his personal life in secret. The only was known that he engaged his girlfriend, Amber Spencer in 2014. He started dating her soon after he broke up with his ex-girlfriend, Lira Galore. According to several sources, Patrick has two children, a son Everett and a daughter Adlaia. Their mother’s name is still unknown.

Patrick Beverley so far has made earnings of $26 million from his entire NBA career. Kept aside Patrick Beverley financial earnings, his assets include a House in Houston, Texas and a big budget classic car.