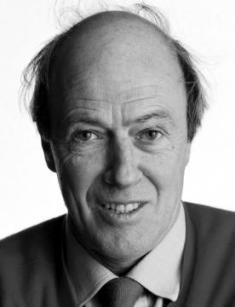 The life of this British writer is like a fascinating novel. He had everything in his life: a difficult childhood, bullying in school, research of the exotic continent, war and heroic deeds, marriage to the Oscar-winning star of Hollywood. Roald Dahl could write a magnificent memoir but he began to write detective stories, fantasy novels and children's works. Such books as "The Gremlins", "Charlie and the Chocolate Factory" made him a world celebrity.

The boy named Roald was born in the Welsh town of Llandaff (near Cardiff) on September 13, 1916. His Norwegian parents gave their son a name in honor of the famous compatriot, the polar explorer Roald Amundsen. His father Harald Dahl moved to England in the late 1880s, his mother Sofie Magdalene moved to England much later. But she married a countryman immediately after her arrival, who was 28 years older than she.

Four children were born in their marriage: a son and three daughters, one after another. The family was left without a head of the family early: the father died of pneumonia at the age of 57. Sofie gave birth to her another daughter Asta but she lost her older daughter Astri, the girl died of appendicitis.

Young Roald adored his mother. She was a great storyteller. The children listened to her stories about Norwegian monsters and trolls with pleasure. Perhaps it was the basis of the talented storyteller, who had amazing results in his future.

"The rock, the real rock... She was always on your side, whatever you do," Roald thought of his mother.

The boy entered the Cathedral School, Llandaff at the age of 7, where he learned the inhuman rules that were in the closed educational institutions of England. Then Sofie sent her son to the boarding school in England, St Peter's in Weston-super-Mare. But it was not better here, Roald wrote letters to his mothers, which were full of sadness. The wise woman preserved the epistolary experiences of her son and the autobiographical book "Boy – Tales of Childhood" (1984), which was released, based on them.

Sofie and the children moved to Kent and Dahl began to study there when the boy was 13 years old. It was difficult for a boy to study here; there was bullying, corporal punishment in this institution. The young man did not like to study but (the guy grew up to 6,5 feet (198 cm)), he succeeded in sports disciplines due to his high growth.

There was another pleasant circumstance at Repton School: chocolate was brought for students for tasting from the Cadbury chocolate company from time to time. Young Roald loved this treat and wanted to invent new recipes. It is easy to guess that this fact of his biography became a basis of the bestseller "Charlie and the Chocolate Factory" of Roald Dahl.

The guy refused to go to university, after graduating from college in 1934. And he went to Newfoundland as a photographer. He became interested in this business at school. And he went to Africa (Tanzania), joining the Shell Petroleum Company.

Dahl wrote and published his first story in Africa. And then there was the war. Roald went to serve as a volunteer in the Royal Air Force, learned to fly a military aircraft. But his first flight was tragic in 1940: an emergency landing cost him his vision and a broken skull. The guy recovered for a long time and participated in the battles over Greece, Libya, Syria a year later.

In 1942, the pilot was commissioned as a pilot officer in Washington, where he began his career as a writer.

The first literary experiences of the British storyteller were stories about everyday life in the military. Later, they were included in the book ("Over to You," 1946). A story about mythical creatures: gremlins, which are harmful to pilots and damage their aircraft, was included in this book too. So, there was Dahl`s first work for children. Such famous book as "The Gremlins" was filmed only in 1984.

In 1945, the storyteller returned home and lived with his mother after the war. He focused on the novel. The stories of this period are collected in the series "Claud, Clauds Dog" and they were released in 1953. Dahl received the prestigious Edgar Allan Poe Award for his original style a year later, which mixed "a grotesque imagination and a cruel sense of humor."

He again became the winner of the award after five years. Then Dahl was no longer a beginner in literature but a recognized master of black humor, whose works are translated into dozens of languages. Then the storyteller tried his hand in a new role, writing the script for the movie "You Only Live Twice" for the book of his friend, Ian Fleming, whom he met while living in America. In total, Dahl created more than 20 movie and television scripts.

In the 1960s, the writer succeeded in the field of children's works. He was a family man and a father of many children at that time. And his work was created for young readers. In 1961, he published his first book "James and the Giant Peach" and the author did not intend to publish it but his family persuaded him to take the manuscript to a publishing house. He was so happy to have success.

In 1964, the novel "Charlie and the Chocolate Factory " was released and then such books as "Charlie and the Great Glass Elevator" (1972), "Danny the Champion of the World" (1975), "The BFG" (1982), "The Witches" (1983), "Matilda" (1988) were released. All children's books of the writer are illustrated by the English artist, Quentin Blake, who found the special style, corresponding to the spirit of creations of the master.

The author worked in his favorite hut in the backyard of a country house. He loved to live in nature: he was fond of breeding animals, cultivating the garden. Everything was always ready for creativity and inspiration in his hut: a ball of candy wrappers, a favorite chair, six sharpened yellow pencils with an elastic band at the end, yellow notebooks from the United States.

Dahl's children's works are a unique world, in which the author speaks to the child in his language through funny puns and funny neologisms. There is a place for a sharp plot and grotesque, drama and even a sad ending in his books but pure child's mind always wins against the tyranny of adults.

In the early 1950s, Dahl moved to New York, where he worked and published his works. Dahl met his future wife, a Hollywood rising star Patricia Neal at one of the parties. In 1953, they married, they had five children. Their firstborn was a daughter Olivia Twenty (1955), then they had a son Theo Matthew (1960), Ophelia Magdalena (1964) and a baby Lucy Neal (1965).

Patricia starred a lot; the actress received the Oscars in 1964. So, the father spent a lot of time with children. In December 1960, a tragedy occurred: Theo's stroller was hit by a taxi.

The baby had hydrocephalus. Dahl took part in the development of a special valve to reduce intracranial pressure to make the life of his child easier. It helped thousands of sick children.

Roald and Patricia divorced in 1983. Dahl married Felicity d'Abreu soon, with whom he lived for the rest of his life.

The storyteller died of a blood disease on November 23, 1990, in Oxfordshire, England. Roald Dahl had a net worth of $10 million.

The storyteller wanted to be buried with his snooker cues, some perfect burgundy, chocolates, HB pencils and a power saw.

The Roald Dahl Children's Gallery was opened at the Buckinghamshire County Museum in nearby Aylesbury.

In 2016, The Oxford Roald Dahl Dictionary was published, which included 8000 words. And there is the word "dahlesque," denoting the author's style of the famous British writer.

In 2000, Dahl became "the favorite author in Britain."

"Is it really important who you are and what you look like if you're loved?!"

"If someone smiles at you and his eyes don't change, don't believe that person. He's pretending."

"Parents are strange people. Even if their child is the most disgusting creature in the world, they still claim that he is the best child."

"Art is immoral only when amateurs practice it."

"Women are as incomprehensible as the ocean. Until you drop the lot, you will not know what you have under the keel, depth or shallow."