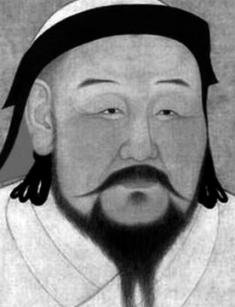 The commander, known to us as Genghis Khan was born in Khentii Mountains, Khamag Mongol in 1155 or 1162 (according to different sources). The real name of this man is Temüjin. He was born in Delüün Boldog, near the mountain Burkhan Khaldun. Yesugei Baghatur, the head of the ruling Mongol clan, became his father, and Hoelun became his mother. It is noteworthy that Hoelun was betrothed to another man, but Yesugei Baghatur won the heart of his beloved and became her lawful husband.

Temüjin got his name in honor of a Tatar Temüjin-Uge. Yesugei defeated this leader shortly before his son uttered his first cry.

Temujin lost his father early enough. At the age of nine, he was married to an eleven-year-old Börte Üjin Khatun of another tribe. Yesugei decided to leave his son in the bride's house until they both were of age because he wanted the future spouses to get to know each other well. On the way back, Genghis Khan's father stayed in the Tatar camping place, where he was poisoned. Three days later, Yesugei died.

After that, for Temujin, his mother, the second wife of Yesugei, as well as for the brothers of the future great commander, came dark times. The head of the clan drove the family from their usual place and took away all the cattle belonging to it. For several years, widows and their sons had to live in absolute poverty and wander the steppes.

Sometime later, the leader of Tayichiuds, who kicked out the family of Temujin and declared himself the owner of all conquered land of Yesugei, began to fear of vengeance that could come from the grown-up son of Yesugei. He sent an armed group to the family camp. The guy ran away, but soon he was caught up, captured and placed in a wooden block in which he could neither drink nor eat.

Genghis Khan was saved by his own ingenuity and the intercession of several representatives of another tribe. One night he managed to escape and hide in the lake, going deep into the water. Then several residents hid Temujin in a wool cart and then gave him a mare and weapons so that he could get home. Sometime after his successful release, the young warrior married Borte.

Temujin, as the son of a ruler, sought power. At first, he needed support, and he turned to Khan of the Keraites, Toghrul. He was a sworn brother of Yesugei and agreed to become his ally. Thus began the story that led Temujin to the name of Genghis Khan. He raided neighboring settlements, multiplying his possessions and, oddly enough, his army. Other Mongols sought to kill as many enemies as possible during the battles. Temujin, on the other hand, sought to keep as many warriors alive as possible to lure them to him.

The first major battle of the young commander took place against the Merkits, the tribe that was in alliance with all the same Tayichiuds. They even kidnapped the wife of Temujin, but he, along with Toghrul and another ally, Jamukha, from another tribe – defeated enemies and returned to his wife. After the glorious victory Toghrul decided to return to his own tribe, and Temujin and Jamukha, having become blood brothers, remained in one tribe. At the same time, Temujin was more popular, and Jamukha eventually began to dislike him.

He was looking for a reason for an open quarrel with his brother and found it. Jamukha's younger brother was killed when he tried to steal Temujin's horses. Allegedly for the purpose of revenge, Jamukha attacked the opponent with the army, and in the first battle, he won a victory. But Genghis Khan's story would not attract so much attention if he could be so easily broken. He quickly recovered from defeat, and his mind began to be occupied by new wars: along with Toghrul he defeated the Tatars and received not only excellent trophies but the honorary title of military Commissioner (j'aut quri).

Then followed other successful and unsuccessful trips and battles with Jamukha, as well as with the leader of another tribe, Van Khan. Van Khan did not actually mind Temujin. However, he was an ally of Jamukha, and so he had to act accordingly.

On the eve of the decisive battle with the joint forces of Jamukha and Van Khan in 1202, the commander independently made another raid on the Tatars. At the same time, he again decided to act not as it was common to carry out conquests in those days. Temujin said that during the battle his Mongols should not capture the loot, because all of it would be divided between them only after the battle. In this battle, the future great ruler won, and then ordered to execute all the Tatars as retribution for the Mongols, whom they killed. Only small children were left alive.

In 1203, Temujin met face to face with Jamukha and van Khan again. At first, the Ulus of the future Genghis Khan suffered losses, but because of the injury of Van Khan's son, the opponents retreated. In order to divide his enemies, during this forced pause, Temujin sent them diplomatic messages. At the same time, several tribes United to fight against both Temujin and Van Khan. The latter defeated them first and began to celebrate the glorious victory: it was then that Temujin's troops caught him by surprise.

Jamukha remained only with a part of the army and decided to cooperate with another leader, Tayan Khan. The latter wanted to fight with Temujin, as at that time only he seemed to be a dangerous opponent in a desperate struggle for absolute power in the steppes of Mongolia. The victory in the battle, held in 1204, was won again by the army of Temujin, who demonstrated himself as a gifted commander.

In 1206, Temujin received the title of Great Khan over all the Mongol tribes and adopted the well-known name of Genghis, which translates as "ruler of all." It is evident that his role in the history of the Mongolian steppes was huge, as well as his army, and no one else dared to challenge him. It was good for Mongolia: before his era, local tribes were always at war with each other and raided neighboring settlements. After Temujin came to power, the land became a full-fledged united state. Back in the days, the Mongolian nation was associated with fights and blood loss, and then - with unity and power.

Genghis Khan wanted to leave behind a worthy legacy not only as a conqueror but also as a wise ruler. He introduced his law, which, among other things, spoke of mutual aid during the military campaign and forbade deceiving trust. These moral principles had to be strictly observed. Otherwise, the offender could expect execution. The commander mixed up various tribes and peoples, and whatever tribe the family belonged to before, its adult men were considered warriors of Genghis Khan's army.

Numerous films and books have been written about Genghis Khan not only because he brought order to the lands of his people. He is also widely known for successful conquests of neighboring lands. Thus, in the period from 1207 to 1211, his army subordinated almost all the peoples of Siberia to the great ruler and forced them to pay tribute to Genghis Khan. The commander was not going to stop there: he wanted to conquer China.

In 1213, he invaded the Chinese state of Jin, establishing power over the local province of Liaodong. Throughout the journey of Genghis Khan and his army, Chinese troops surrendered to him without a fight, and some even went to his side. By the autumn of 1213, the Mongol ruler had strengthened his position along the entire Great Wall of China. Then he sent three powerful armies, led by his sons and brothers, to different regions of the Jin Empire. Some settlements surrendered to him almost immediately, others – fought until 1235. However, in the end, the whole of China at that time was conquered by the Tatar-Mongol Yoke.

Even China could not force Genghis Khan to stop his invasion. Having achieved success in battles with the nearest neighbors, he became interested in Central Asia and, especially, fertile Seven Rivers. In 1213, the ruler of this region was the fugitive Naiman Khan Kuchlug, who made a political miscalculation, starting the persecution of the followers of Islam. As a result, the rulers of several sedentary tribes of Seven Rivers voluntarily announced that they agreed to be subjects of Genghis Khan. Subsequently, Mongolian troops conquered other regions of Seven Rivers, allowing Muslims to perform their services and, thereby, arousing support among the local population.

The conqueror died shortly before the capitulation of Zhongxing – the capital of one of those Chinese settlements, which tried to resist the Mongol army. Different sources name different reasons for Genghis Khan's death: he fell off his horse and suddenly fell ill because he could not adapt to the harsh climate of another country. It is still a mystery where his remains lie now.

Numerous descendants of Genghis Khan, his brothers, children, and grandchildren tried to preserve and multiply his conquests and became major statesmen of Mongolia. So, his grandson Batu Khan became the senior among the descendants of the second generation after the death of his grandfather. There were three women in Genghis Khan's life: previously mentioned Börte Üjin Khatun, his second wife Khulan Khatun and the third wife, a Tatar, Yesugen Khatun. In total, they gave birth to sixteen children.