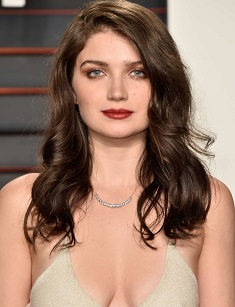 Eve Hewson is a famous actress from Northern Ireland who got popularity mostly due to playing in the film The Knick and Robin Hood. Even though her father was a famous music star, Eve didn’t take advantage of it and reached the success herself. Let’s know more about Eve’s life!

Eve’s name is symbolic. She was born at 7 am on 7 July, as "eve" is the middle of the word "seven." Future movie star passed her childhood in Dublin. Her parents strived to develop her personality fully: so, she took French lessons, got musical education, visited tennis classes. However, she was a tomboy, and the dad sometimes called her male name Elliot.

Meanwhile, from the infancy, the girl dreamt about movie career. In her future admissions, she said that she had danced in front of TV-screens trying to look like stars.

Eve’s parents were wise: they supported kids in everything, encouraged to take up new hobbies and interests. At the same time, they were strict and didn't spoil the children. When Eve said them she was going to become an actress, they were astonished but didn’t try to stop her.

Hewson once claimed that she wanted to dispel the myth about famous people’ children. Philistines usually suppose them to do everything, without focusing on something (like Kylie Jenner who is singer and actress, and owner of the line of cosmetics and clothes). In response to it, Eve concentrated on her actress career.

Having graduated from the Dalkey School Project, the girl entered St. Andrew's College in Dublin. Later she studied at New York University. In pursuit of her dream to become an actress, she moved to New York with family.

Hewson played her first role at the age of 14: she acted in the film Lost and Found with her sister. Eve’s first serious project was in 2008 – she played in the drama The 27 Club. The movie is about a young singer who committed suicide when he was 27 like Kurt Donald Cobain, Jimi Hendrix, Jim Morrison, and others.

In 2010 the young star took part in a music video of the group The Script for the song “For The First Time.” The same year, Hewson got a role in the movie This Must Be the Place with Sean Justin Penn. The work would subsequently get many awards. Hewson starred in the thriller film Blood Ties (2013) and the romantic comedy film Enough Said (2013) as the daughter of James Gandolfini's character Albert.

In 2013 Eve graduated from the New York Film Academy. Later she succeeded to get a central role of Lucy in the TV series The Knick. Her character is a young nurse who has to get acquainted with the hospital. Interestingly, she has a fear of blood. Playing in the Blood Ties, she saw many bloody scenes, but acting in The Knick was especially difficult for her: the film was named one of the most realistic works.

When the series appeared on screens, the girl met another success: she was lucky to work with Steven Allan Spielberg in the movie Bridge of Spies – it is a drama about the Cold War. Her character is the daughter of the main character, played by Tom Hanks. Due to Hewson, the film got many fans.

In 2015 Eve was invited to a photo shoot for the October issue wearing sexy lingerie. Her hot nude pictures attracted a massive audience to the magazine. Also, she became a model for the Vanity Fair issue – she starred in a photo gallery of the winter clothes collection.

In 2017 Hewson took part in the film Papillon. In 2018 she played a role in Paper Year – the movie about spouses’ problems during the first year of co-living.

Hewson's current net worth is $8 million.

From 2010 to 2015 Hewson was dating James Martin Lafferty, an American actor. They were going to marry but broke up for unknown reasons.

In 2015 Eve started new relationships - with Max Giorgio Choa Minghella – an actor from Great Britain. The man was supposed to become her husband. However, soon on Twitter, she announced their break-up.

In an interview with Independent on September 2018, Eve told about her singlehood life including the opinion of her single status. The actress made it clear that she didn't plan to become someone's girlfriend.

"My sister says, 'you need to look more available.' She's like, 'You're so confident in yourself, you look like you have a boyfriend. I'm 23, I don't need a boyfriend. It's so much fun being on your own."

Five months ago, Hewson said in a new interview that she has also been subjected to harassment while working in films, just as dozens of other women who were mistreated spoke out to launch what became known as the #MeToo movement.

“look at situations [that] at the time I had sort of brushed off … I’ve been on a set where crew members say things to you, whisper in your ear, follow you around,” she told Story + Rain magazine.

The actress recalled one specific moment in her career:

“I had to do a sex scene once outside in a car, and like the policeman was there to help us film … He kept, like, walking into the shot and looking up my skirt. And after a while, I got out of the car and went up to him and said, ‘I know what you’re doing!’”