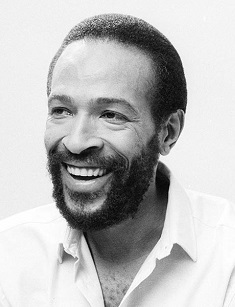 Marvin Gaye was a great talented singer and songwriter. His sorrowful childhood inspired him for writing music. As a kid, he had to endure abuse at the hands of his father. Subsequently, he found salvation in music and has created real masterpieces.

Read below about Marvin Gaye’s life, career and fate.

Marvin Gaye's birthplace is Washington, D.C. He was born there as Marvin Pentz Gaye Jr. on April 2, 1939, at Freedman's Hospital to the family of a church minister Marvin Gay Sr., and domestic worker Alberta Gay (née Cooper). Gaye had five siblings, including his brothers from his mother's previous relationship and father's extra-marital affair.

Gaye's childhood should be described as gloomy, sad. He often became a subject of physical and emotional abuse from his father – it will even became Gaye’s death’ cause.

He found a passion of his life – music – at an early age. He liked singing and playing musical instruments. As a 4-year-old kid, Marvin performed at a local church. Alongside his family, he often attended the Pentecostal church known as the House of God.

Speaking about his education, Gaye studied at Syphax Elementary School, later – at Randall Junior High School, at Cardozo High School. Attending it, the young musician performed with local bands at various concerts. At the age of 11, he sang Mario Lanza's 'Be My Love' taking part in a school play.

In 1956, being a 17-year-old teenager, Marvin dropped out of school and started serving as a basic airman in the United States Air Force. However, his imagination of Air Force happened to be absolutely different from reality. He was disappointed and had to simulate illness to leave the place. So, he got a 'General Discharge' from the service.

Later, Gaye became fed up with abuse, 'brutal whippings' by his father, left his home. In his future admissions, he described his dad as a very peculiar, changeable, cruel, and all-powerful king. According to Gaye, he would have committed suicide if his mother had not supported him.

Having left the army, Gaye, alongside his friend Reese Palmer created the vocal quartet 'The Marquees.' Its name was later changed to 'Harvey,' and the musicians started recording songs. They also worked as session singers for the other acts like 'Chuck Berry.'

Later Marvin decided to concentrate more on his solo career. So, 1961 was marked by his debut single 'Let Your Conscience Be Your Guide' and the album 'The Soulful Moods of Marvin Gaye.'

In 1962 the musician released his first solo hit entitled 'Stubborn Kind of Fellow.' The track advanced to No. 8 on the R&B charts. The following year, Gaye's song 'Pride and Joy' also got to top 10.

That time Marvin collaborated with other musicians, such as Mary Wells and Tammi Terrell. He recorded with the latter some of his best songs 'Ain't No Mountain High Enough', 'You’re the Man' and 'You're All I Need to Get By'. In 1970 Tammi became ill with a brain tumor and died, and it was a real tragedy for Marvin. He became depressed and couldn't get back to work. The singer even tried to kill himself, but music saved him.

In 1973, the musician added the album 'Let's Get It On' to the list of his projects. The collection got mixed reviews for its sexually suggestive lyrics. However, it happened to be a big hit.

The same year, Gaye went on a tour as a support for his collection.

In the late 1970s, Gaye's personal life influenced his creativity. So, that time he was getting through a messy divorce which inspired him for creating the album, 'Here, My Dear' – the story about his failed marriage to Anna Gordy. Gaye had planned on using the royalties from 'Here, My Dear' to give his ex-wife alimony payments. Unfortunately, the album performed poorly on the charts didn’t bring him success.

In 1982 Marvin Gaye pleased his fans with song 'Sexual Healing' which got to the tops of charts. The song included elements of funk, boogie, soul, and gospel. The track brought Gaye his first two Grammy Awards including Best Male R&B Vocal Performance, in February 1983, and also won Gaye an American Music Award in the R&B-soul category.

At the beginning of 1983, Marvin Gaye alongside Gordon Banks performed with the song 'The Star-Spangled Banner' at the NBA All-Star Game at The Forum in Inglewood, California. The following month, the musician was invited to perform at the Motown 25: Yesterday, Today, Forever special. In May he appeared on the show Soul Train - it was his final TV appearance.

Gaye started his final tour entitled The Sexual Healing Tour, on April 18, 1983, in San Diego. The tour ended on August 14, 1983, at the Pacific Amphitheatre in Costa Mesa, California. Having closed the tour, Gaye returned to his parents' house in Los Angeles. In early 1984, 'Midnight Love' was nominated for a Grammy in the Best Male R&B Vocal Performance category, his 12th, and final nomination.

Marvin Gaye first married in 1963. He tied the knot with Anna Gordy. They have never had children together but adopted one baby boy. However, their relationship ended in divorce.

In 1977 Marvin married for the first time – his second wife was Janis Hunter. Because of Gaye's drug addiction and mental health problems, the marriage was ended in 1981.

Marvin Gaye has developed a severe addiction to cocaine, which affected his health, finances, and personal life hugely.

Gaye has faced potential imprisonment for failure to pay back taxes of over $4 million.

Marvin Gaye died on April 1, 1984. That day his parents had a heated argument about insurance money and, according to police, Gaye intervened when the fight became violent.

His father, Marvin Gay, Sr. shot Gaye in the shoulder and in the heart. The shot to the heart was fatal. Gaye was rushed to the hospital where he was pronounced dead on arrival. So, Marvin Gaye died the day before his 45th birthday.

Marvin Gaye's body was cremated, and his ashes were later scattered into the Pacific Ocean. Reverend Gay was charged with first-degree murder. However, it was subsequently announced that Reverend Gay had a brain tumor and his charges were subsequently reduced to voluntary manslaughter. So, he got a six-year suspended sentence and died four years later at a nursing home in 1988.

By the moment of Marvin Gaye’s death, his net worth had been evaluated at $5 million.

Gaye was posthumously honored with the Grammy Lifetime Achievement Award, the Rhythm and Blues Music Hall of Fame, the Songwriters Hall of Fame and the Rock and Roll Hall of Fame.

Gaye's clothing style was later appropriated by Eddie Murphy in his role as James 'Thunder' Early in Dreamgirls.

In 2013 the musician’s daughter Nona Gaye accused Robin Thicke and Pharrell Williams of copying her father’s music to create 'Blurred Lines', the biggest hit song of 2013.

Besides music, Gaye has also dedicated himself to playing in movies, such as: