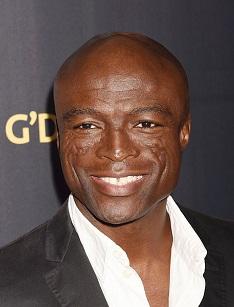 Seal (original name is Henry Olusegun Adeola Samuel) is a British singer-songwriter. He is known internationally for such hits as 'Crazy,' 'Kiss from a Rose,' and 'Love’s Divine.' Having started his music career in the 1990s, he has already achieved high results.

Meet Seal in person through reading the article!

Seal was born on February 19, 1963, in London, England to the multicultural family of Francis Samuel and Adebisi Ogundeji. So, his father was of Brazilian ancestry, while his mother came from Nigeria. He grew up in a foster family for a few years, before being raised by his father and stepmother. His dad was inclined to physical abuse.

Speaking about Seal's education, he got a degree in architecture and had to do odd jobs to earn a living before venturing into music.

Seal's music career started with his short performances in local bars and pubs. In 1987, he became a member of the British funk band 'Push' – together they have toured many countries. He toured around India on his own, before returning to England.

That time young celebrity was lucky to meet producer Adamski – alongside him, Seal recorded one of his biggest hits - 'Killer.' Due to the track, the musician gained listeners' and professional experts' attention.

Later Seal was signed to 'ZTT Records' and released his self-titled debut album. It was produced by Trevor Horn and came out in 1991.

Remarkably, all collection's songs received positive reviews from critics and fans. So, 'Crazy,' 'Future Love Paradise,' and 'Killer' got to the top of the charts. 'Crazy' rocked the 'UK Singles Chart' and finished seventh on the 'Billboard Hot 100' in the US.

Shortly after, Seal contributed his track 'Crazy (If I Was Trev Mix) to the 'Red Hot Organization's compilation CD 'Red Hot + Dance.' All the money got from the album's sells were donated to charities working for AIDS awareness.

That time Seal was working on his second album. It was eventually released in 1994, and Trevor Horn was again responsible for the collection's production.

It consisted of such popular songs by Seal as 'Prayer for the Dying' and 'Newborn Friend.' The album earned a 'Grammy' nomination for the 'Album of the Year.'

The collection's track 'Kiss from a Rose,' became popular only after it was remixed and used as the soundtrack of 'Batman Forever.' It brought Seal 'Grammy Awards' for the 'Record of the Year' and the 'Song of the Year' in 1996.

Seal's third collection was entitled 'Human Being.' It was recorded during a very anxious time in his life. The album didn't bring him much success and didn't do well commercially. Its most popular songs are 'Human Beings,' 'Latest Craze,' and 'Lost My Faith.'

The musician announced he would release his new album soon but had to postpone the date. It eventually came out in 2003 under the name 'Seal IV.' It was not really of high success but made people from the US and continental Europe pay attention to Seal. Fans especially liked collection's tracks 'Get It Together,' 'Love's Divine,' and 'Waiting For You.' The second one succeeded in European countries.

In 2004, he released the album 'Seal: Best 1991–2004,' which was a compilation of all his hits. It also included covers of the Bacharach/David classic 'Walk on By' and the 'Echo & the Bunnymen' song 'Lips Like Sugar.'

2006 was marked by releasing of 'One Night to Remember' on DVD – a concert originally recorded in June 2005, and the DVD included a special 'the making of' documentary.

In 2007 seal added 'System' to the list of his albums. It was recorded alongside his producer Stuart Price. 'System' was more dance-oriented in comparison to his other albums. Its first single, 'Amazing,' brought Seal nomination for the 'Best Male Pop Vocal Performance' at the 50th 'Grammy Awards.'

In 2008, Seal presented his sixth studio album, 'Soul.' Among its tracks, there was a cover of Sam Cooke's song 'A Change Is Gonna Come.' One year later, he pleased his fans by 'Hits,' a compilation album. The collection consisted of 2 songs 'I Am Your Man' and 'Thank You.'

In 2010 fans could listen to Seal's seventh album, 'Seal 6: Commitment.' Its first single, 'Secret,' became available on 'iTunes' in the US and the UK. According to Seal's admissions, his ex-wife, Heidi Klum, inspired him for the collection.

Seal’s net worth is evaluated at $30 million.

In February 2004 Sean started a relationship with famous German model Heidi Klum. They married on May 10, 2005, in Mexico, near Seal's home on Costa Careyes. Four years later, Klum officially adopted her husband's last name and came to be known as Heidi Samuel.

On May 5, 2004, Klum welcomed her daughter Helene 'Leni' Boshoven Klum, the kid from her previous relationship. Seal officially adopted the girl in 2009. Later, Leni's last name was changed to 'Samuel.'

In January 2012 they decided to break up. Their marriage was officially ended in 2014, but they still remain friends.

Seal has a rare form of lupus due to which he started to develop scars on his face at the age of 23.

In October 2011, the musician was criticized for visiting an event in Grozny, Chechnya, that turned into a birthday celebration for Ramzan Kadyrov, the President of Chechnya. The latter have received accusations of torture, disappearances and extrajudicial killings of political opponents and human rights workers in Chechnya by Human Rights Watch and other human rights organizations.

Seal refused to apologize for the incident, sending a message from his Twitter account telling people to "leave me out of your politics." According to some sources, Seal succeeded to make $500,000 for singing at the party.

Seal has actively donated large amounts of money to charity. Seal performed on his own singing the 1986 hit 'Who Wants to Live Forever' and joined the rest of the acts for the all-star finale singing 'We Are The Champions.'

In 2012, he teamed up with rapper Kanye West, Soul Rebels Brass Band, and Snoop Dogg to perform at a charity event for Brad Pitt's 'Night to Make It Right Foundation,' hosted by Aziz Ansari. The charity event, hosted by Ellen DeGeneres, raised money to build homes for victims of Hurricane Katrina.