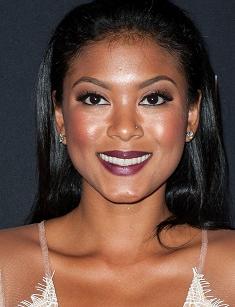 Eniko Parrish is an American model who is also known as the wife of a famous Hollywood actor, Kevin Hart. Parrish is often called as “Enikobaby” by her admirers. We can say that Eniko gained recognition mostly after her marriage with Kevin.

Eniko Parrish was born in Maryland in 1984. Her family has the Afro-Jamaican and Asian descent. Parrish used to live with her parents in Baltimore before moving to Los Angeles, where she started her modeling career. Speaking about Eniko’s famous relatives, she has a cousin, Jordan Craig, who used to date a basketball player, Tristan Thompson.

Eniko has the appearance of a model, and that is a fact. By the way, she is even taller than her husband, Kevin. Parrish can be called a fashion icon, and she shows her interest in this field by using her social media pages. In 2013, she appeared on the BET’s Rip the Runway, a fashion, and music show with Boris Kodjoe and Kelly Rowland as its hosts.

However, since 2017, Eniko has worked less because she became a mother. Recently, the model announced about her working on the opening of her own boutique for brides.

Parrish met her current husband, Kevin Hart, at some Hollywood event, in 2009. In 2014, Eniko and her boyfriend announced their engagement. In 2016, the couple had a private wedding ceremony which was visited by their friends, including Nelly, Ludacris, and Fabolous. Next year, in autumn, their first child, Kenzo Kash Hart, was born. Besides, Eniko became a mother of two Kevin’s kids from his previous marriage, Heaven Leigh and Hendrix.

The spouses had some unpleasant moments in their life. In 2017, while Eniko was carrying their baby, Hart cheated on her. The video of Kevin and another woman making out went viral. Rather soon, Kevin apologized to his wife publicly. As we can see, their marriage is fine now. By the way, at the Met Gala Celebrating Camp event in New York this year, the actors Chris Rock and Megalyn Echikunwoke were mistaken for Kevin and Eniko.

Eniko has an estimated net worth of $1.5 million, and her husband has approximately $150 million which he earned from his tours as a comedian and various roles in successful movies. Parrish made her money by the job as a model, meaning runways and photoshoots for different brands.