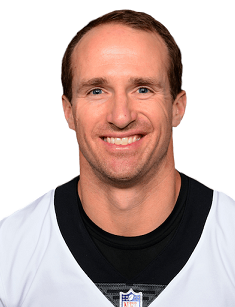 Drew Brees is an experienced American football player performing for NFL’s New Orleans Saints on a quarterback position. The sportsman has accomplished a revered position in football ever since his university days and has earned a post graduate scholarship from the ‘National Football Foundation’ in 2000.

Drew Brees was born on January 15, 1979, in Austin, Texas to the family of Eugene Wilson "Chip" Brees II, a prominent trial lawyer, and Mina Ruth (née Akins; died 2009), an attorney. Interestingly, his granddad took part in the Battle of Okinawa. There was a statement Brees was named in honor of Dallas Cowboys wide receiver Drew Pearson. Later it turned out to be just a legend. Drew Brees grew up alongside his younger brother Reid (born 1981). At the age of 7, Drew had to get through his parents' divorce. The spouses shared custody of the boys, and the kids were often torn between mother and father. In his future admissions, Drew Brees said that it was a very tough and challenging life after the divorce. Later, his dad re-married and introduced Audrey, their younger half-sister, to the boys.

From the very childhood, Drew Brees was inclined to sport. His dad had been a basketball player in his younger days, and his mother took part in a few all-state sports in high school. Moreover, Brees' maternal uncle, Marty Akins was a player for 'Texas Longhorns' – he performed on a quarterback position.

As for Drew Brees' education, he studied at 'St. Andrew's Episcopal School' and showed interest in three sports - basketball, baseball, and football. However, football dominated most of his interest after he helped the 'Westlake High School' football team win 16-0 victory and advance to a state championship.

As a teenager, Bress wanted to walk in the footsteps of his uncle but failed to join Texas Longhorns.

Having graduated from high school, the sportsman entered Purdue University and graduated with a degree in Industrial Management in 2001. Studying there, he trained under Joe Tiller's guidance in his sophomore year. The player had a successful college football career, and decided to continue with his senior year rather than join the NFL Draft.

Drew Brees' professional career started in 2001 when he was selected by San Diego Chargers in the 2001 NFL Draft. His first NFL match was against Kansas City Chiefs (held on November 4, 2001).

Drew started the season 2004 with 15 games and managed to assist his team in acquiring a 12-4 victory. After a decade, his team won AFC West tournament and he was an obvious choice for the 2004 Pro Bowl.

The next year, Brees became a free agent but continued performing for the franchise. So, in Week 4, playing against the New England Patriots, he was 19 of 24 for 248 passing yards and two touchdowns and received AFC Offensive Player of the Week.

In the last game of the season, Brees got injured – he tore his labrum while trying to pick up his own fumble after being hit by Broncos safety John Lynch. The sportsman had to undergo arthroscopic surgery on January 5, 2006.

Shortly after, the Chargers offered Brees sign a 5-year, $50 million contract. He proposed them increase the price, but they denied. Then, Drew Brees met with other teams. So, the New Orleans Saints and the Miami Dolphins planned to buy him. Eventually, he was signed to the Saints on March 14, 2006 – they had a 6-year, $60 million deal.

Brees' first year with the franchise was really successful for him. Even after the team battled with the catastrophe 'Hurricane Katrina,' they still managed to receive the 'NFC South Division' title.

Having made 4418 passing yards and 26 touchdowns, the sportsman was selected as starting quarterback for 2007 Pro Bowl. Totally, in 2007 he scored 28 touchdowns and 4,423 passing yards.

In 2008, the Saints failed to advance to the playoffs. However, Brees' stats were high that year – he finished 15 yards short of the NFL record for passing yards thrown in a single season established by Dan Marino in 1984. In Week 6, fighting against the Oakland Raiders, Drew Brees was 26 of 30 for 320 yards and three touchdowns and led the franchise to a 34-3 victory. Two weeks later, having faced the San Diego Chargers, the player made 339 passing yards and three touchdowns helping the franchise win one more time. The successful match against the Green Bay Packers brought Brees 323 passing yards and four touchdowns. In total, he closed the season with 5,069 yards and with that became the second ever quarterback who has crossed 5,000 in NFL history.

Drew's brilliant performance throughout his six-year contract made New Orleans Saints offer him a five-year $100-million contract, the largest amount to ever be offered to a player in NFL.

2015 was marked by Brees' spectacular 80-yard touchdown pass to C.J. Spiller which led the team to a 26-20 victory in the match against Dallas Cowboys on October 4. He became the fifth player to earn 400 touchdowns and is now named the fastest player to reach the milestone. Later that year he crossed the 60,000-yard milestone in merely 215 games. That year, he achieved a record of 96 matches with straight 300-yard games.

Drew Brees’ net worth is evaluated at $100 million.

Drew Brees has a wife – Brittany Dudchenko. The two met being students at Purdue and married in 2003. They began dating as sophomores at Purdue, in Brittany's home state of Indiana, and they moved to California together when Drew was the 32nd pick of the 2001 NFL Draft. The spouses have four children: sons Baylen, Bowen, Callen, and a daughter Rylen. Drew underwent a vasectomy after his daughter Rylen and the couple are already not able to have more kids.

Drew Brees’ mother died in August 2009. In November 2009 it was revealed the death was ruled a suicide. Mina committed suicide while taking too many prescription drugs in Colorado when visiting Drew's brother Reid.

In 2003, Brees alongside his wife created the Brees Dream Foundation aimed to support cancer patients and honor Brittany's aunt who died of cancer. Since Brees' move to New Orleans, the foundation has expanded to provide assistance for Hurricane Katrina rebuilding projects. The organization continues to fund and support various programs in San Diego, California.

Brees also sponsors the Rebuilding Through Brotherhood program to invite fellow Sigma Chi members to the New Orleans community to build homes with the Habitat for Humanity.

In 1999 Drew Brees was named a finalist for the 'Davey O'Brien Award' for best national quarterback player. In 2000, he was honored with the r the 'Nation's Oustanding Player.'

He got the 'Big Ten Medal of Honor' thrice in his coMaxwell Award follegiate football career.

For his dedication and selflessness, the player received the 'Purdue's Leonard Wilson Award' by his university. Later in 2009, he was also inducted into the 'Purdue's Intercollegiate Athletics Hall of Fame.'

In 2010, the US President Barack Obama announced that Drew held the co-chair of the 'Council of Fitness, Sports and Nutrition' alongside the gymnast, Dominique Dawes.

In 2019, the sportsman was honored with the Best Record-Breaking Performance ESPY Award alongside Zion Williamson.