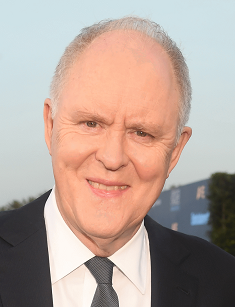 John Arthur Lithgow is an American author and actor who stars in television project and films and also performs in the theatre. He is mostly known for his roles in the series 3rd Rock from the Sun (1996–2001) and The Crown (2016–2017), films The World According to Garp (1982) and Terms of Endearment (1983), etc. Lithgow is an owner of 22 awards, including Tony Awards, Emmy Awards, and Golden Globe Awards.

Lithgow was born in 1945 in New York. His family was full of talented members. John’s mother, Sarah Jane, was an actress, and his father, Arthur Washington Lithgow III, was a producer and director who managed the McCarter Theatre in Princeton, New Jersey. Because of Arthur’s job, the family has been moving during Jonn’s childhood; he has spent his youth years in various cities of Ohio: Yellow Springs, Akron, and Lakewood.

John has attended the Princeton High School. Then, he went to Harvard College, where he graduated with a degree of Bachelor of Arts in history and literature in 1967. There John understood that he wanted to be involved in acting. After that, Lithgow became a part of the Fulbright–Hays Program, which gave him the opportunity to become a student of the London Academy of Music and Dramatic Art (LAMDA). After graduation, he came back to New York and started performing on Broadway.

In 1973, Lithgow played in The Changing Room at the Morosco Theatre, which was his debut on Broadway and became a great start of his acting career. For this role, he got his first Tony Award.

John has appeared on stages of various theaters: Brooks Atkinson Theatre, where he played in My Fat Friend in 1974, Martin Beck Theatre (Requiem for a Heavyweight, 1985), Eugene O'Neill Theatre (M. Butterfly, 1988) and so on. In 2002, the actor starred in the Sweet Smell of Success as J.J. Hunsecker; for this Broadway adaptation of the film, he has won the Tony Award. In 2005, Lithgow was elected to be put into the American Theater Hall of Fame for his work on Broadway. John plays not only in American theaters, for instance, in 2012-2013 he appeared in The Magistrate as Police Magistrate Aeneas Posket at the National Theatre in London.

In April–May 2019, Lithgow is playing the role of Bill Clinton together with Laurie Metcalf in the role of Hillary Clinton in the play Hillary and Clinton on the Broadway stage. Also in May 2019, the actor finishes his solo play John Lithgow: Stories by Heart which he has written by himself and has been performing around the United States since 2008.

Almost at the same time when John started appearing on the theater scene, he began his movie career. His debut role was Robert Lasalle in the film Obsession (1976). However, the actor became more active in filming after the 1980 year when she got divorced and passed some psychological therapy. In 1983, Lithgow starred in the Twilight Zone: The Movie that was produced by Steven Spielberg as the paranoid passenger. In one of his interviews, John claims that this role is his favorite one among all his movie roles. Besides starring, John also has done some voice acting: he voiced Lord Farquaad in the animated film Shrek (2001) and was a narrator in the documentary Life's Greatest Miracle (2002).

Among his latest projects, there are Pet Sematary (2019), the film based on the Stephen King’s novel, Late Night, Tomorrow Man, and Fair and Balanced. Last three are going to be released later in 2019.

Besides movies, Lithgow stars in TV shows and series. His most famous role on the television is Dick Solomon in the sitcom 3rd Rock from the Sun (1996–2001), where, by the way, also appeared his son Ian. In 2009, John starred in twelve episodes of the popular series Dexter, where he played the role of a serial killer Arthur Mitchell. He also had one of the leading roles in the sitcom Trial & Error (2017). Among the project where Lithgow participated, there are some well-known series like How I Met Your Mother (2011–2014), Amazing Stories (1986) and also the show Saturday Night Live (1985–1988). John’s recent role was Winston Churchill in the historical drama series The Crown (2016–2017) which had a huge success.

Lithgow has a net worth of $45 million which he has got and continues getting from his great acting career. Apart from acting, John also releases some music albums and books for children like Remarkable Farkle McBride (2000), A Lithgow Palooza (2004), Carnival of the Animals (2004), etc. Lithgow has released three albums: Singin' in the Bathtub (1999), Farkle & Friends (2002), and The Sunny Side of the Street (2006). The young audience really appreciates John’s work.

In 1966, John married Jean Taynton, who was a teacher. They had a son together, Ian, who became an actor and also a psychologist. The pair split in 1980 after Lithgow had cheated on his wife with actress Liv Ullmann. Next year, the actor married a professor of history, Mary Yeager, and since then the pair have lived happily together. The spouses have two children: a son Nathan and daughter Phoebe.

The list of Lithgow’s awards is endless! The actor has won two Tony Awards, six Emmy Awards, two Golden Globe Awards, three Screen Actors Guild Awards, an American Comedy Award, and four Drama Desk Award. He also got a star on the Hollywood Walk of Fame and has been involved into the American Theater Hall of Fame.

Among John’s awards we can find: