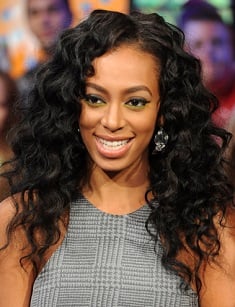 Solange Piaget Knowles (shortly – Solange) is a famous American singer, songwriter, producer and actress. The woman became interested in singing in childhood and reached her first success at the age of 16. Also, she is Beyoncé's sister.

Solange is from Houston, Texas, the USA. She was born on June 24, 1986, to the family of Mathew Knowles and Tina Knowles. Besides Solange, they have the eldest daughter Beyoncé. Solange is of mixed race: her father is from Alabama, is African American. Tina, her mother, is originally from southern Louisiana, is Creole. She has African, Native American, and French roots.

Her maternal grandparents are Lumis Beyincé and Agnéz Deréon. The grandmother worked as a seamstress. Remarkably, Solange is relative to Acadian leader Joseph Broussard. Being a kid, she was interested in dancing and theatre. Being a 5-year-old girl, she performed as a singer at an amusement park. At the age of 9, she started writing songs.

Studying at school, Solange had to stop writing because of bad marks at school. When she was 15, Knowles substituted a departed dancer and performed with her sister's group Destiny's Child on tour. During the group's opening stint for American pop singer Christina Aguilera's tour, Knowles replaced Destiny's Child member Kelly Rowland after she broke her toes.

When Solange turned 16 years, her father gave her a present: signed her to his recording company, Music World Entertainment, along with Columbia.

Solange's father became her manager and helped her make a solo debut in 2001. So, she sang the title theme song for the animated television series The Proud Family.

The next year, Solange succeeded to sing the soundtrack to the film Austin Powers in Goldmember and took part in recording of the track "Little Drummer Boy" on Destiny's Child's 2001 holiday album 8 Days of Christmas as a backup singer. Also, she collaborated with Lil Romeo – they made a single together. Kelly Rowland offered a young star to write the songs "Beyond Imagination" and "Obsession." Solange starred in the music video of Lil' Bow Wow for the single "Puppy Love" and sang "The Master of Disguise" with Lil' Fizz.

The animated television series The Proud Family invited Solange to gave her voice for the character Chanel, the cousin of the central role Penny Proud. In 2003 the rumors appeared that Solange would join the Destiny's Child. So, in 2002 the band broke up but reunited again. However, later Beyoncé commented on the gossip saying the group was not going to take new members. Speaking about Knowles, Rowland added, "She's a solo star."

These words were symbolic: Knowles started creating her first album Solo Star. She sang there with Jermaine Dupri, The Neptunes, Linda Perry, Timbaland, and other stars. Album's musical style is primarily uptempo R&B, although Knowles said there were pop, rock, reggae and hip hop influences. One of the album's most successful work (totally, there were 15 songs) was the single "Feelin' You (Part II)." Although it didn't reach the Billboard Hot 100, it peaked at No. 3 on both the Hot R&B/Hip-Hop Singles Sales and Hot Dance Music/Maxi-Singles Sales chart.

The star gained popularity not only due to her singing talent. So, in 2004, she appeared in the episode "The Catch" of the sitcom One on One. Also, she was invited to star in the 2004 comedy film Johnson Family Vacation. There she worked with Cedric the Entertainer, Vanessa Williams, and Bow Wow. Moreover, the star wrote its soundtrack "Freedom."

In 2006 Solange took part in the film Bring It On: All or Nothing: she acted a cheerleading captain with American actress and singer Hayden Panettiere. Unfortunately, the film got negative reviews, and Knowles was called an "affordable young starlet."

Interestingly, that though Solange uses her first name while singing, she used her full name for acting.

So, starring in movies and on shows, Solange took a career break. That time she was married and moved to Idaho. There she created new songs, such as "Get Me Bodied" (which got R&B and Hip-Hop Song accolade in 2008) and "Upgrade U" for her sister's album B'Day. Also, Kelly Rowland and Michelle Williams, the members of Destiny's Child, offered her write singles for them.

Several months later the woman divorced, returned to Houston and began working on the new album. She signed contracts with Geffen and EMI. On August 26, 2008, the woman released the work called "Sol-Angel" and "The Hadley St.Dreams." The Billboard magazine called it "more of a modern twist on hip-hop and R&B flecked with tinges of blues and jazz." By December, its sales level had reached 114 000 copies. The song "I Decided" was recognized as the best album's single: it reached the top of the Billboard Hot Dance Club Play chart.

The same year, Solange created the songs "Scared of Lonely" and "Why Don't You Love Me" for her sister's album I Am... Sasha Fierce.

Later the woman released several mixtapes. One of them is I Can't Get Clearance... (including the 2010 single "Fuck the Industry (Signed Sincerely)." Through it, the musician shared her thoughts about the modern music industry.

Her next studio album was released by herself cause she left Sol-Angel, the Hadley St. Dreams and the Interscope-Geffen-A&M record label group. In 2010 the woman worked with the Midnight Juggernauts rock band from Australia. Having decided to concentrate on her album, she rented a house in Santa Barbara, California to be alone and create the masterpieces. On May 7, 2010, the star was invited to the popular children show “Yo Gabba Gabba!” with the song "Momma Loves Baby".

In her future admissions, Solange said that she worked hard on the new album. So, she could create it all day long without taking a break for eating. Because of it, Knowles suffered panic attacks. According to the star, this album was her soul, was something special for her – that's why she was ready to sacrifice. Chromeo and Pharrell Williams helped her with the project. Also, she signed a contract with the independent label Terrible Records.

The album's leading single was the song "Losing You."

In 2013 Solange moved to Louisiana. There she created her label, Saint Records. Also, Solange collaborated with The Lonely Island. At the end of the year, her label released its first album, Saint Heron.

The singer intended to release the third studio album before her 30th birthday but had to put off the date for some reasons. So, she revealed it on September 30, 2016. It was called A Seat at the Table: and was recognized as a number-one album in the United States. Earlier her albums had never been ranked so highly. Its the most famous singles are "Don't Touch My Hair" and "Cranes in the Sky."

In 2017 Knowles performed at the Roots Picnic Festival in Philadelphia, Pennsylvania, and the Glastonbury Festival.

The singer planned to release the fourth album in autumn but failed to do it. Also, she intended to perform at the Coachella Valley Music and Arts Festival, but it was canceled. In January 2019 it was announced that Knowles would star at the Bonnaroo Music Festival, the UK's Parklife festival, and Lovebox Festival.

Solange's fourth album called When I Get Home was released on March 1, 2019.

Solange's net worth is $8 million.

When journalists asked the singer who had influenced her personality and music, she noted The Supremes, The Marvelettes, Dusty Springfield, and Martha Reeves to have shaped her musical style.

However, Solange said, her most significant influencer was her mother Tina – the former member of the 1960s harmony group The Veltones. Aaliyah inspired the singer for A Seat at the Table.

Solange confessed she liked writing songs more than singing them. So, her early works were influenced by the favorite poet Paul Verlaine.

Interestingly, we can not see Solange's personality listening to her debut album, cause she was 14 at the moment of its creating and was more concerned with pleasing her record label.

Generally, in her songs, Knowles tells about a relationship, global problems, and her dead friends.

Her second album is about life events, such as marriage, divorce, and parenthood. It includes many musical styles such as pop-soul, psychedelic soul, electronica, and R&B.

Besides singing, Solange is keen on painting – it has always helped her expressed her feelings and thoughts.

Knowles was very young when she married Daniel Smith in February 2004: so, Solange became a wife at the age of 17. On October 18, 2004, she gave birth to their son, Daniel Julez J. Smith, Jr. Although she loves her child, one she said she regretted a kid at an early age.

Solange dedicated one of her songs to the boy - "6 O'Clock Blues".

The spouses moved to Moscow, Idaho. There her 19-year-old husband entered a college. In 2007 they divorced, and Solange initially took the child to Los-Angeles, later – to New Orleans, Louisiana.

Matthew Knowles assumed that the stars made it to grab attention. Actually, Solange's album sales went up 200%.

At present, Solange has an estimated net worth of $10 million.