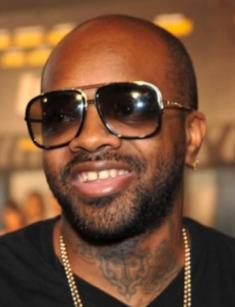 Jermaine Dupri Mauldin is a worldwide famous American rapper, songwriter, producer, and record executive. Amongst the stars he has collaborated with there are Kris Kross, Mariah Carey, Usher, Jay-Z, Alicia Keys, Bow Wow and many others. The musician is mostly known for the tracks «Lay You Down», «Live Like Me», «Turn It Out» and «Level Up.» Some of his songs were used as soundtracks in movies and shows.

Jermaine’s birthplace is Atlanta, Georgia, the United States. He was born on September 23, 1972, to the family of Tina (Mosley) and Michael Mauldin, an executive. Dupri found a passion of his life – music – as a child. He had not even turned 10 when he started a music career. So, in 1982 his dad arranged a show – a concert of young stars.

The boy succeeded to perform on stage and to dance along with Ross. At the age of 12, Jermaine got acquainted with a band Whodini. He joined the music group and starred in their video clips, such as «Freaks Come Out At Night.» Young star toured the country alongside Herbie Hancock and Cameo. Besides, he was offered to open the New York Fresh Festival, with Run-D. M. C ., Whodini and Grandmaster Flash.

He made sunglasses one of his attributes at the beginning of his career. Nowadays you can rarely see the rapper without glasses – they are the part of his scenic image.

In 1990 Jermaine produced his first career act, the female hip hop trio Silk Tymes Leather. In 1991 the producer met two talented singers Chris Kelly and Chris Smith at a local mall and helped them to form the duo called Kris Kross. They released their first album Totally «Krossed Out» in 1992. It succeeded: its singles «Jump» and «Warm It Up» peaked at the tops of charts, and the collection was named multi-platinum. In 1993 Dupri created his own label under the name So So Def. Later he got acquainted with female R&B group Xscape at a festival in Atlanta and offered them sign a contract with the label. Dupri's talent for production was proved again – their debut album «Hummin 'Comin' at 'Cha» was named multi-platinum. It included such top songs as «Understanding,» «Love on My Mind,» «Tonight,» and «Just Kickin' It.» The collection peaked at No. 2 on the Billboard Hot 100.

The same year Jermaine found another client - Kriss Kross introduced Da Brat to him on Yo! MTV Raps. They signed a deal, and the rapper published her debut platinum «Funkdafied» in 1994. In 1993 Jermaine's label became partner of Columbia Records. In 1995 the producer co-worked with Mariah Carey on the first-place single «Always Be My Baby.» Also, Dupri helped Lil ' Kim with the 1996 album called «Hard Core.»

In 1997 Jermaine wrote and produced some singles of the second album «My Way». It first single «You Make Me Wanna» peaked at No. 1 on the Rhythmic Top 40 and Hot R&B/Hip-Hop chart. Another song «Nice & Slow» also finished 1 on the Billboard 100 and Hot R&B/Hip-Hop chart. The last track «My Way» reached No. 2 on Billboard 100. These three singles were named platinum by Recording Industry Association of America (RIAA). The album featured Monica, who would also later become a protegé of Dupri. Jermaine released the second album «The Boy Is Mine.» Its single «The First Night» got to the tops of American charts, was named multi-platinum and gained worldwide recognition. In 1998 Jermaine started recording his eponymous debut album. He decided to concentrate on his own music career. The musician came to prominence after releasing the singles «Sweetheart» featuring Mariah Carey (U.S.#126), «The Party Continues» featuring Da Brat and Usher (U.S. #26), and «Money Ain't a Thang» featuring Jay-Z (U.S. #56), the lead singles from his debut studio album «Life In 1472.»

In 2000 the musician released the track «Get Down On It.»

Besides, the same year Dupri met his future colleague Lil ' Bow Wow. Interestingly, he was only 11 years old. They signed a deal.

The musicians released together 2 albums and parted the ways, but kept communicating and collaborating. In 2002 Jermaine terminated the deal with Columbia. The next year he started working with Arista Records. Serving there the producer contributed to Tamar Braxton's debut album, the track «Get None» as well as the song «Can't Stop Partying.» Meanwhile, the musician worked with DJ Chuckie – they made a vocal version of the song «Let The Bass Kick.» Soon his second studio album «Instructions» was published.

In 2004 Jermaine renewed a relationship with Usher – they created three hits «Burn,» «Confessions Part II» and «My Boo» which succeeded to get to the Billboard Hot 100. Confessions has been certified diamond by the Recording Industry Association of America (RIAA). By 2012, its sells level had been evaluated at 10 million copies domestically and more than 20 million worldwide.

At the beginning of 2005, Jermaine helped Mariah Carey with a recording of her «The Emancipation Of Mimi» with the smash hit «We Belong Together.» The single stayed at number one on the chart for 14 non-consecutive weeks and subsequently became the second longest running number one song in US chart history, after Carey's 1996 collaboration with Boyz II Men on «One Sweet Day.» The album’s single «We Belong Together» got the Grammy award for Best Female R&B Vocal Performance and Best R & B Song. That time Dupri helped Bow Wow with Wanted. He wrote and produced «Let Me Hold You.» Several months later, Jermaine collaborated with Nelly on her single «Grillz» – it reached the top of the charts again.

In 2006 Jermaine transferred from Arista Records to Virgin Records. The producer met Dem Franchize Boyz and Daz Dillinger and signed a deal with them. The latter's album, «So So Gangsta», was released in September of that year, while the former's label debut was released the following year with the album On Top of Our Game which topped the US Top Rap Albums with the hit songs «I Think They Like Me» and «Lean Wit It, Rock Wit It.» At the end of the year, Jermaine helped Janet Jackson with the promotion of an album 20 Y.O. In 2008 they collaborated again while releasing her ninth album «Discipline» in 2008 with a leading single «Rock With U.»

In autumn 2007, the producer published his memoir, «Young, Rich and Dangerous: The Making of a Music Mogul» (Atria Books).

On October 7, 2013, Dupri became Carey's talent manager when the previous one - Randy Jackson left. Together they released a song «It’s Like That.» Jermaine and Carey parted the ways in 2014 but remained in a good relationship. He produced almost all of her albums.

In 2015 Jermaine Dupri and Queen Latifah elaborated a TV-series The Rap Game. It was shown on screens for the first time at the end of 2016. Its participants were five young artists aged 11-16. They were immersed in the Atlanta hip-hop scene intending to become a rap star. The show’s experts Usher, Ludacris, Da Brat, T.I. and Silentó gave the future star pieces of advice, supported them. The majority of them have released singles under Dupri's control.

In 2018, he was inducted into the Nashville Songwriters Hall of Fame.

Dupri has dealt with financial issues for most of the 2000s. In 2002, federal agents staged a raid at two of his Atlanta residences, where they carted away furniture, computers, and cars. According to a federal tax lien obtained by MTV News, Dupri owed the government a whopping $2,541,865.

In 2011, foreclosure proceedings were initiated on his mansion in northwest Atlanta. The Hollywood Reporter states that the foreclosure was delayed for a time, but was resumed the following year. The mansion was eventually sold off at auction after Dupri defaulted on the $2.5 million loan he took out on the property. In December 2012, his home in Mount Paran was also advertised for foreclosure, but it does not appear that a foreclosure took place.

In 2011, the Fulton County Superior Court claimed that Dupri needed to pay $2,500 a month and an additional $7,500 to Sarai Jones based on the results of a paternity test. Jones’ attorney, Randy Kessler, told Billboard that Jones hopes that she and Dupri “can work together to co-parent” their daughter Jalynn.

In 2013, SunTrust Bank sued Dupri for defaulting on a $5 million loan. According to TMZ, the lawsuit alleged that the producer still owed money towards the loan, which he had taken out three years prior. Dupri put up the song copyrights owned by his record label, So So Def, as collateral, and was forced to sell off his recording studio and his So So Def music catalog to settle with the bank.

Dupri would go on to file a counter lawsuit, claiming that his personal banker took advantage of his lack of education and told him to sign a new loan agreement without telling him of the increased interest. Dupri told the Hollywood Reporter that his studio was worth $2.5 million and his music catalog a whopping $20 million. The producer sought at least $216,000 in damages and attorney’s fees.

Dupri continues to be plagued by financial issues. According to the Jasmine Brand, he was accused of refusing to pay $575k in back taxes and has been hit with a lien on May 29, 2018. The lien accuses him of refusing to pay income taxes for the years 2012, 2014 and 2015. In total, the Georgia Department of Revenue claims that Dupri owes a total of $578,638 in taxes.

Jermaine's net worth is evaluated at $2 million.

Dupri is currently single. Kandi Burruss and Jermaine Dupri dated in 1998. Later he was in a relationship with pop singer Janet Jackson from 2002 to 2009, and the couple released a number of songs together during that time, including «Call On Me» and «With U.»

In 2008, there were rumors that Jackson had become pregnant with Dupri’s child, which he took to Twitter to dismiss. He tweeted she was not pregnant. The rapper said it baffled him how people let these blog and magazines control their lives. That, he explained, was why he created the blog “so whenever [you] hear sh*t about me, you can come right here and get the truth.”

Before, Jackson was married to Wissam Al Mana from 2012 to 2017 but has been seen spending time with Dupri since her divorce. Their closeness led to reports that they had rekindled their romance, but Dupri shut down the rumors during an interview.

In 2018, rapper Bow Wow claimed to know Dupri’s personal life and claimed that the producer was married to a white woman. “Calm down before I tell the world about your wife,” Bow Wow warned. However, there has been no evidence to support Bow Wow’s claims.

Dupri has two daughters from two previous relationships: Shaniah and Jalynn. His eldest child is Shaniah Mauldin (with a woman named Pam Sweat). In his 2008 memoir Young, Rich, and Dangerous: The Making of a Music Mogul, Dupri said that he met Sweat when he was 25 and that she told him of her pregnancy after the two dates for several weeks. Shaniah has become famous as one of the cast members on the VH1 series Growing Up Hip Hop: Atlanta. Mauldin has spoken about her fame and the impact that her father has had on her career.

The rapper was in a good relationship with rapper Nipsey Hussle who died on March 31, 2019. A day after his memorial service in Los Angeles, Jermaine Dupri made some serious religious claims about the late rapper and faced some backlash from fans in the process.

On Friday (April 12), the veteran producer jumped on his Twitter account and tweeted, “I believe Nip was Jesus.”

Once the musician had rivalry with Eminem. This beef is mainly between Dr Dre and Jermaine Dupri, but Eminem has stuck up for Dre, and along with Xzibit, joined the beef against Jermaine Dupri. It all started when Jermaine Dupri claimed that he was the best producer in the game, claiming he was better than Dre and Timbaland during an interview with XXL magazine.

In his career, Dupri has recorded two albums in the studio.