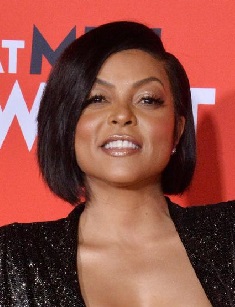 Currently, the native of Washington, D.C. is a Hollywood star, large American scale actress, who has made a name for herself on such top movies as Baby Boy, Hustle & Flow, Hidden Figures, The Curious Case of Benjamin Button, and TV series as Boston Legal and Empire. Taraji was nominated for various awards for 69 times and won 20 of them. She was included in the Time’s list of one hundred most influential people in the world.

Taraji released a book in 2016, Around the Way Girl, in which she reflects on her family, education, career and world’s problems. Also, she is the winner of Golden Globes 2016. Henson is the mother of one child. She has an estimated net worth of $16 million.

The name of “Taraji Penda” came from her roots in Africa. These words mean hope and love in the Kiswahili language. Taraji was the eldest child in a working-class family. She was born and brought up in Washington, D.C. Her birthday was on September 11, 1970. As a kid, she was forced to overcome her parents’ divorce. She was only two when it happened. However, Taraji grew up snug and secure, wrapped in the love and attention of both parents.

Taraji’s mother Bernice worked at the local department store. Her father Boris cleaned the premises and made raw materials. Once he was fired, so he was forced to live in his van. He didn’t give up, and had a great influence on his daughter’s life, supporting her in every situation.

Being a teenager, Henson decided to connect her life with art. She wanted to study at the Duke Ellington School for the Arts at Washington but was unsuccessful. Following the setback, she joined the Oxon Hill High School and completed her graduation in 1988. The next stage of Henson’s education took place in a public, historically black, research university in Greensboro. It was called North Carolina A&T State University.

She was unable to master electrical engineering in a good way. So, she managed to spend a year there. She failed the exams and moved to another historically black Howard University (HBCU) in Washington, D.C., where she studied theater. During studying, she was working two jobs.

She was a government secretary in the afternoon and a waitress in evenings. Her strong character, ability to work and high level of responsibility allowed her to study, to work, and to pay for her education.

Taraji found out that she was pregnant in her junior year of college. She was determined to keep her baby. At the same time, Taraji decided to continue her education. She asked her acting teacher not to treat her any differently and told him not to bench her from performances because of her pregnancy.

Henson received her diploma with the infant Marcel in her arms. She gave birth in 1994.

Henson landed her first professional acting gig on Smart Guy of WB. In the late 1990s, she appeared on various TV shows. In 1997 she appeared in one episode of Sister, Sister. According to several sources, her salary per episode was about $5,000 at that time. Her first big role was in the movie Baby Boy (2001). She got her first nomination for Best Actress for it. Later Taraji appeared in Division. Her salary for this show was $22,000 per episode.

In 2005 Taraji made her second outstanding performance. She played Shug in Hustle & Flow and won her first awards. In 2008 Henson played Benjamin’s mother in his curious case. Soon she was invited to take part in the movies of Tyler Perry: The Family That Preys in 2008, and I Can Do Bad All By Myself in 2009.

Henson appeared as Lauren Harris in the 2012 movie Think Like a Man that included a comprehensive ensemble cast. Also, she filmed in its 2014 sequel. The same year Taraji was selected to be a cast member of Fox’s musical drama Empire. She played Cookie Lyon. Next year Taraji appeared on Jimmy Fallon show.

Thanks to that role, she got wide recognition and critical acclaim. In 2016 the movie Hidden Figures was released. Henson appeared in it as Katherine Johnson, NASA mathematician. It was funny that Taraji failed math in college. Despite this fact, the movie was included at the Oscars’ list of nominations.

In 2019 there were released two movies, where Henson played the major roles. One of Taraji’s next movies, coming out soon, is Coffee&Kareem.

In 2019 Henson’s Empire partner, Jussie Smollett was indicted with 16 counts of disorderly conduct for allegedly filing a false report and claiming that he was the victim of a hate crime in January. There were rumors that he will be off Empire next season. On the View, Taraji broke her silence on Jussie Smollett’s charges affected his Empire castmates. She said that the team was strong. Later the police dropped all charges from Smollett.

Also this year, Taraji P. Henson was getting bashed for comparing the R. Kelly, and Harvey Weinstein alleged sexual abuse scandals, claiming that the singer was getting way more heat than the former movie mogul.

Taraji is as fearless as her Empire alter ego. In 1996, when she was 26-year-old single mother, she moved from Maryland to Hollywood. He took only her two-year-old baby and $700. She moved with the dream of becoming a big actress. How Marcel makes his career in music. In 2003 his father died.

Before fame, Taraji was a Christian. Having become a big personality in Hollywood, she continues to thank God for the moments of waking up and going to bed. Henson is sure her acting is the extension of her spirituality. Speaking about her career, the Washington-native reported: “I am just a girl from the hood who had dreams. My angels definitely looked over me”.

Henson is the active supporter of PETA and the LGBT community. She participated in various advertising campaigns, dedicated to these organizations. She even appeared nude in one of them. In 2014 Taraji became vegan. At the Golden Globes 2019, she even reflected on her trip to South Africa. He posted a video from there, where she was surrounded by young women from Soweto, treating Henson to a spirited performance of traditional dance.

In 2015 there were rumors that Taraji got engaged to Terrence Howard. They both knew each other well. They played onscreen husband and wife in Fox’s hit series, Empire. They even appeared together at the 2019 Fox All-Star Party. However, the gossips were broken down. In real life, Henson got engaged to Kelvin Hayden, former American football cornerback, in May 2018. In 2015 Terrence Howard already reported that he and Taraji have used to be married in another life.