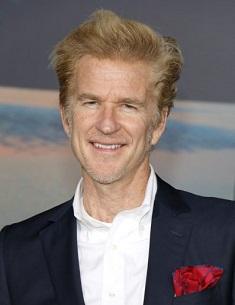 Matthew Modine is a prominent actor and director from the United States. Speaking about his contribution to the world cinema, he is mostly known for playing Full Metal Jacket– he had a role of Private Joker. Directed by Stanley Kubrick, the movie is about the war in Vietnam. Besides, he has been honored with lots of awards after appearing in And the Band Played On (the picture about people with HIV/AIDS) and taking part in shooting of What the Deaf Man Heard.

The future celebrity was given birth on March 22, 1959. As for his parents, they are Dolores, who served as a librarian, and Mark Alexander, who worked as a manager in a local theatre.

Matthew is not the only child in his family – he was raised alongside six siblings – brothers named Mark, Maury, Michael, and Russell and two sisters Elizabeth and Marica. Besides, famous actress Nola Modine Fairbanks and Ralph Jacobus Fairbanks are also related to Matthew through his family members.

Modine passed the majority of his childhood in Utah; later the family left for Imperial Beach, California. There Modine studied at a High School from which he graduated in 1977. Future celebrity left for New York City intending to develop his art and theatre abilities. Also, Modine got his education attending Brigham Young University.

In 1999 Modine directed his first pictures Smoking, If… Dog… Rabbit…. The following year he pleased his fans by presenting a new project Ecce Pirate.

In 2007, he presented his comedian project entitled I Think I Thought. Its plot describes the life of a thinking person who finds himself in the organization of other thinking people.

In 2011 Modine contributed to the world of cinema by making Jesus Was a Commie – a movie about sharp social problems. Professional filmmaker Terrence Ziegler helped in directing of the picture. That year, Matthew also presented a new movie Family Weekend. Shortly after, the world could watch one more his picture entitled Girl in Progress.

In autumn 2004, fans could see Modine starring in Finishing the Picture. In the list of his performances, there are also play Resurrection Blues by Miller held at London's Old Vic and a stage adaptation of To Kill a Mockingbird held at Connecticut's Hartford Stage. The latter was even named the most successful one in 45 years for the theatre.

In 2010 Modine impressed the viewers of modern version of The Miracle Worker by his penetrating playing.

1983 is the beginning of Matthew Modine's movie career. So, he played in the picture Baby It's You. Its creator Harold Becker noticed actor's talent and offered him to appear in Vision Quest two years later. That time he also was seen playing in the comedian picture Private School.

The following year, Modine acted in Mrs. Soffel with a role of Mel Gibson's brother and was seen playing in Birdy.

In 1986 Matthew Modine added the movie adaptation of stage play Orphans to the list of projects he has appeared in.

1988 was marked by Matthew Modine's role of Mike Downey, serving as an American spy, in Married to the Mob. Two years later, fans could watch the movie Memphis Belle featuring Matthew Modine. In his life, he has also tried himself out in animated cinema. So, 1995 brought Modine the role in Cutthroat Island.

In 2003 Modine was invited to star in The West Wing – he acted as Marco. His castmate was famous Allison Janney. In 2003 the actor also played Fritz Gerlich in the picture Hitler: The Rise of Evil.

The same year, the celebrity acted in Funky Monkey with a role of Alec McCall. In spite of getting mixed reviews, the project became very popular among the American audience.

The following year, Matthew acted in Mary by Abel Ferrara. In 2006, the actor got the role in Law & Order: Special Victims Unit – the episode was titled Rage. Besides, Matthew Modine played Sullivan Groff in the Weeds' season three.

The next movie Modine starred in was The Trial in 2010 which was honored by many awards for the fusion of different movie genres. Besides, he appeared as John Thain in Too Big to Fail that year.

2012 was marked by Modine's appearing in The Dark Knight Rises (the movie about Batman Universe).

The following year, the actor took part in the shooting of the Last Days of Coney Island.

2014 brought him the role in Alter. In 2016 Modine appeared as Dr.Martin Brenner in Stranger Things.

The following year, the musician Logic invited Modine to take part in shooting of a videoclip for one of his tracks.

In his career, Modine has earned a net worth of $10 million.

From the very childhood, the celebrity has been keen on cycling. He prefers this kind of transport to any other even nowadays. Also, Matthew is a leader of a special organization under the name Bicycle for a Day and has got several awards for his positive contribution to the environment.

The actor has a wife – Caridad Rivera. The two tied the knot in 1980 and now are parents of two kids - Boman Mark and Ruby.

Earlier, Modine had reportedly had an affair with Winona Ryder – they worked together in Stranger Things.

In 2013 Bill Simmons criticized Modine for not appearing at Game 5 between the Knicks and Celtics. Matthew responded him in Twitter, and Social Network feud started.

By his appearance, Matthew Modine looks like Crispin Glover.

In 1994 the actor became a winner of Golden Globe Award for the picture Short Cuts.