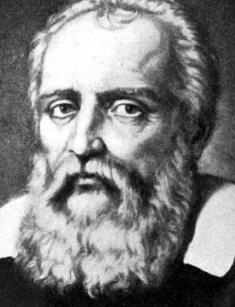 Galileo Galilei is one of the greatest Renaissance figures, the founder of the modern mechanics, physics, and astronomy; he was the successor of Nicolaus Copernicus’s ideas and the predecessor of Isaac Newton.

The would-be scientist was born in Pisa, Italy, on February 15, 1564. The boy’s father, Vincenzo Galilei, belonged to an impoverished noble family, played the lute, and wrote books on the theory of music. Besides, Vincenzo was a member of the Florence Camerata: the group was going to revive the ancient Greek tragedy. Musicians, poets, and singers collaborated effectively and created a new genre, opera, at the turn of the 17th century.

Galilei’s mother, Giulia Ammannati, kept the house and brought up four kids: the eldest son Galileo, Virginia, Livia, and Michelagnolo. The youngest son followed in his father’s footsteps and earned his fame as a composer.

When the future physicist was eight, the family moved to the capital of Tuscany, Florence, where the Medici dynasty ruled; they were known as the patrons of artists and scientists. Galilei went to the school at the Vallombrosa monastery; he showed many talents in drawing, languages, and sciences. Although Galileo inherited his father’s ear for music and compositional taste, sciences attracted him most of all activities.

At the age of 17, Galileo went to Pisa to study medicine at a university. The young man not only paid attention to major subjects and doctor’s practice but also attended math classes. The world of geometry and algebraic formula had a significant impact on his views. Overall, Galilei spent three years at the university and scrutinized ancient philosophers’ and scientists’ works; this is when he got acquainted with Copernicus’s heliocentric model.

At some point, Galilei had to return to Florence – the parents had no money for further education. The university administration did not give the talented young man the chance to graduate with a degree. Fortunately, he had already met his powerful patron, Guidobaldo del Monte; he admired Galileo’s abilities and talked to Duke of Tuscany Ferdinando I. Thus, Galilei did not have to think about his salary.

Del Monte helped his talented protégé become a teacher at Bologna University. Galileo began his academic activities and delved into mechanics and mathematics. He returned to the University of Pisa in 1689 and spent there three years – he was no longer a student, though, and taught mathematics. In 1692, the scientist moved to Padua, the Republic of Venice, for 18 years.

Galilei combined his university work and scientific experiments. The books On Motion and Mechanics rejected Aristotle’s ideas, and the invention of a telescope occurred at the same period: thanks to the instrument, one could watch celestial bodies. Galilei described his discoveries in the treatise The Starry Messenger.

In 1610, the mathematician came back to Florence; sponsored by Cosimo II de' Medici, Grand Duke of Tuscany, he published Three Letters on Sunspots. The Catholic church criticized it; the supporters of the Copernican model were prosecuted, and the Inquisition was strong at the beginning of the 17th century. For example, Giordano Bruno had already been burned at the stake – he did not recant heresy.

Catholics believed Galilei’s works were provocative, but the scientist himself did not see any contradiction between his studies and the Christian worldview. The Bible was the book that helped save one’s soul, not served educational purposes.

In 1611, Galilei went to Rome to show his telescope to Pope Paul V. The presentation ran smoothly and correctly; even the capital astronomers approved of that. However, the request to make the final decision about the heliocentric system settled the researcher’s destiny: Galilei was accused of heresy, and the process began in 1615. The next year, the Roman commission officially named the idea of heliocentrism false.

Galilei’s major idea was about objectivism of the world, unrelated to a person’s subjective perspective. According to the scientist, the universe is eternal and endless, initiated by the first God’s impulse. Nothing in space vanishes without a trace: substance changes its form. The whole universe is based on mechanical movements of particles; when they are studied, the laws of the existence will be discovered. As a result, scientific studies must be based on experience and sensual cognition of the environment. Galileo viewed nature as the true object of philosophy; it can bring people close to the truth and the primary source of everything.

The man employed two methods: experiments and deduction; the first was necessary to prove hypotheses while the second implied consecutive movement from one experiment to another to reach the full knowledge. Galilei criticized Aristotle’s ideas but did not reject his analytical approach; Archimedes’s works were the fundament for the Italian.

In 1609, the scientist invented a telescope; the arched lens and concave ocular were used. Galilei started watching celestial bodies. Three-time magnification was not enough for this purpose, and the astronomer created another telescope with the 32-time magnification.

The Moon was the first object Galilei studied with a telescope: he founded many mountains and craters on its surface. Aristotle’s argument about the different nature of the sky and the Earth was undermined – our planet was similar to other objects in the system.

The second ground-breaking discovery was about four satellites of Jupiter; space photography confirmed this information in the 20th century. Thus, Galilei demonstrated that the Moon circled the Earth, and the Earth circled the Sun simultaneously. His equipment was imperfect, and the physicist could not identify the time of the satellite circuit circle. 70 years later, another astronomer, Cassini, finally proved the existence of the circuit circle.

It was Galilei who discovered sunspots; he watched the Sun for a long time and concluded it was rotating on its axis. The scientist determined that Venus and Mercury had their orbits closer to the Sun than the Earth and founded Saturn’s rings. Galileo described Neptune, but, again, the imperfection of his equipment prevented him from further progress. He also watched stars in the Milky Way: they seemed countless.

The astronomer’s experiments and empirical research showed that the Earth was moving not only around the Sun but also revolving about its own axis. These were trenchant arguments in favor of Copernicus’s ideas. Galilei was welcomed in the Vatican and joined the Lincean Academy, founded by Federico Cesi.

According to Galilei, mechanical movements are the foundation of all physical processes in nature; the universe is a complex mechanism made of simpler parts. Considering this worldview, the scientist made mechanics the cornerstone of his studies and predetermined the development of physics in the future.

The scientist formulated the law of falling bodies and proved it empirically. He also created the formulae of parabolic motion necessary for calculating artillery tables. Galilei’s law of inertia became a primary axiom of mechanics, and his relative principle for the classic mechanics was equally revolutionary.

Galileo is known for creating the pendulum swing formulae; in 1657, the physicist Christiaan Huygens constructed the first pendulum clock in the world. The Italian mechanist also drew his attention to the strength of materials; a new independent science originated later. Galilei’s ideas contributed to the development of scientific knowledge about a force moment and energy conservation in a gravity field.

Galileo’s mathematical arguments were close to the theory of probability; he wrote about it in the treatise On Outcomes in the Game of Dice, published 76 years after the author’s death. He also created the famous mathematical paradox about natural numbers and their squares (Discourses and Mathematical Demonstrations Relating to Two New Sciences). These materials became the foundation of the theory of sets and their classification.

The conflict with church

1616 was the peak of Galileo’s career; he had to withdraw into the shadows later, as he was afraid to talk about his ideas openly. When Nicolaus Copernicus was accused of heresy, only one book by Galilei was published: The Assayer (1623).

The chance of power in the Vatican gave some hope, for the physicist expected Pope Urban VIII to be more positive about Copernicus’s theory than his predecessor.

Still, the polemic treatise Dialogue Concerning the Two Chief World Systems gave the ground to institute proceedings against Galilei. The story of the accusation repeated itself, but the consequences were direr.

Young Galileo met Marina Gamba from the Republic of Venice when he lived in Padua. Soon, the couple started living together. Three children were born in this union: the son Vincenzo and the daughters Maria and Livia. Because of the out-of-wedlock status, the girls had to become nuns later.

At 55, Galileo legalized his son, and Vincenzo could finally marry. The scientist’s grandson was born soon; he followed his aunts’ example and devoted his life to God.

When the Inquisition proclaimed the astronomer an outlaw, he moved to a villa in Arcetri, not far from his daughters’ nunnery, and often saw his favorite elder daughter, Virginia (Maria). The younger, Livia, was too sick for such visits.

In 1633, Galilei was imprisoned for a while and gave up the idea of heliocentrism; he was arrested for an indefinite period in Arcetri, and his contacts were limited. The genius died there on January 8, 1642; two of his students, Viviani and Torricelli, were present.

The last works of the philosopher, Discourses and Mathematical Demonstrations Relating to Two New Sciences and Dialogue Concerning the Two Chief World Systems, were published in the 1630s in Protestant Holland.

Catholics prohibited burying the physicist in the tomb of the Basilica of Santa Croce, where Galileo wanted to rest. Justice was served in 1737; he was buried next to Michelangelo.

20 years later, the Catholic church rehabilitated the idea of heliocentrism, but the personal discharge happened many years later: Pope John Paul II admitted the error of the Inquisition in 1992.