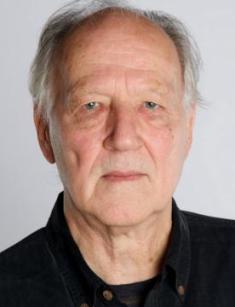 The legend of world cinema, Werner Herzog, is a talented director, whose projects distinguish themselves with the unique style. The heroes of his movies are often rebels, cranks, or just madmen. The man pays great attention to scenery because a beautiful scene often influences the development of the whole story and determines the plot. The prestigious awards, which Herzog’s movies have won, prove his talent.

Werner was born in September 1942, during World War II, in Munich, Germany. He spent his childhood far from the hustle and bustle of the city life, in the Bavarian mountain village of Sachrang. When Herzog was 12 years old, he and his mother returned to his native Munich. Since they were short of money, the family rented an apartment with other people. His housemate was Klaus Kinski, an eccentric actor, who later starred in Werner’s films more than once.

Herzog studied at a local gymnasium and worked on a steel factory as a welder at night to earn money for his first films. At the age of 17, Werner tried to launch the first project. He wrote the script and sent it to the German production company. The movie even went through the production stage, but viewers did not see it. Having learned that the author was not 18 years old, the project was closed.

In his youth, the young man was fond of poetry; he composed poems, participated in competitions, and won prizes. After graduating from high school, he began to study literature and history and learned more about theaters.

The first short movie appeared in Werner’s filmography in 1962. The young man was 19 years old, he studied at Munich University, but found time to create a script and shoot a documentary film, Herakles. He invited Reinhard Lichtenberg (Mister Germany 1962) to play the leading role. A year after the successful debut, the director founded his own mini-studio, and in 1964 shot one more short film Game in the Sand.

At that time, the young man wrote the script for the first full-length film Signs of Life, based on the story by Achim von Arnim. However, he could realize it only four years later. Herzog received the German Film Awards for Best Feature Film and the Jury Grand Prix at the Berlin International Film Festival.

In his youth, the director tried to work on different projects, and until 1970, he created a few short movies. The movie Even Dwarfs Started Small, which plot allegorically interprets the Vietnam War, is considered the beginning of a mature period of Herzog’s creativity. In Germany, his film was banned, but those who saw the movie abroad were polarised on their view of the film.

Werner’s movie Fata Morgana also caused a stir. The documentary film consists of 3 parts: “Creation," "Paradise,” and “The Golden Age." In 1972, the man released another work, Aguirre, the Wrath of God, telling about the Spanish expedition in search of Eldorado.

The 1972 movie Aguirre, the Wrath of God made Werner one of the leading modern film directors. To shoot the project, the man and a film crew spent two months in the Amazon jungle, having a tiny budget. The team was determined to create a saga about the conquistador, Lope de Aguirre, who was obsessed with an idea. Film critics began to attribute Herzog's movies to a new wave of German cinema, which revived the national treasure, alongside the works of Wim Wenders, Volker Schlöndorff, and Werner Fassbinder.

The director's 1981 film was no less impressive. In the movie entitled God's Angry Man, Werner told the story of a television preacher, an American pastor, Gene Scott. The film contains footage of Scott on the set of his TV shows, focusing on fund-raising efforts, a barrage of accusations of viewers, and many other interesting facts. There are also interviews with Scott and Scott's parents in the movie.

In 1987, Herzog released the movie Cobra Verde, based on the novel “The Viceroy of Ouidah” by Bruce Chatwin. Klaus Kinski landed the leading role. Despite the talent of the actor, many directors did not want to work with him due to his unbalanced character, but Werner was not scared. They had previously collaborated in the movies Aguirre, the Wrath of God, Nosferatu the Vampyre, Woyzeck, and Fitzcarraldo.

In 2007, Werner presented a film at the Toronto International Film Festival, commissioned by the Discovery Channel, telling about the life of the inhabitants of Antarctica. Interviews with scientists who have visited this area have the most screen time in the film Encounters at the End of the World.

Throughout his career, Herzog has worked with Russian colleagues. So, in 2010, Timur Bekmambetov, Dimitry Vasuykov, and Werner released the new documentary project Happy People: A Year in the Taiga.

In September 2018, the new documentary film Meeting Gorbachev premiered at the Toronto International Film Festival. To create the movie, Herzog interviewed the USSR President Mikhail Sergeyevich for a year and created a 90-minute history of the decline of the Soviet Union and the achievements of the greatest political figure of the 20th century.

It should be mentioned that the director has a unique approach to work. Werner has chosen actors very carefully to make his films look real. For example, in the movie Every Man For Himself and God Against All, Herzog invited a man who spent most of his life in a psychiatric hospital to play the role of a teenager. He invited professional hypnotists to realize his idea in the film Heart of Glass. They worked with amateur actors and hypnotized them.

Les Blank's 20-minute short film entitled Werner Herzog Eats His Shoe received mixed reviews. It is a real story, focusing on the director who advised Errol Morris to shoot the documentary Gates of Heaven, but the latter worked on it for a long time. Then Herzog said that he was ready to eat his shoes if Errol released the movie. The film was released, and Werner kept his promise. At first, he cooked his leather shoes for a long time, added spices, and ate them in front of a large audience.

The personal life of the director, as well as his career, is full of relationships. Herzog’s first wife was actress and screenwriter Martje Grohmann, in 1973 she gave birth to a son. Rudolf Amos Ahmed is known as a producer, director, and author of popular science books. This marriage lasted quite a long time, but in the end, the couple broke up.

It is known that the man had a relationship with German actress and Austrian-born singer Eva Mattes, in 1980 they had a daughter, Hanna Mattes, who later became a photographer and artist. This relationship also ended, and therefore in 1987, Werner married again. This time Christine Maria Ebenberger, who gave birth to his third child, Simon, became his chosen one. The press does not know anything about the other children of the director.

In 1996, Werner moved to the USA. One year later he divorced his wife, and two years later married Elena Pisetski, who was three years older than his first son. The woman looks young and pretty in the photo. She was born in Yekaterinburg, attended the Leningrad State University, where she studied English and Spanish languages and literature. In 1990, she immigrated to the United States. Nowadays, she builds a career in photography and documentary filmmaking.

In addition to making films, the man has worked in other areas. He has written books and organized master classes, including in Russia. In addition to his native German language, the director is fluent in English and Spanish, speaks a little French.

Despite his age, the director does not plan to end his career. The man continues to work on different projects. At the end of March 2019, it became known that Herzog would play in the Star Wars spin-off.

Disney Channel is developing a project entitled The Mandalorian for its streaming video service. Werner landed the bit part of a villain in the 10-episode TV show. The director has enthusiastically accepted the offer because he is confident that he can brilliantly play negative heroes.

Werner Herzog has a net worth of $10 million.