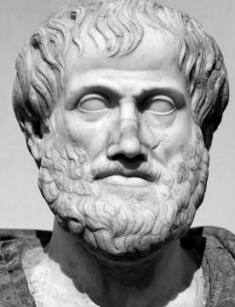 Aristotle is an ancient Greek philosopher and the student of Plato who entered the debate with him; he also founded the Peripatetic school and taught Alexander the Great. One can hardly overestimate the man’s contribution to science. For more than two thousand years, philosophers used his conceptual framework, and his ideas served as the fundament for many natural sciences. Aristotle’s legacy consists of about 50 books, which survived up to the present days thanks to his disciples and followers.

Aristotle was born in Stagira, located in a Greek colony Thrace; he was often called Aristotle the Stagirite for this reason. The would-be philosopher came from a healer’s family; the father, Nicomachus, worked as a doctor for the Macedonian king Amyntas III. The mother, Phaestis, had noble roots.

The art of healing was passed down to generations in the family. Nicomachus was going to make his son a doctor, too, and taught the boy the basics of medicine and philosophy; the latter was a compulsive subject for every Greek physician. Still, the father’s plans did not come true. Aristotle lost his parents early and left the home city.

The 13-year-old young man went to Asia Minor, where Proxenus of Atarneus became his caregiver; in 367 BC, he settled in Athens and became Plato’s student. Aristotle studied politics and philosophy, as well as flora and fauna; overall, he spent about 20 years in the academy.

As long as Aristotle proved to be a full-fledged thinker, he rejected his mentor’s teachings about ideal ideas of material objects. Instead, the young philosopher suggested his own theory – forms and matter were primary; soul and body were unattainable from each other. The great Renaissance master, Raffaello Sanzio, pictured the moment when two philosophers were arguing on his fresco The School of Athens.

In 345 BC, Aristotle left for Mitilini, Lesbos, because his friend Hermias (Plato’s former student as well) was executed for standing against the Persians. Two years later, the man was invited Macedonia to tutor the heir to the throne,13-year-old Alexander. The great philosopher taught the future leader for almost eight years; he returned to Athens then and founded his own philosophical school, Lyceum; it is also famous as the Peripatetic school.

Aristotle subdivided sciences into theoretical, practical, and artistic; physics, mathematics, and metaphysics belonged to the former group and were studied purely for knowledge. Politics and ethics pertained to the second group; they were necessary to build a state’s life. All arts, poetry, and rhetoric were included in the last type.

Four causes are the core of Aristotle’s teachings: material, formal, efficient, and final cause. Depending on these causes, he determined actions and subjects as good or evil.

The researcher founded the hierarchy principle of categories and identified ten of them: Substance, Quantity, Quality, Relation, Place, Time, Position, State, Action, and Passion. The world consisted of non-organic substances, flora and fauna, and humans.

Aristotle’s ideas pushed the development of the time and space concepts as independent variables and system of relationships created by material objects when they were interacting.

For the next few centuries, Aristotle’s types of the state remained relevant. The man presented the idea of a perfect state in Politics; he believed that a person did not live for themselves only and realized their talents in society. Blood, friendly, and other ties united people; civil society was aimed at eudemonism – the common good – rather than economic flourishment or particular people’s benefit. This model was possible only with civil rights and laws based on morality.

Aristotle described three advantageous and three disadvantageous options of administration. Monarchy, aristocracy, and polity were emphasized as the forms for the common good; tyranny, oligarchy, and democracy were seen as wrong because they followed individual aims.

The philosopher’s contribution to art was also significant. He described his view of theater genre development in Poetics; only the first part reached modern times. The second book was, probably, about the ancient Greek comedy structure. Aristotle was reflecting on theater and art and suggested the idea about the imitation phenomenon, which was inseparable from a human being and brought him much pleasure.

Another fundamental manuscript, On the Soul, pertained to metaphysical issues about any creature’s soul. The researcher explained the differences of human, animal, and plant existence; he talked about five senses (tactual sense, odor, auditory, gustation, and vision) and three abilities of a soul (nutrition, perception, and intellect).

All in all, the philosopher held his hands to every science that existed in his time; he created works on logic, physics, astronomy, biology, philosophy, ethics, dialectics, politics, poetry, and rhetoric. The collection of his texts is called The Corpus Aristotelicum.

Contemporaries left some information about the scientist’s personality: according to Plato’s successors, Aristotle did not keep his emotions inside when it came to philosophical arguments. One day, he had such a big row with his mentor that Plato avoided accidental meetings with his student.

There is little information about the man’s personal life. He was married twice and had two children.

In 347 BC, 37-year-old Aristotle married Pythias, the step-daughter of his close friend Hermias; they had a daughter named after the mother. When the first wife passed away, the philosopher started living with his servant, Herpyllis. The woman gave birth to a son, Nicomachus.

Following the death of Alexander the Great, there were many riots in Athens. His former teacher was accused of infidelity, so the man had to escape – he thought he could end like Socrates. The quote “I will not allow the Athenians to sin twice against philosophy” became famous.

Aristotle moved to Chalcis, the island of Euboea; many students followed their mentor to show their support. However, the philosopher did not live for a long time in a foreign land – he died two months later, at the age of 62. A severe stomach disease caused the death.

Aristotle’s devoted disciple Theophrastus headed the Lyceum. He developed the scientist’s teachings on botany, music, and history of philosophy and took care of saving his works.

“Gratitude makes sense of our past, brings peace for today, and creates a vision for tomorrow”.

“Plato is my friend, but Truth is a better friend”.

“The roots of education are bitter, but the fruit is sweet”.

“Education is the best provision for old age”.