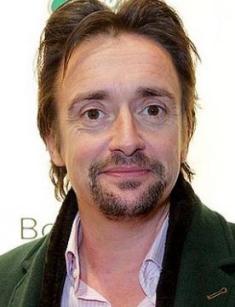 English journalist Richard Hammond is primarily known as one of the presenters of the TV series Top Gear. However, few people are aware that the native of Birmingham has written several books and released dozens of popular science programs. The most popular of them are Brainiac: Science Abuse and Richard Hammond's Invisible Worlds.

Richard Mark Hammond was born on December 19, 1969, in the English city of Birmingham. The grandson of the workers in the Birmingham car industry spent his childhood and youth in the town of Ripton, where the family with three sons moved in the mid-1980s. His father, Alan Hammond, found a job at the notary's office, and mother Eileen took care of the children.

Having worked as an assistant, the young man began to host the morning show on BBC Radio York. In between the programs, he worked as a courier and made tea and coffee for more experienced colleagues. After a while, Richard was tired of having interviews with blacksmiths, farmers, and cooks, and he started to search for more exciting stories.

In the late 1990s, Hammond began his television career and made his debut in the day programs Car File and Motorweek on Men & Motors. In each episode, the young presenter talked about the cars and lifestyle of real men, getting used to the atmosphere of the set and the work in front of the camera.

In 2002, Richard began co-hosting a new version of the car program Top Gear with Jeremy Clarkson and Jason Dawe. The fan of technological progress embarked on a new job enthusiastically and from the first season demonstrated the abilities of a talented interviewer, driver, and stuntman.

In the beginning, the colleagues were serious about Hammond, but when English journalist James May replaced Dawe, the situation changed. While going through the footage, the TV presenters notice that short and skinny Richard (his height is 5.51 ft. (168 cm), and the weight is 143.3 lbs. (65 kg)) looked very funny in comparison with the tall and broad-shouldered men.

This visual effect caused numerous jokes; as a result, the shortest participant of the program was called Hamster, and the name stuck. In each program, Clarkson and May made fun of their colleague who ate cardboard and bleached teeth, and they forced him to participate in amazing car experiments.

For 12 years, Richard had to check whether the car could run on cow manure and whether the stretch limo could jump over a wedding party. In one of the 2004 series, Hammond was struck by man-made lightning in a car, testing a VW Golf V. Then he played the road version of Russian Roulette, setting the world record for the number of times a car has rolled at high speed.

Unfortunately, some experiments were not safe, and in 2006, during the shooting of a Top Gear segment, Richard could have died in the accident at the former RAF Elvington airbase near York.

While driving a Vampire jet car, Hammond traveled at 464 km / h and, according to rumors, tried to achieve the highest speed in a land vehicle and beat the existing record. As a result, the front-right tire failed, and the car span and toppled over before cashing.

Richard hit his head on the ground and damaged his eyes. So, he was transported in a helicopter ambulance to a hospital in Leeds. The investigation found that the presenter survived only thanks to his instantaneous reaction and driving skills.

Three months after the incident, Hammond made his first TV appearance on Friday Night with Jonathan Ross and said that he had been in a coma for two weeks and afterward suffered from post-traumatic amnesia and short-term memory loss.

Having returned to his TV show, which showed the Vampire crash episode in January 2007, Richard told the Sunday Times newspaper that the consequences were more severe than he had thought. He suffered depression, difficulties with emotional experiences, as well as absent-mindedness and inability to concentrate.

Hammond co-hosted Top Gear until 2015, but after Clarkson’s conflict with the management, he left the program and, organized his own TV show, The Grand Tour, together with his former colleagues. Having launched the program which was made exclusively for streaming from Amazon Prime Video, Hammond and his friends signed a 3-year contract, and the show aired once every week.

While filming in Switzerland, where the presenters organized electric vehicles racing, Richard had a narrow escape again. This time, he did not reduce speed on a mountain spiral road, and a Rimac Concept One ran off the road, turned over and burst into flames.

Fortunately, Hammond could escape in time, breaking his knee and getting slight bumps. After being taken to a local hospital, where doctors monitored the driver’s health condition, the TV journalist returned to work and in 2018 participated in shooting in London under the supervision of his wife.

At the beginning of his television career, Hammond married Amanda Etheridge, a columnist for the Daily Express. Now the couple has two daughters, Isabella and Willow.

Although the TV host does not like to tell about his personal life and does not post everyday photos on Instagram, reporters found out that since 2008, the family has lived in the ancient castle in Hertfordshire where they own 20 acres of land.

When Richard is not at home, his wife and workers look after the land and take care of numerous animals: cats, dogs, horses, pigs, and goats.

Since the biography of the TV presenter is associated with cars, his garage is an exhibition of modern and rare vehicles. In addition to the comfortable van, the Hammond family owns a dozen vehicles, 28 motorcycles, and a private helicopter.

However, the abundance of vehicles does not prevent Richard from running and leading a healthy lifestyle. The former presenter of the car program Top Gear opposes plastic and cosmetic surgery, keeps fit, and tries to follow modern traditions, wearing spick and span clothes that he buys in the most expensive boutiques of the UK.

As for his hobbies, the television host has learned to play the bass guitar and written the books “On the Edge: My Story,” “Or Is That Just Me?,” “As You Do," and others.

At the end of 2018, Hammond and his former Top Gear colleagues announced the release of the fourth season of the show The Grand Tour.

Although the vast fortune allows the television presenter to retire, he continues to film and write his column about cars.

In 2019, Richard voiced and promoted a new video game called The Grand Tour Game and took part in the Porsche 911GT3 R Tire Test in Portugal.

Richard Hammond has a net worth of $35 million.